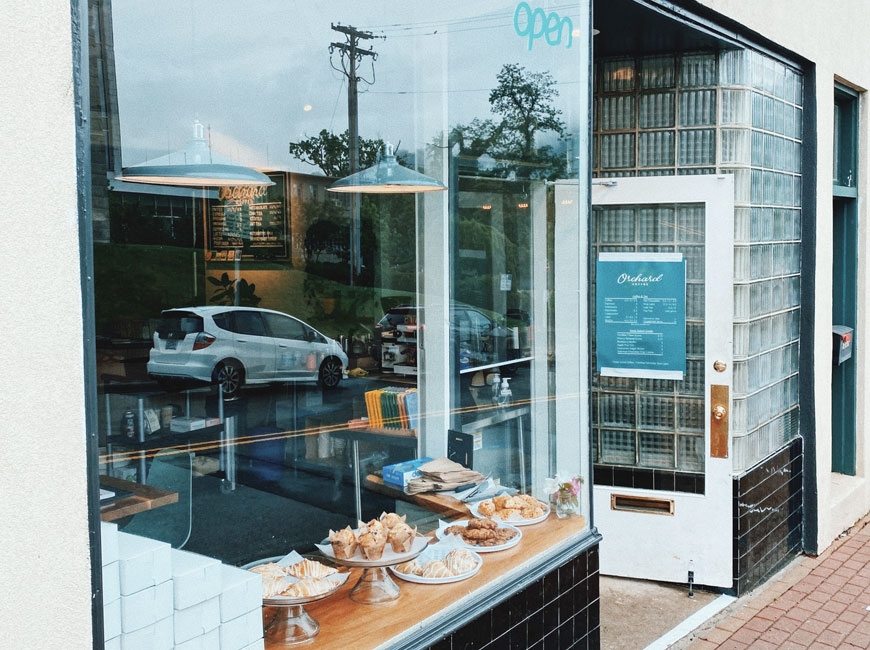 Orchard Coffee moved its bar to the front window to cope with COVID restrictions.

By Boyd Allsbrook • Contributing writer | When the COVID-19 pandemic and lockdowns hit Haywood County in March, business owners braced for the worst. Some closed their doors forever, while others scrambled for ways to reopen under the new normal. Months later, local entrepreneurs were able to give a retrospective on how they survived and changed with the times.

“We thought we were going to shut down in March. I had no doubt we were going under,” he said. Angel cited creativity and openness to unorthodox ventures as Elevated Mountain’s salvation.

“We were able to make hand sanitizer in those early months, which we still make. We have several major customers in the hand sanitizer business. That has definitely been a key thing for us. Honestly, we still need that revenue,” said Angel.

The distillery has also expanded into hosting COVID-safe live music events to fill the desperate need for entertainment beyond Netflix.

“We have live music three to four nights a week. Keeping in compliance comes with challenges but we were able to work those out. We were outdoors all summer and early fall; with the new restrictions we were able to move back indoors,” said Angel. “We’re supposed to stay under 100 people, which we can manage. People are good about wearing masks — I think they’re getting the message that to open up the economy we have to follow some rules.”

Though Elevated Mountain was hoping to get in on the live music scene pre-COVID, the pandemic spurred the process on and sparked Angel’s plan for it becoming a major music venue.

“We were planning on doing music before, but I think we further committed ourselves to it. We didn’t have the lights set up before, we didn’t have as many tables and chairs as we did, but we realized this is a whole market that’s not being met,” Angel said. “We have the best lighting and sound in any venue west of Asheville, and I would put it up against the best in Asheville. We’re making sure that we’re fully tapping into that to create a broader customer base.”

Between hand sanitizer and live music, Elevated Mountain Distillery has not merely survived — they’ve adapted to the times and managed to thrive.

“Our sales have done better than we expected,” said Angel. “You know, day drinking is an acceptable thing now. More people are staying at home — I was afraid that they would go for the cheap stuff, but it turns out, you know, when people wanna drink something, they enjoy something good.”

“I bought a couple thousand dollars’ worth of outdoor tables and chairs so people could sit outside,” said Bolton. “Because with the café as tiny as it is, you get one person at the counter ordering and you’re within 6 feet of other people. So having this space has been absolutely fantastic.”

Though she’d originally hoped to build this outdoor area into the patio space it is today, the pandemic forced her to act more quickly.

“We had eventually planned on it. We’re still bricking, still working on it, so we’re hoping to have that stuff done. But it was kind of like ‘OK, now we just have to do it, and we’ll be bricking and working on it around our customers.’ So it just happened a lot quicker than I thought it was going to,” Bolton said.

In addition to beautifying the patio, Bolton worked to make Third Bay a viable take-out option.

“We’ve been pushing the idea of people calling in and picking up orders. Obviously, when the businesses were restricted as far as people coming inside, we set it up where people could call in what they wanted, place their order. We’d send them an invoice on email where they could pay right online. Then they’d call us when they got here, and we’d have our gloves and masks on and take it right to their car,” said Bolton, adding, “and we still do that for people who aren’t comfortable!”

Though recent months have been challenging, Bolton says that her business is doing well financially — especially in this tourist season.

“Right now it’s going great,” she said. “I think people are starting to feel more comfortable with coming out and about. The last two weekends during our festivals we’ve had a wonderful amount of people coming in and checking us out. For the fact that we are new, it’s been very busy and we’ve been very blessed.’’

Just up the road from Third Bay, Cabell Tice, owner of Orchard Coffee, recounted how he’s dealt with the pandemic.

“It’s been very interesting to say the least,” he said. “As a business we’ve had to be malleable in ways that I didn’t ever think we would.”

“We had to move our whole bar to the front of our store. We wanted to do a takeaway service that was a whole new experience. That was one of the things that allowed us to push through the slow time. We brought everything to the front; we put pastries in the window, we put the bar right up there, and I feel like that was in a way reinventing ourselves,” he said.

This takeaway approach worked well; it was common to see people lined up along the sidewalk outside of Orchard’s new plexiglass-covered bar. Tice cited psychology as the driver of this widespread community support in those hard months.

“There’s something about a simple cup of coffee that makes life feel normal. When we closed, I feel like that was one of the things people realized they were gonna be without — that cup of coffee, that normalcy,” he said. “When we opened back up again, it was almost like a beacon where people felt like ‘OK, we can move forward in whatever changed way we have to, but we can feel normal.’”

“The act of going out feels profoundly normal,” he added. “The act of walking into a café and the transaction at the register can make you feel like things are fine, like the world isn’t upside down.”

In addition to modifying the café experience, Orchard began roasting their own beans right at the pandemic’s beginning.

“It was something we planned on doing for a long time, and then right as we were getting news of COVID, we jumped into that. Ultimately it was a fun way for us to start producing our own coffee and kind of get folks in town a little excited about taking orchard to their house.”

In compliance with lessened restrictions, Orchard is now beginning to return to some semblance of normalcy. The indoor café has reopened, and autumn’s tourist influx has filled its limited seats. “People coming back and getting into the space has also taken some getting used to as well,” said Tice. “Because people have to find their comfort level with COVID and we have way less seating in the café now, and we just do things a little bit differently. But ultimately, it’s giving folks the opportunity to come in, sit down, feel normal. We’re all navigating this together.”

Though October has been a record month for Orchard financially, Tice is still cautious.

“This October has been good for us,” he said. “This whole fall has been great, economically. I don’t think the tourists know that there’s COVID — but it’s like, we have one good month after a string of just six garbage months. So it’s nice to see one month positive, but we have a lot of not good months to look at.”

Ultimately, though, Tice is optimistic about the future of Orchard and the town as a whole. “Last week was the best week we’ve ever had. So I am hopeful, and I believe in the resiliency of our town and the people who come here.”