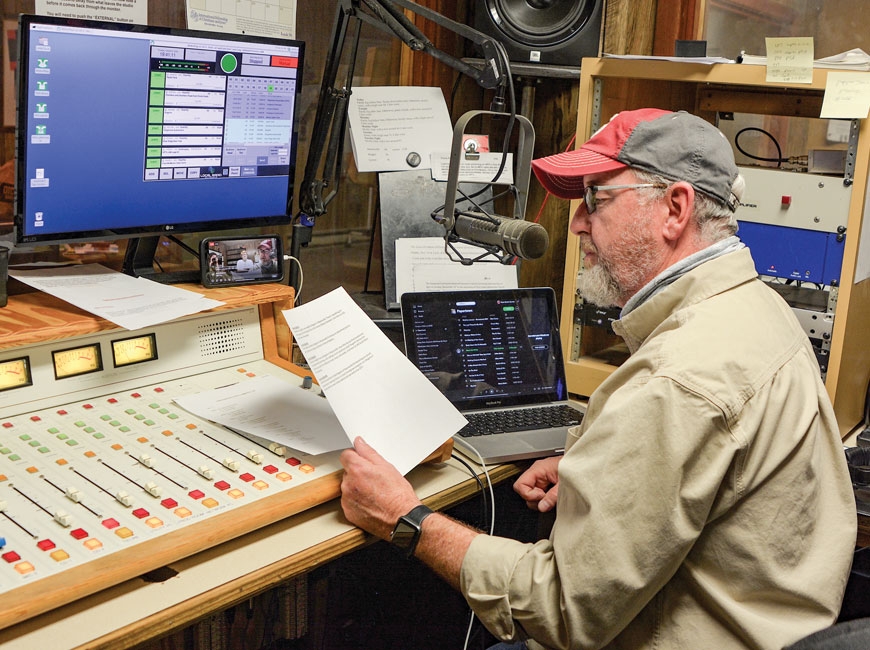 Not far from Main Street in Canton and the bright lights of the nearby football stadium is an unassuming one-story commercial building along Pisgah Drive. With a couple of vehicles in the parking lot last Thursday evening, a lone light radiates from the front window of WPTL.

Walking into the beloved community radio station, it’s as if one simply stepped back in time. Old-school wall paneling, large metal office desks and a plaid couch adorn the front room. Endless shelves of 45 and 78 rpm records are situated in the back.

With the smell of fresh barbecue sandwiches and French fries from one of the station’s advertisers wafting from a nearby table, a familiar voice echoes from behind the studio microphone and down the hallway. It’s Tim Surrett.

“We’re about one pot-bellied stove away from a feed store in here,” Surrett chuckled between commercial breaks on his twice-weekly show “Papertown Roots Radio.” “This is a small business and a small-town hangout — and that’s what we want.”

Bassist and dobro player for bluegrass act Balsam Range, Surrett is part of a Haywood County act that have become legends in recent years, as seen by the group’s numerous radio hits, chart-topping albums and International Bluegrass Music Association (IBMA) awards, including “Entertainer of the Year” (2014, 2018) and “Album of the Year” (2013, 2017). In 2018, Surrett was awarded the IBMA for “Bassist of the Year.”

Normally, Surrett and his bandmates would be on the road, performing onstage seemingly every weekend, a hectic schedule of hundreds of dates each year that the band has known since its inception in 2007. But, with the current pandemic and utter standstill in the music industry, Surrett was looking for something else to do in his free time, a passion project of sorts.

“I just got to missing this music, where it almost becomes a sacred thing to you,” Surrett said, noting his format of classic country, bluegrass and gospel selections. “And even more than that, it’s this interaction with friends, whether if they stop in the studio to pick a tune or request a song on our Facebook live stream.”

From 7 to 9 p.m. every Tuesday and Thursday, Surrett grabs the microphone and rolls right into the program. Alongside Surrett is his nephew, Carter Ball, a senior at Pisgah High School, who helps Surrett with the technical side of things, on top of reminding him when to take a commercial break.

“There’s a sense of community that centers around this station. For many people, this station is their ‘cup of coffee’ to start the day,” Surrett said. “For me, when I come in, I get fired up about the music and you just want to play it for other people.”

That deep community spirit is something that’s resided at the core of WPTL since it first went on-air in 1963. Between broadcasting local high school sports, folks calling in during the flea market program or the endless hours of timeless melodies radiating out to the farthest hollers of Haywood County, WPTL is a lifeline for a region that puts neighborly love and support at a premium.

“The original social media was the community radio station. People love this station. They tune in all day. Why change something that’s working?” said Terryll Evans, owner of WPTL. “When we acquired the FM frequency, it allowed us to expand more into the county. We’re broadcasting more sports and more music, expanding our online streaming and mobile app, too — we’re not just a Canton station, we’re a Haywood County station wholeheartedly.”

Only the second owners of WPTL in its long and storied history, Evans’ father purchased the station in 1978, ultimately relocating Terryll and her family from Florida to Western North Carolina the following year.

“If this station disappeared, I think you’d lose a lot — local sports, connectivity, knowing what’s going on in your town,” Evans said. “This station is part of everyone’s life here. We don’t even know who we’re touching out there while we’re on-air. And that’s what I love about it — we stay true to our roots.”

Sitting in the studio, one immediately observes and appreciates the lost art of community radio, something that’s a two-way street of sincerity and joy between Surrett and his thousands of listeners. With many tuning in from across the country and around the world, it’s that familiar voice or particular song that makes the distance from their hometown feel that much closer.

“I grew up in this town. I played ball in this town. So, to be able to do this radio program has been such an honor and full circle kind of thing for someone like myself who was raised with WPTL playing in our house,” Surrett said. “I love talking to the folks tuning in, playing those songs we all love — it’s just fun, and it means so much to so many people.”

Want to tune in?

‘Papertown Roots Radio’ with Tim Surrett is hosted from 7 to 9 p.m. every Tuesday and Thursday on WPTL, which is broadcasted on 101.7 FM and 920 AM.

You can also stream the radio station and any of its programs from anywhere in the world by clicking on www.wptlradio.net. The station is located at 133 Pisgah Drive in Canton. For more information, call 828.648.3576.