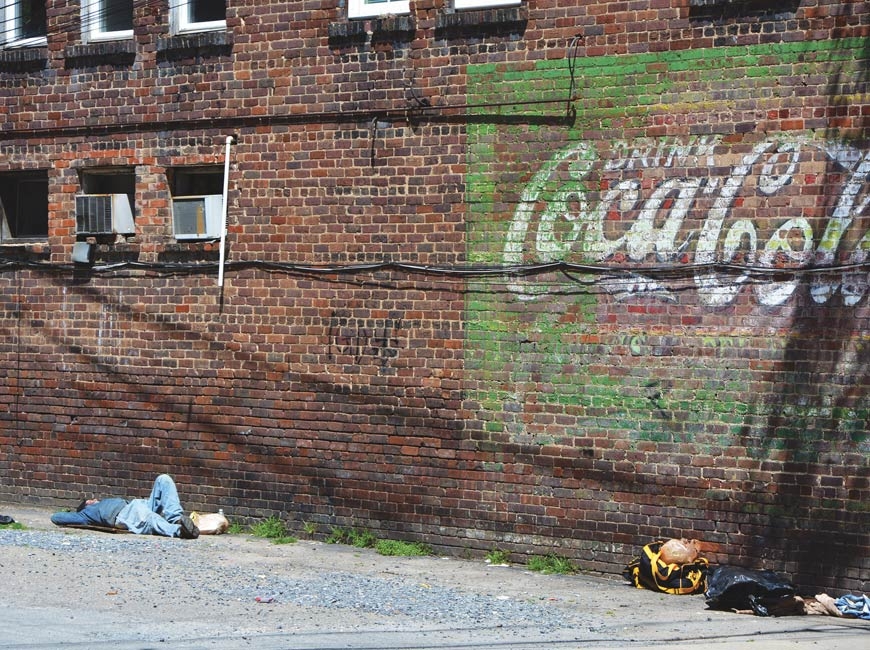 The work groups tasked with assessing different aspects of the Waynesville homelessness situation gave their reports on possible practical solutions for both homeless individuals and the community at large, and there was one  consensus — the pressing need for a low-barrier shelter.

“We talked about having various entry points along a continuum of housing services, which would be everything from a low-barrier shelter to permanent housing,” said Keri Gudry, a senior case manager for the Haywood Pathways Center. “It’s most likely necessary that a low-barrier shelter is a step that needs to be put in place in Haywood County in order to move folks along that continuum of care.”

The five work groups that are part of the Waynesville Homelessness Task Force are assessing different aspects of the issue — community connection, economic stability, education, housing and health. When the whole task force convened last week, each group discussed its findings. Gudry spoke in terms of “gaps” — areas where homeless people fall through the system’s cracks. Her group discussed expanding the housing options Waynesville currently has so needs can be addressed on an individual basis.

Seconding the need for a shelter that allows any struggling person a warm bed for the night was Waynesville Alderman Anthony Sutton.

“Folks can be asked to move from public places, but unless there’s a low barrier shelter, there’s nowhere for them to go,” Sutton said.

Juleah Berliner, a member of the group assessing health, elaborated on the same issue of homeless people simply having few places to go.

“There’s a gap people fall into when they’re discharged from jail and prison; there’s a tendency that those folks just get dropped off at the courthouse door, which is a problem for accessing resources but also for folks who are on probation and need to have an address within a certain timeframe. They’re on high risk of being reincarcerated,” Berliner said.

Contributing to the uptick in homelessness is this recurring cycle of trespassing, arrest and incarceration. People down on their luck or struggling with Substance Use Disorder may be ineligible to stay somewhere like Pathways. Having no other recourse, they set up wherever they can until they get cleared out by the police. This can escalate until they end up in prison. Once released, they have even less support than before — worse job prospects, nowhere to stay, and parole requirements to meet. To begin breaking this cycle, Berliner’s group recommended a low-barrier shelter as an entry point to help move people along the housing continuum and away from prison.

“Another gap that was identified by the folks who were involved with the low-barrier shelter was the lack of transitional housing in our area,” she said. “You know, a place where people could stay a little more stably and a little more long term than a shelter, as they’re getting their ducks in a row, getting feet under them, getting a job or some other arrangement where they could afford housing.”

Kasey Steffen, who worked on Maggie Valley’s low-barrier shelter, is hopeful that a similar place in Waynesville could work.

“It was kind of a neat little trial run to break down some of the worries people had with that, and watching people after getting a bed with no judgement, no strings attached, just letting them sleep and eat for a few days, how it changed their perspective and how they interacted with people,” Steffen said.

“We’re trying to meet them where they’re at and try to be that conduit to get them to those services that exist,” Trantham said.