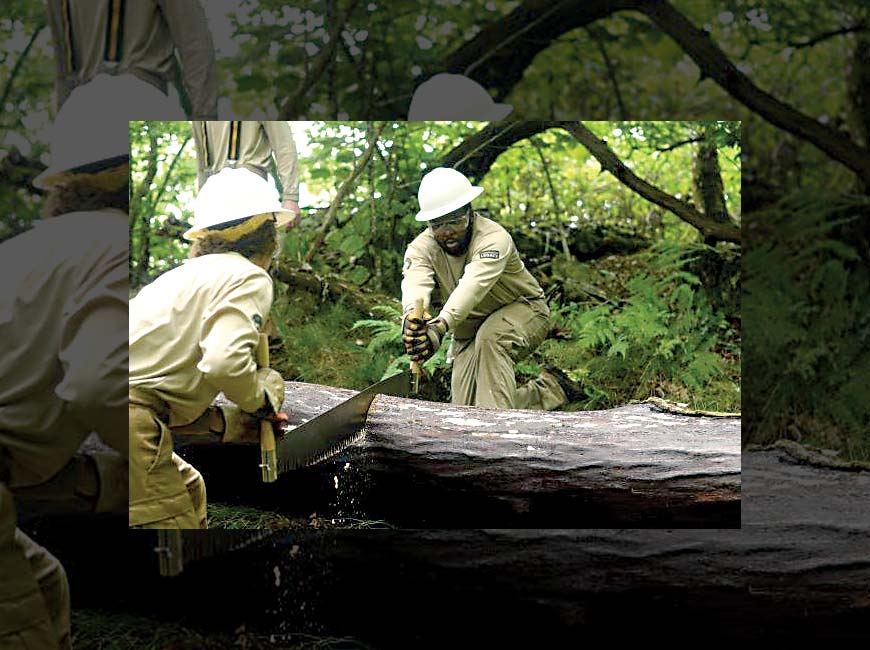 High-priority trail work on the Black Mountain Crest Trail in the Nantahala National Forest is now complete thanks to a crew of young adults with Conservation Corps North Carolina that worked with volunteers from the N.C. High Peaks Trail Association.

The CCNC crew consisted of five 18 to 24-year-old AmeriCorps members led by a trained crew leader. The group worked Aug. 3-12, together with volunteers completing 7.3 miles of trail maintenance from the base of Celo Knob at Bolen’s Creek to Deep Gap.

The group constructed large drains to reduce erosion and cleared the corridor with brush cutters to make the trail more accessible for hikers. The crew camped in the backcountry near the project site the entire time they worked.

The Black Mountain Crest Trail project was one of several projects the crew worked on for the United States Forest Service. The crew also spent seven weeks doing trail construction and maintenance in the Pisgah and Nantahala National Forests. Other projects included completing 3 miles of trail maintenance on the Sassafras Creek and Snowbird Creek trails in the Cheoah District and removing 62 fallen trees while doing trail maintenance on Shinbone Ridge in the Tusquitee District. It’s work that never would have gotten done with staff and volunteers alone.

“These young adults worked incredibly hard, often amid all kinds of weather conditions, to restore and improve trails in the Pisgah and Nantahala National Forests so they are sustainable and offer visitors a more safe, welcoming and enjoyable hiking experience,” said Jan Pender, CCNC program manager.

Conservation Corps North Carolina is a program of Conservation Legacy, a national program that supports CCNC and other local programs across the nation. This crew is sponsored by the Forest Service with additional support from the Duke Energy Foundation and Fred and Alice Stanback.

“CCNC has been a remarkable opportunity for me to work one last time in the wilds before I head out into the business world,” said CCNC Crew Member Peter Chege, of Raleigh, a recent college graduate. This was Chege’s second stint with CCNC.

“The first time around helped pay for my college, but now I just want to enjoy these mountains, which remind me so much of my native home of Kenya,” he said.