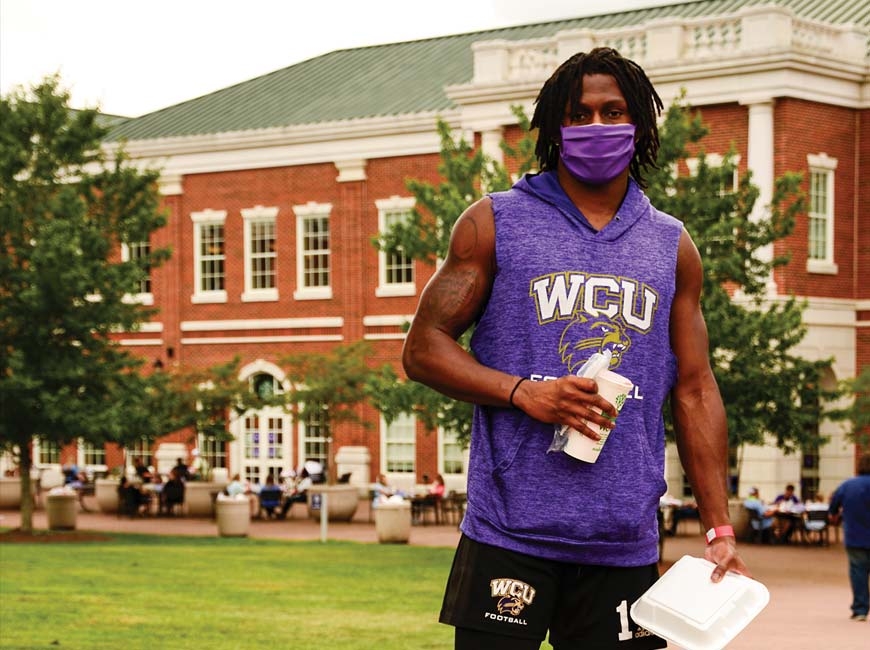 Even outdoors, masks are a frequent sight on the Western Carolina University campus. Holly Kays photo

The third week of classes is now underway at Western Carolina University, and the Jackson County Department of Public Health has identified the first cluster on campus.

One Sept. 1, the health department announced that 17 residents of Harrill Hall, which houses a total of 301 students, had tested positive for the virus. The students are in isolation and the investigation is ongoing as officials seek to identify close contacts of those positive cases.

“We expected there to be cases related to our campus as more than 9,000 students returned for residential in-person instruction this fall,” said Chancellor Kelli R. Brown. “We have extensive protocols in place and will continue to execute our quarantine and isolation procedures. Public health is a shared responsibility — and it is one that we take seriously.”

In a series of interviews conducted on campus Aug. 24, students had an overall favorable response when asked how well they believe the university is handling the pandemic.

“I think that Western’s been doing a really good job,” said Preston Pyatt, a Franklin resident and fourth-year student who is beginning his first year at Western. “They provided us with hand sanitizer and face masks. They have all the regulations, like whenever you’re inside you have to have a mask on and they recommend whenever you’re (outdoors on campus) to have a mask on, which a lot of people do keep up with. I feel like a lot of the regulations they’ve put in place really do prevent the spread.”

In addition to the mask mandate, the university has also lowered classroom density, erected outdoor tents throughout campus, adopted extensive personal protective equipment cleaning procedures and created many other protocols as well.

“I’m hoping that we get to be here for a good while, but I’m not expecting to be here the whole semester, unfortunately,” he said.

For freshman Khadija Davis, the typical first-year challenge of finding one’s place in a campus of 10,000 people has loomed larger than the fear of COVID-19.

“I was very nervous because when I first got here, I was kind of by myself,” said Davis, who came from Charleston, South Carolina. “My friend wasn’t able to move in until the 14th. It was new meeting new people and just having an experience of being on campus and everything. I just felt like this is going to be my new home, and I have to get used to it. So far I’m adjusted.”

Having to wear a mask everywhere still feels a little weird, she said, but after spending the last part of her senior year of high school behind a computer screen, it’s “liberating” to be on campus, even if many classes still take place online.

This semester is junior transfer student Janeissa Romero’s first year at Western, but COVID-19 didn’t scare her away.

“I work in health care, so I know what it’s like,” said Romero, who is a medical assistant. “I’m not too nervous about it because I know how to deal with it at this point.”

For senior Trace Cook, the hardest part has been foregoing some of the social aspects of campus life that make WCU such a great place to be — especially given that this is his last semester.

“The most difficult thing is resisting the urge to be overly social, because it’s just a jovial place,” he said. “You have all these young people and you want to go out and fist bump and you want to get in close groups and do stuff. That’s been a little disappointing that part of it has been reduced, but other than that, my classes are fascinating as usual, studying what I love.”

Instead, he spends his evenings out by the fountain playing guitar, or else participating in worship with the Campus Catholics — the group has a good social distancing system, he said.

“I feel pretty safe with the parameters the university has set up,” he said. “However, I am a little disappointed in the way some of my fellow students are disregarding those parameters, and that concerns me, but the fact that I’m following those parameters and social distancing makes me feel secure. My largest concern is that everyone who is not paying attention is going to get us sent home, and I’d like to finish my final semester here on campus.”

However, the discovery of the cluster may well cause that trend to reverse in the current week. On Tuesday, Sept. 1, 12 student cases were confirmed in a single day.

Despite the lower number of cases, the positivity rate Aug. 24-30 was slightly higher than that of Aug. 17-23, with 13.2 percent of 220 tests coming back positive last week as opposed to 12.4 percent of 177 tests the previous week.

Current data about COVID-19 numbers at WCU is available at www.wcu.edu/coronavirus/reporting.aspx.