This must be the place: But long as there are stars above you, you never need to doubt it 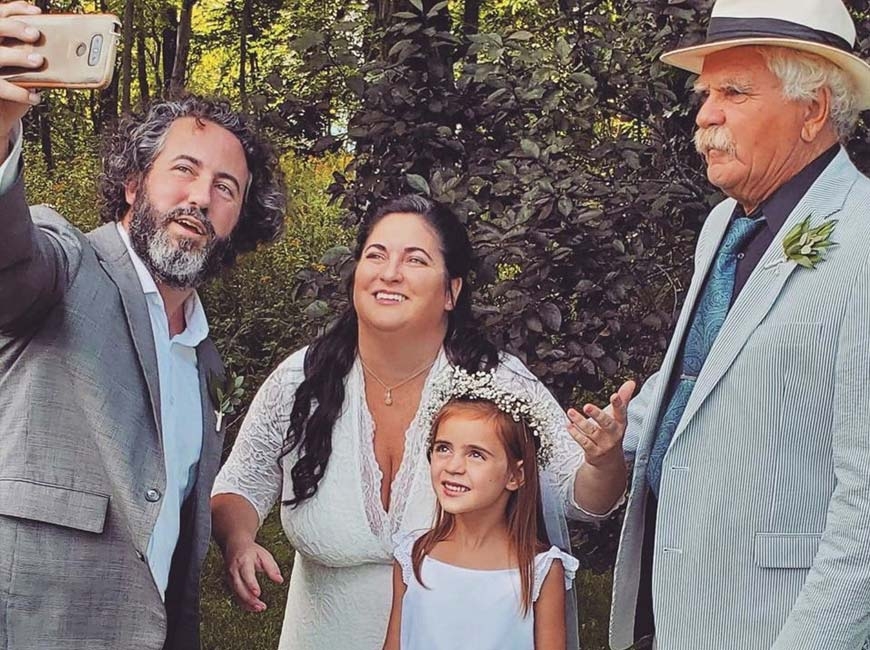 Pulling onto Lake Street last Saturday afternoon, an odd sense of self flowed through my veins while cruising through Rouses Point, New York. My hometown until I left for college, the tiny Canadian Border community had seen better days. And yet, Saturday was another happy occasion for my family, who has lived in that town for generations.

Looking into the rearview mirror of my truck, I quickly fixed a few out of place hairs and adjusted the collar on the dress shirt. My little sister was getting married in an hour and I had to make sure I was presentable for her special day. Turning off Lake Street, it was a trek across the bridge over Lake Champlain and into northern Vermont.

Located at the southern tip of Isle La Motte, Vermont, the Fisk Farm was founded in 1788 and has remained a historical, cultural and social hub of sorts for the small island. It was also exactly where my sister had envisioned proclaiming her love for her significant other in front of a small group of family and friends.

Coming into 2020, my sister, Kate, was a single mother of a 6-year-old, my niece, Lucy. A hardworking educator in the local school system, Kate’s walked a tough road raising her daughter and creating a safe and nurturing home and life for the two of them.

And it was right before the pandemic and shutdown that a familiar face from the past reached out to reconnect. His name is Josh, and he’s someone I’ve known pretty much my entire life. Not only did Kate and I go to elementary, middle and high school with him, we were teammates during the basketball and cross-country seasons, too. As well, for a brief period, he and Kate dated in sixth grade.

Even after high school and the impending entry into adulthood, Josh and I kept in touch. We’d cross paths whenever I was home for spring break or the holidays during college, or when I wandered back to the North Country from time to time while I chased after a career in the written word, onward into the last eight years of living in Western North Carolina.

Thus, Josh and Kate started dating pre-Covid. None of us knew about it, and it remained a secret for a few months while they hunkered down together during the shutdown. Soon, the shelter-in-place orders were lifted as everyone popped their heads out of their homes and started to catch up with each other over this, that, and the other.

By late May, I’d decided to come back to the North Country and spend the summer in my old stomping grounds. It was a silver lining amid all the chaos and unknowns of yesterday, today and tomorrow. And throughout this period, I not only rekindled connections with others, I was also able to spend quality time with Josh, Kate and Lucy: barbecues, bonfires and beach bumming.

Summer rolled along and it was decided that Josh and Kate wanted to get married. August 22 soon appeared and there I was standing in the back of a small gathering at the Fisk Farm: making sure the background music was working properly, but mostly taking in the whole scene unfolding before my eyes.

It was something to just kind of look around and observe. My rough-around-the-edges father seemed softened and in awe of the moment. My sentimental mother was filled with tears of joy. With a kiss to seal the nuptials, Josh and Kate walked back down the aisle and into the next chapter of their lives together.

The wedding reception was held at Josh’s parents’ home in nearby Champlain, New York. It was the same house I remembered when I would go over there as a kid to play video games or listen to music. A large white tent was situated in the driveway of the farmhouse, soon filled with laughter and drinks held high.

The next few hours were a joyous blur of champagne toasts, heartfelt speeches from both families, dancing and numerous camera flashes from seemingly every direction. We ate and drank to our heart’s content. We smiled and fondly remembered the past. We saluted each other to a bountiful life of love and adventure.

As the midnight hour appeared, I found myself sitting at one of the tables underneath the big white tent. Those left at the reception were either still dancing or situated around the bonfire in the backyard. I cracked a cold Molson Canadian can and sipped with gusto.

And it was in that moment when The Tragically Hip’s “Bobcaygeon” came over the speakers. An anthem of sorts in the North Country, the melody echoed across the farmhouse property and out in the darkness of the surrounding neighborhood.

I sipped the Molson and listened, “So, I’m at your house this morning, just a little after nine, ‘cause it was in Bobcaygeon, where I saw the constellations reveal themselves, one star at time ….” The T-Hip always seem to conjure and capture the ideal feeling of wherever one may find themselves, either by chance or by circumstance.

Shifting my glance from those near the bonfire, I focused on Josh and Kate in the distance. They held each other close, two souls in harmony, ready to take on whatever life throws at them. For me, I now have a brother-in-law, more a brother-in-arms. And I couldn’t be happier.