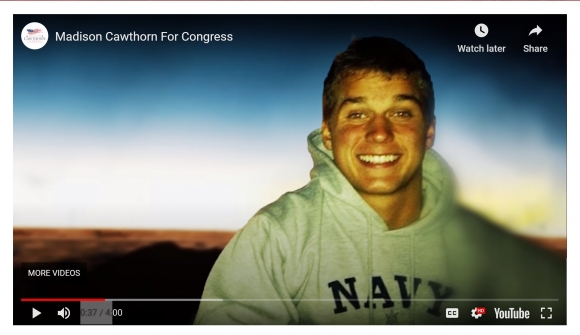 A campaign video says Cawthorn "planned on serving his country in the Navy with a nomination to the U.S. Naval Academy in Annapolis. But all that changed in the spring of 2014 when tragedy struck."

“Madison was homeschooled in Hendersonville and was nominated to the Naval Academy by Rep. Mark Meadows in 2014,” according to the 11th district candidate’s website. “However, Madison’s plans were derailed that year after he nearly died in a tragic automobile accident that left him partially paralyzed and in a wheelchair.”

But in a 2017 sworn deposition obtained by AVL Watchdog, Cawthorn admitted his application to the Academy had already been rejected before the crash. The campaign did not comment, despite repeated requests over several days.

The Naval Academy reference is a key part of the 25-year-old’s public portrait, featuring prominently in his campaign speeches and interviews. Cawthorn is careful to say he was nominated and that his plans were “derailed” by the crash, two statements that when taken together create the impression he was headed to Annapolis to attend the prestigious Academy were it not for the 2014 crash.

A congressional nomination is just a first step in a highly competitive process to enter the Naval Academy. In 2014, more than 17,000 students sought admission by seeking nomination from a House or Senate member, the President, the secretary of the Navy and other sources.  In a typical year, according to the Academy’s website, about 5,000 of these applicants are nominated, as Cawthorn was.

But – after rigorous screening by the Academy’s own selection committee that includes physical fitness, leadership abilities and performance in school and on standardized tests – barely one in five of the nominees wins appointment and enters the Academy. Cawthorn was among those rejected.

Yet he has not publicly corrected the misimpression that he would have entered the Academy in the class of 2018 were it not for the auto crash. Nor has he attempted to correct many TV interviewers who, in their introductions, often repeat the phrase that his aspiration was “derailed” by his injuries.

His campaign website and Instagram page include a photo of Cawthorn wearing a Navy sweatshirt and another of him participating in a training exercise with others, all in the group wearing military fatigues and inflatable jackets pulling boats onto a beach. Cawthorn calls the group “my squad.”

Cawthorn, then 18, was a passenger in an SUV driven by his friend, Bradley Ledford, that crashed while returning to North Carolina from a spring vacation trip in Florida. According to the Florida Highway Patrol accident report, Ledford admitted “dozing off” while driving, lost control of the car and crashed into an abutment. The vehicle burst into flames. Cawthorn spent much of the next year undergoing surgeries and therapy. Treatment for pain in his legs continued more three years later, he said in the deposition.

Ledford’s insurance carrier, Auto-Owners Insurance, offered Cawthorn $3 million, the policy limit, to cover his treatments and settle the claim within days of the crash, according to testimony and court records. But under the advice of his lawyer, Cawthorn initially balked at accepting the $3 million and sued Ledford’s insurance company for $30 million for acting in bad faith.

The lawyer asked Cawthorn: “[A]t some point in time, you were notified by the Naval Academy that you did not get in?”

The lawyer continued: “Was it – it was before the accident?”

Cawthorn answered: “It was, sir.”

Cawthorn did not reply to multiple emailed requests for comment from AVL Watchdog. The campaign press secretary, Angela Nicholas, replied on Saturday that “we will get you something as soon as it is ready.” A follow-up request for comment on Sunday received no reply.

The candidate also revealed in the deposition that he had been unsuccessful in his later enrollment at Patrick Henry College in Purcellville, Virginia, a small evangelical Christian school often attended by homeschoolers and that has a reputation for successfully placing graduates into high federal government positions.

After entering the school in August 2016 to study political science, he dropped out after one semester and earned mostly D’s, Cawthorn testified, primarily because his injuries interfered with his ability to learn.

When the insurance-company lawyer asked him the reason for leaving Patrick Henry, Cawthorn responded with a single word: “Heartbreak.” He added that his then-fiancé left him for another classmate, speculating it was because she “didn’t get along with my mother.”

Cawthorn said he considered applying to two other schools with online programs, the Harvard Extension School and Liberty University, but didn’t follow through.

The reasons for the Naval Academy’s rejection of Cawthorn are confidential. One of the admission criteria is a student’s performance on the Scholastic Aptitude Test – the three-test SAT of a student’s abilities in math, verbal comprehension and writing – required by many colleges and universities.

A perfect score is 800.  Under questioning from the lawyer, Cawthorn said he believed he had received a 590 in math, a 620 in verbal and a 650 in writing. Highly selective colleges and universities such as the federal academies typically expect applicants to achieve scores in those tests of 700 or above.

After his brief stint in college, Cawthorn has said he became a a small businessman involved in real estate and other investments.  At the time of the deposition, however, Cawthorn testified that he had no job and that his only income came from a $700 monthly Social Security disability payment. When Burge pressed him about investment income earned from the insurance settlement, Cawthorn said the investments were handled by his older brother, Zachary Cawthorn, a professional financial adviser.

Cawthorn is the sole owner and employee of an investment firm called SPQR LLC, created in August 2019. On the financial disclosure form he filed as required by all candidates, he reported no income from it. In the 2017 deposition, Cawthorn said the only jobs he had held to that point was as a manager in a Chick-fil-A restaurant while a teenager, and after the accident as a staff assistant in then-U.S. Rep. Meadows’ district office.

Excerpts from Cawthorn’s deposition appeared on the information-sharing app Reddit over the weekend. AVL Watchdog obtained a full copy of the deposition, which was filed in federal court in Orlando in conjunction with Cawthorn’s lawsuit against the insurance carrier.

The lawyer’s questioning about the trip that ended in the crash also revealed that Cawthorn and his friend, Ledford, had engaged in the dangerous practice of switching seats while driving on the highway, from the passenger seat to the driver’s seat and vice versa. There was no suggestion in the deposition that the two friends were changing seats when their SUV crashed, and the state trooper reported no evidence that Ledford, the driver, was impaired by alcohol or other substances.

Cawthorn said the two “changed positions” while the car was in motion “to save time.” Asked why, he attributed it to being 18 when he, like others of that age, felt “invincible.”

“But now, looking back obviously, I see that there was some major problems with doing that.”

AVL Watchdog is a nonprofit news team producing stories that matter to Asheville and Buncombe County. Tom Fiedler is former executive editor of The Miami Herald and a Pulitzer Prize-winning political reporter. He lives in Asheville. Contact us at This email address is being protected from spambots. You need JavaScript enabled to view it..