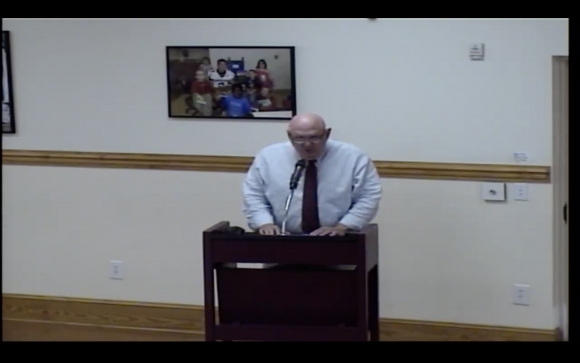 “I think if you look at what happened, he made a mistake, we took action as a board, we took what happened very seriously, we did our investigation and found really no racism or bias,” Chairman Chuck Francis told The Smoky Mountain News July 27.

During a special called board meeting held July 22, Francis read the following statement regarding Nolte’s “post on social media that could be considered offensive or insensitive.”

… this board directed Dr. Nolte to meet with members of the community, hear their comments and concerns and develop a plan that would not only bring about healing but also set the framework to address inequalities as we move forward.

These actions were not taken as a form of punishment nor as a political statement, but as a responsibility and duty of our elected offices.

During this time an investigation took place to examine the whole of the body of work of Dr. Nolte’s tenure with Haywood County Schools, the investigation found no pattern of bias or racism.

In fact, it is fair to say that Dr. Nolte’s career with Haywood County Schools has been one of exemplary service and community mindedness.

Furthermore, Dr. Nolte, upon recognizing the post was hurtful to others, removed the post and quickly apologized.

In our world today, the highest mark of character is to recognize a mistake, apologize and seek forgiveness.

Tonight, Dr. Nolte has submitted the action plan as requested, and it will be attached with this announcement.

He has met with members of the community, to include the Haywood County NAACP and the MLK Committee, as well as other citizens.

Dr. Nolte and this board are committed to continue to review the policies of Haywood County Schools, and make changes to ensure equality and equity for all students.

After the statement was read, Board Member David Burnett moved to reinstate Nolte, effective immediately. The motion was seconded by Vice Chairman Jim Harley Francis, and passed unanimously. Board member Ann Barrett was absent, and fellow board member Ronnie Clark joined the meeting by telephone.

“I understood they wanted me to focus on developing a plan or process moving forward, and I probably would have done something very similar had I been in their shoes,” Nolte said.

The plan, submitted by Nolte, details the steps he took during the investigation, which included “personal reflection, learning more about bias and meeting with people with varying beliefs and ideas about moving forward.”

Included in the plan is a list of more than two dozen people Nolte spoke with, but Nolte added that dozens of others sent him emails and text messages.

“I learned that we’re in a very divided society. I think probably we already knew that, based on national news coverage. There were large groups of people from various backgrounds, various races, who told me to stop talking about the event and to move forward in a positive way. That was the majority of people that I spoke with,” Nolte said. “Some of those folks were very unhappy about the post, and some of them said they understood why I would have posted and that I didn’t mean any harm. There were certainly people on either end of the continuum. Most of them said to me, we need to be unified, we’ll be better off together.”

The plan also details what actions will be taken going forward to foster unity and limit divisive bias within Haywood County Schools.

“I think the plan is a good start and the thing the board wanted to make clear was that it’s not just Dr. Nolte, the board’s going to be included in the overall plan,” Francis said.

Implicit bias training will be identified and implemented beginning with the superintendent and Board of Education members, according to the plan, but Francis said he hoped it would also end up being presented to teachers and students as well.

A committee will also be established to advise the superintendent regarding these efforts.

“The committee will include individuals from the local community and schools who have a diverse range of perspectives and experiences,” reads the plan. “School Board Policies will be reviewed to assure they promote unity and limit bias. The North Carolina School Boards Association will be used as a resource for the review. This work will begin with examining ways to address non-school displays that cause disruptions, are divisive, and hinder unity.”