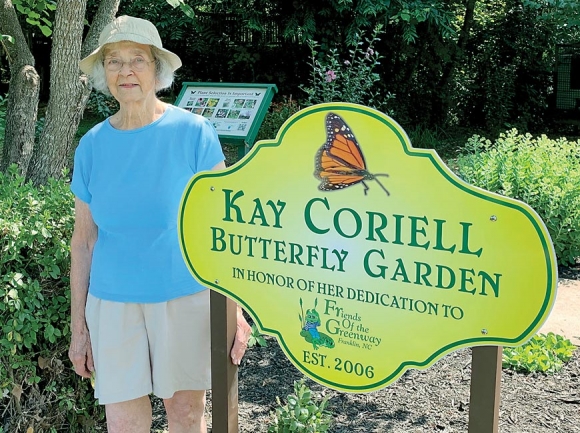 Kay Coriell, a longtime supporter of Franklin’s greenway along the Little Tennessee River, has been honored for her efforts by serving as namesake to the Friends of the Greenway’s butterfly garden.

The Kay Coriell Butterfly Garden, as it is now called, has been her passion since it began in 2006. Coriell led the restoration and revitalization project in 2017 and continues to coordinate plantings and maintenance needs today. Through her efforts, the Greenway is listed in the National Recreation Trails, included in the North Carolina Birding Trail, and the Butterfly Garden is registered as a North American Monarch Waystation.

Coriell’s involvement with the greenway stretches back even further than that. During the 1990s, she was volunteering with the original group that had the dream of a path along the Little Tennessee River. She has been a member of Friends of the Greenway since its inception in 2001 and has volunteered in numerous capacities over the years. She has been on the Friends of the Greenway Board and has served in every officer position. During some very dark times, it was her contribution that kept the organization going as she filled several officer positions at the same time.