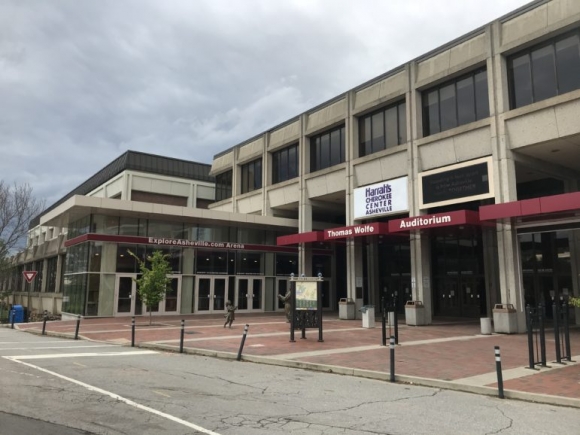 Funds from the Buncombe County room tax have been used for renovations of Harrah’s Cherokee Center Asheville. Photo by Mark Barrett

The change would have reduced the share of room tax money to market and advertise Asheville as a tourist destination and increase the amount that could be used for local projects benefitting visitors and residents – a hot-button issue before Covid-19 and Black Lives Matter protests.

As it is, the local share of the tax revenue is smaller in Buncombe than most other North Carolina places that levy a tax on tourist destinations like Charleston, S.C., Charlottesville, Va. and Pigeon Forge, Tenn. And unlike in the neighboring states, no hotel tax money is available to pay for indirect costs of tourism, such as increased policing and maintenance of streets and sidewalks.

Sen. Chuck Edwards, a Henderson County Republican whose district includes part of Buncombe County, said the General Assembly’s focus on the pandemic sidelined the bill. Edwards said a measure could emerge in 2021.

The 6 percent tax is charged on stays at hotels, motels, bed and breakfasts, vacation rentals and other short-term lodgings and paid to Buncombe County. But the county is required by law to turn the money over to the independent Tourism Development Authority, which is dominated by hospitality executives, an industry with considerable sway in Raleigh.

Three-quarters of the money goes to advertising and other forms of promotional media that directly benefit the industry and one-quarter goes to what’s called tourist product development: Capital projects that are likely to attract more tourists to an area, such as construction of sports fields or greenways that also are enjoyed by local residents.

Elsewhere in North Carolina, the split is typically two-thirds for advertising and promotion and one-third for local projects. Buncombe hoteliers agreed in February to switch to that formula with an amendment to the law that at the time would have made about $2 million more available for investments in local projects. Who got the money between the city, county and area nonprofits – and how much – would have been up to the TDA.

The legislation also would have expanded membership on the TDA board, weakening the hotel industry’s voting majority, and increased the types of projects that could be funded.

But all that was before the pandemic tanked tourism and the resulting room tax proceeds. By the time lawmakers entertain a change to Buncombe’s formula again, hoteliers may be less willing to give up marketing funds, and local governments will have more need for additional revenue than before.

No matter what proposal emerges, there is little chance that Asheville will be able to spend a large portion of room tax money on ordinary government services like tourist destinations in other states do.

Buncombe is not the first local government in North Carolina to push for more flexibility in the tax proceeds to cover costs associated with visitors, said Scott Mooneyham, a spokesman for the N.C. League of Municipalities.

But the travel and tourism industry has stood in the way, opposing use of the money on anything other than marketing or capital projects intended to increase hotel visits. “It’s been very difficult to get that kind of legislation passed,” Mooneyham said.

Jim Muth, a former TDA chairman involved in talks to change the Buncombe room tax law, said he does not know how industry groups gained so much influence. “I just know that what they say goes.”

From consensus to controversy

Hoteliers say it’s fair for their industry to control spending of tax money they collect and that tourists boost the local economy.

But critics say tourism has hurt the local quality of life. They see the TDA’s advertising spending as a government subsidy to the lodging industry by reducing the need for hotels to spend their own money luring tourists to Asheville.

Some have even called for abolishing the Buncombe TDA.

It “has significantly grown an industry that is primarily fueled by the contributions of workers, artists, and musicians who do not have secure living wage jobs, sick leave, or health benefits,” Asheville resident Ami Worthen wrote the board recently. “You have focused on growing revenues without proportional investment in sustainability for those caught up in this unchecked growth.”

John Winkenwerder, a local hotelier who served for years on the TDA board, said dissenters probably were not in Asheville in the 1980s or early 1990s when many downtown buildings sat empty, their storefronts boarded with plywood.

Winkenwerder sat on the first TDA board created after the 1983 law that established Buncombe’s room tax, then at 2 percent. In 1985, the tax rate grew to 3 percent, and the few hundred-thousand dollars it produced for the TDA generated little controversy, he said.

A consultant’s report in the late 1990s recommended enticing tourists to extend their stays, and the TDA asked the legislature in 2001 to increase the room tax to 4 percent with the extra money going toward creating attractions that might keep visitors in town longer.

The 75 marketing/25 local projects split remained, even as other North Carolina communities got larger shares of their hotel tax.

“Traditionally in Buncombe County, the legislative delegation has been very supportive of just adopting the recommendations from the hotel industry, and that’s what they wanted,” said Brownie Newman, chairman of the Buncombe County Board of Commissioners.

In 109 of the 182 North Carolina cities, towns, counties and special tax districts where the legislature has authorized a tax, the split is two-thirds marketing/one-third local projects.

Talk of changing Buncombe’s formula began in earnest in 2015 as hoteliers worried Asheville would soon have an oversupply of hotels, threatening profits. They wanted a tax increase, and Asheville city officials wanted additional money for affordable housing.

But local officials say that before the parties could come to an agreement, hoteliers persuaded then-state Sen. Tom Apodaca, R-Henderson, to push legislation increasing the tax to 6 percent – and keeping the 75/25 split.

The move “created some real hard feelings in the community,” Newman said. “The concerns of people in Asheville were kind of run over by the hotel industry and the Republican majority in the legislature at that time.”

Asheville Mayor Esther Manheimer told the Asheville Citizen Times at the time that while the city did not get what it wanted, hoteliers "probably did have the political pull with Apodaca to run roughshod over us."

Not what the neighbors do

Taxes on lodging and other things tourists buy are handled much differently in neighboring states that compete with Buncombe County for leisure visitors.

If you visit Pigeon Forge, half of your room tax will go toward tourism marketing and infrastructure and half to support public schools. You’ll pay a food and beverage tax for dinner and an amusements tax if you treat the kids to a go-kart ride.

The businesses you patronize will pay a gross receipts tax, and you’ll pay a local sales tax on all the transactions. The money from all the taxes goes into the city’s general fund that pays for some tourism marketing but also for police and fire protection and other services like libraries and street maintenance.

Neighboring states also collect government revenue off tourists in other ways. Some cities charge meals and beverages taxes. Charleston collects a 50-cent tax on every person who takes an organized tour. In Georgia, proceeds from a $5 fee-per-night on hotel stays help build and maintain roads.

In North Carolina, property tax is the main revenue source for local governments. Only a handful can charge a meals tax and a little less than a third have any direct control over how room tax proceeds are spent.

Local governments typically have to turn tax proceeds over to a tourism development authority made up of hospitality industry representatives like the Buncombe TDA. Counties and cities must submit an application to the TDA requesting money.

North Carolina laws on occupancy tax use are more restrictive because the hotel industry volunteered to be taxed when the first occupancy taxes were authorized -- and because the industry has held enough political clout to limit non-tourism uses of the money, said Vince Chelena, executive director of the N.C. Travel Industry Association. His association is one of at least three industry groups that lobbies to focus the tax money on tourism.

“We as an industry … went to the General Assembly in 1983 and said we would like to tax ourselves and we have ideas on what we want to do with that money,” Chelena said.

In the view of critics like former Asheville City Councilman Gordon Smith, the whole system stinks.

It makes as much sense as allowing, say, breweries to control the tax money collected at their facilities or any other industry to direct the spending of the taxes it generates, he said.

Tourists strain the city’s infrastructure and services. “It seems to me only fair that” local governments get a bigger share of room tax money, Smith said. That could come either by splitting proceeds 50-50 between advertising and capital projects or by appropriating some funds directly to local governments, steps he said would still “allow millions of dollars for (tourism) marketing.”

But both would require legislative approval.

“I don’t think it would have much of a chance,” Chelena said. “We would fight that inside the General Assembly.”