Who is your neighbor? Being Black in Waynesville 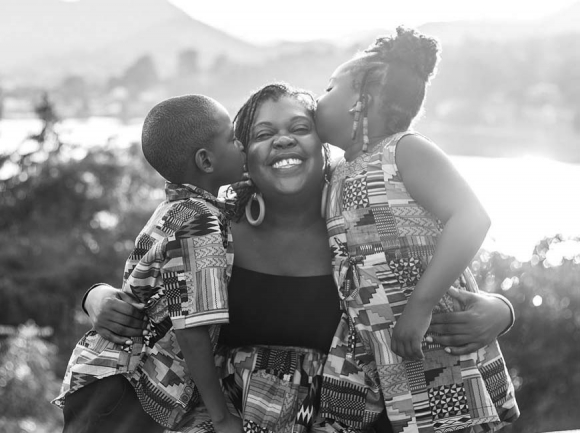 By Brandi Hinnant-Crawford • Guest Columnist | In 2014, on my 30th birthday, I got a call from my former department head offering me a job at Western Carolina University. I was ecstatic; I was going home. Upstate New York winters are not kind to girls raised in the south (aka GRITS), and the Old North State is the state I love more than any other in the union — everyone was happy. Two years after living in Jackson County, I heard about these amazing kindergarten classrooms at Hazelwood Elementary; I wanted my kids to have this wonderful experience. After apartment living for two years, I moved into a colleague’s house in Waynesville. Finally—the west was feeling like home. My kids had a yard, and I had Belk (Modern, Southern, Style!). Plus, Waynesville is halfway between my Cullowhee office and Biltmore Park classroom. Jackpot!

In the New Testament (the 10th chapter of Luke), Jesus tells folks they must love their neighbors as themselves, and one smart-aleck says — well, who exactly is my neighbor. And then Jesus shares one of our favorite parables about the good Samaritan. Living here has made me question time and time again—who is my neighbor—and how do you make someplace home when it is apparent the neighbors (or at least some of them) don’t want you.

I am an outsider, and I recognize there is outsider/insider culture here. However, that becomes amplified when you’re a Black woman outsider. I cannot speak for the whole 2% of the Waynesville population that is Black, but for the four in my household we have often asked:  who is our neighbor, who can we trust, whose home would we be safe in, and who might we need to avoid.

We like to think of racists as people in sheets, neo-Nazis, “skinheads” or as bad people with ill intent. All racist acts are not blatant; some are subtle. Racially charged interactions happen between people (even good people) constantly, sometimes in the form of microaggressions. Sometimes they are unintentional (though everything is not unintentional, just as all bias is not implicit). When people are afraid to talk about race because it makes them uncomfortable, racially charged interactions happen more often. When people believe they are colorblind, they fail to see how their actions may impact people of different groups disparately. And there are people who think issues of race belong exclusively to people of color, and with the small percentage of that Waynesville population that is not White, such issues cannot exist here. Whiteness is not the absence of race; whiteness is a race too; and racial issues also belong to White people. I believe the discomfort, colorblindness, and “that’s their issue” conflate in Waynesville for a perfect storm. So, I am writing to tell you what it is like to be Black woman in Waynesville:

It’s a local bank teller speaking to you as if I had never been in a bank before.

It’s a pediatrician suggesting your kid has a behavioral problem when they’ve only been around him 3 minutes.

It’s a random man coming up to you in a book store saying, “race isn’t real,” and when you respond “you’re right, race is a social construct but the consequences of race are real,” and he tells you, “I can see you’re a thinking person.”

It’s walking into Walmart and a man telling your 5-year-old son, “We stand for the flag and kneel at the cross” in reference to Colin Kaepernick.

It’s being told you can’t use the bathroom at a gas station, while you are dancing trying to hold it in, and have already purchased something — since you figured bathrooms were for customers — because it is being cleaned, only to see it’s not.

It’s going to the Tuscola-Pisgah game, because you’re trying to be a part of the community, and being jarred by all the Confederate flags. They can stand for heritage to you, but as the fifth generation descendent of enslaved people in this state, they remind me of state-sanctioned violence, vigilantism, bondage and captivity — and those fighting to uphold that institution.

It’s working with Haywood County Schools teachers and hearing one say they are afraid to write a referral for a kid calling another kid “nigger” because they don’t know if administration will support it or if parents will complain. (Which let me know my voice as a parent does not mean much in this system and my Black kid doesn’t matter as much as the one doing the name calling.)

It’s hearing about the fights that happen as a consequence of racially motivated bullying in upper grades (from other Black parents) and trying to decide at what age do you absolutely need to make sure you have your kids out of the district.

It’s going to a multiethnic gathering of churches at Jones Temple AME Zion Church (that you were ecstatic was happening) and hearing several guest pastors preach about not seeing color. To be clear, colorblindness is not the answer. To not see color is to not see me.

It’s high-ranking officials posting things on social media that negate disparate histories of different groups of people in this country.

It’s a huge Back the Blue event, while few folks gather to say my life, or more importantly the lives of my children, actually matter.

It’s being warned not to attend local Black Lives Matter event, because of the threat of violence, “and I want you and your kids to be safe.”

It’s reading the comments about the protests on Facebook and seeing so-called neighbors saying, “keep that in the city, the woods get scary at night,” and being terrified because you live in those woods.

These are but a handful of my experiences here, over the past four years (and I have lived in six different Southern communities for comparison). I realize gender also plays a role in how I experience Waynesville, and some of these interactions may have been different or avoided if I was a Black man. You might say, “well, if you don’t like it, just leave.” I think about that often. I pray about it often. I ask myself in bed at night, is my great job worth all these interactions that make me question who is my neighbor? So, before you write me off as some “Yankee” stirring up trouble, remember, I was under the guise that coming here was coming home. Those sub-zero temperatures were bone-chilling cold in Syracuse, but warmth here is bone-chilling too. It’s educative for my impressionable children.

My daughter, who is on the autism spectrum, has already articulated that she thinks it’s better to be white. My son, who is a social butterfly, cannot understand that people who love him right now — because he’s super skinny and little and the cutest thing ever — will be afraid of him when his voice drops and he shoots up a couple of feet.  And I wonder if I need to time my exit with his maturation.

What I am trying to accomplish with sharing my experience? I simply wanted to share with the locals what it is like for someone like me to be amongst you. Have we made friends here? Absolutely, people I will love with my whole heart until the day I die, but most of them do not understand the Waynesville I know is different than the Waynesville they know. I’m writing this so the good folks of Waynesville know that even in this beloved town, race matters. And Black lives matter in Waynesville, even if very few will say so. You may argue back as you’re reading that I’m oversensitive or I have a chip on my shoulder, and I would urge you instead of creating a rebuttal to my experience to simply read with the intent of understanding. While there are no crosses burning in my yard, don’t let that be the litmus test for you to feel my words are valid.

We don’t choose our neighbors, but we choose how we treat them. For far too long, Southern hospitality has been performative. We smile, we nod, we wave, and say, “Good morning,” while also using our lawn signs, bumper stickers, elongated stares, and Facebook pages to tell someone they don’t belong here. In the end, Jesus taught your neighbor was the one you didn’t expect. The Samaritan was a foreigner (outsider). But He also said, in Matthew (10th chapter,) when you go somewhere and you’re not welcome, shake the dust of your feet. I often wonder if my family will need to shake the dust when we leave this town.

Brandi Hinnant-Crawford is an Associate Professor of Educational Research at Western Carolina University.  She lives in Waynesville with her 8-year-old twins, Elizabeth Freedom and Elijah Justice, and her mother, Rose. Her children attend Haywood County Public Schools.