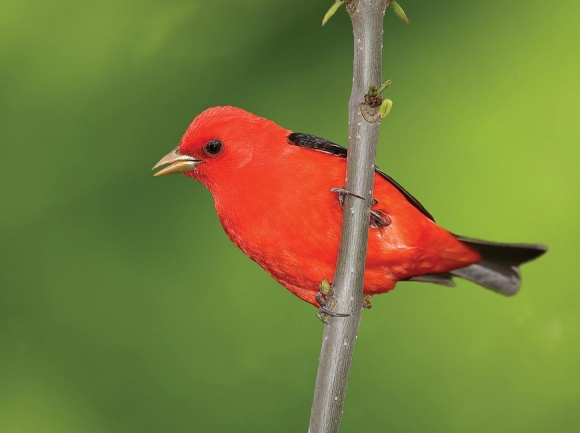 I almost never encounter the summer tanager (whose entire body is rosy red) in Western North Carolina, but the scarlet tanager is encountered every year — to a greater or lesser extent — during the breeding season (mid-April to mid-October) in mature woodlands (especially slopes with pine and oak) between 2,000 and 5,000 feet in elevation. The bird winters in northwestern South America, where it enjoys the company of various tropical tanagers that do not migrate.

Keep in mind that the female doesn’t resemble her mate except in shape. She is olive-green or yellow-orange in color. Also keep in mind there is a variant form (morph) of the male tanager that is orange rather than scarlet in color. I suspect this variant is the result of something peculiar in its diet. My first and only encounter with an orange scarlet tananger was in the Lake Junaluska area several years ago.

The call note used by both the male and female is a distinctive “chip-burr … chip-burr.” The male’s song is not pretty. He sounds like a robin with a sore throat; that is, the notes in the song are hoarse and raspy. When gathering nesting material, the female sometimes sings a shorter “whisper” song in response to the male’s louder song.

Males in adjacent territories often engage in combative counter-singing and will, as a last resort, go beak-to-beak. On our property, a creek sometimes serves as a boundary — the line drawn in the sand, as it were. The males sing defiantly at one another across the water and sometimes make forays into enemy territory. Meanwhile, the female is busy incubating her eggs. When not squabbling with a nearby male, her mate brings food.

Editor’s note: This article first appeared in a June 2012 edition of The Smoky Mountain News.