This must be the place: ‘Don’t let ‘em pick guitars and drive them old trucks’ 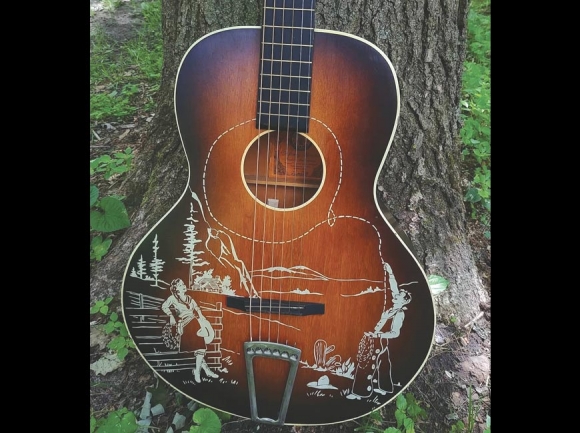 Sitting in the back den of my parents’ Upstate New York farmhouse last week, I could hear the familiar sounds of the big brown UPS truck and its squeaky brakes slowing down to full stop in front of the driveway.

Shooting up from the recliner, I darted outside and met the driver just as he emerged from the delivery vehicle. He handed me the big rectangular box and said farewell. Walking back to the farmhouse, I got a better grip on the large cardboard container, a big grin rolling across my face.

Placing the box on the kitchen table, I grabbed a sharp kitchen knife and meticulously opened the package. Remove all of the stuffed newspaper, bubble wrap and other scraps of paper. Feeling around, I felt the hard case and slid it out, finally revealing itself: a 1940s Rotary Deluxe cowboy parlor guitar.

Popping open the road case, the smell of old wood and dusty strings wafted through the kitchen. Holding the acoustic instrument, I marveled for several seconds over the intricate and well-preserved stencil art on the guitar, depicting a cowboy and cowgirl, with the cowboy lassoing the sound hole (which was symbolically the moon).

Purchased online from a guitar store in Iowa, I kept thinking of all the people, places and things the Rotary Deluxe had seen in its almost 80 years of travel and performance. Perhaps it wandered the Rocky Mountains or headed east at some point, only to circle back halfway to the cornfields of the Midwest. Heck, think of all of the guitar players who have picked it, all of those folks either long gone or still roaming this earth.

The journey to ownership of the Rotary Deluxe has been quite the whirlwind this year. Starting with a simple ukulele as a gift from my mother on my birthday in February, I became obsessed with the four-string instrument, finding all the time in the world to learn and play it throughout the coronavirus shutdown and shelter-in-place.

Though the ukulele and acoustic guitar are somewhat different in chord changes and approach, I knew the transition from one to the other would be more to my liking, seeing as I could take my confidence and skill set from the uke and apply it eventually to a six-string acoustic.

Thus, here I am some four months since my birthday, the proud owner of four ukuleles and two guitars (including a 1966 Silvertone acoustic). How wild, eh? My musician friends have informed me that I’ve caught what is known as “G.A.S.” (gear acquisition syndrome), where one can’t seem to stop browsing and buying additional instruments and accessories.

And I was thinking this morning about why I’m so attracted to these old acoustic guitars. Well, if you dive deep into my past, you’ll see exactly. I’ve always loved old houses, old cars, old brass beds, old barns, old chairs and old desks, etc.

That admiration and appreciation for those things comes from my parents, of which I grew up in an 1820 limestone farmhouse, an early 1970s MGB sports car parked in the old barn, weekend trips with my family always spent chasing historical sites (and quaint New England towns), and always embracing the beauty of antiques and the stories these items and places tell if you just take the time to truly listen.

But, most of all, I love old folks, people whose minds I can pick about their personal experiences and what their long journey along the road of life has been, ultimately the wisdom radiated and bestowed in their presence. Truth be told, there really ain’t anything much better in the grand scheme of things than a cup of coffee spent with a wise and vivacious older person with endless tales to spin.

Anyhow, back to the Rotary Deluxe. Though it’s only been a week or so since it came into my possession, I can’t seem to put it down (just like the uke). I find myself constantly walking by the hard case, only to stop and pull it out to strum a few chords rhythmically and continuously.

Even though my mind often thinks of where this guitar has been, I also ponder where it will go from here? My thoughts meander around to open mic nights in neighborhood dive bars and breweries, campfire jam sessions way out in the mountains of Western North Carolina and greater Southern Appalachia, maybe even back out west to the high desert plains once felt first-hand, now only seen and imagined in twilight dreams quickly fleeting.

Regardless, this new, creative lease on life through these instruments has been quite surreal, to say the least. It has been years since I’ve actually played music. And I didn’t realize until lately (with instrument in hand) how much of a void they’ve filled in my heart and soul.

And to any of you reading this who might be toying with the idea of finally picking up an instrument, I have only one thing to say: do it. What are you waiting for? Just do it. Who cares if the initial sounds from your hands are reminiscent of nails on a chalkboard?

I mean, I bet you weren’t the best driver in the world that first day you got your license or, perhaps, good at your job that first day in the office (none of us were). But, you learned and kept going, only to evolve and master whatever process or position you found yourself in. Pick up the instrument. Immerse. Enjoy.