This must be the place: Like the morning sun you come and like the wind you go 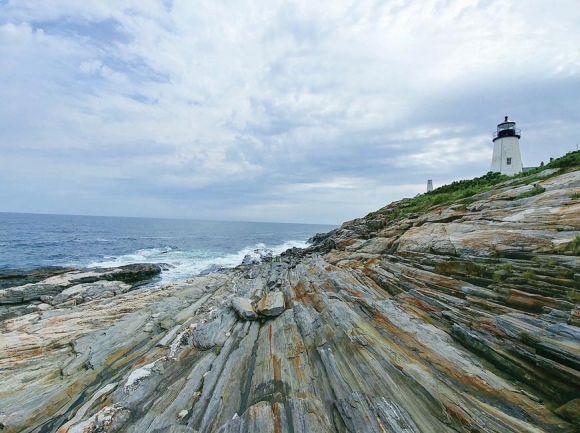 Somewhere between finishing my column last Tuesday morning and lunchtime, it was decided by my mother that she and I would head to the coast of Maine for a few days.

With my niece’s sixth birthday party on Saturday afternoon, and seeing that I was still hanging around my native Upstate New York, there was a short window for an escape to our favorite place: the small, serene cove community of New Harbor.

Jumping into her Toyota Rav4, we left Plattsburgh, New York, and hopped on the ferry over the majestic Lake Champlain to Vermont. From there it was Interstate 89 through the Green Mountain State, past Burlington and the state capital, Montpelier, all the while in the shadow of these ancient peaks of my youth.

It had been a while since my mother and I had time to just be by ourselves and chat. In her words, she and I “are cut from the same cloth.” Just a couple of free spirits who enjoy each other’s company.

Back in the day, when I left for college some 300 miles away from home, we’d take a trip once a year to somewhere, anywhere, just to spend time catching up: Seattle, Oregon, New Orleans, Hawaii, etc.

Crossing over the Connecticut River into New Hampshire, the sun was falling behind the hills. Pulling into Lebanon, we were able to find an Italian restaurant, Three Tomatoes, that was not only open, but also seating folks outside on the side street.

Each ordering (what we thought was) a personal pan wood-fired pizza, we were shocked when these enormous pies showed up and overtook the table. Though incredibly delicious, the majority of the pizzas were enjoyed as leftovers for the rest of the Maine trip.

Pushing through New Hampshire towards the Maine state line, my mother started reflecting about her best friend, Karen, who was a professor at nearby Dartmouth College in Hanover. When I was a kid, Karen passed away after a tragic accident involving her medical research on campus.

Although my mother would mention Karen from time-to-time, we never really delved into their friendship, at least not on an intrinsic level. But, seeing as there was still three hours of driving left to our destination, I started throwing out some questions about how they met as kids, what about Karen really drew my mother to her, and how their friendship blossomed over the decades.

For the next hour or so, I just let my mom talk, almost as if nobody had really ever asked her, at least in recent years, about how she was doing in regards to her late bestie. So many stories over so many years. One story that really stuck out was when they were in college in the mid-1960s and my mother had laryngitis.

Without being able to speak, the two of them headed to a bar in my hometown for some drinks and dancing. My mother would write notes on a piece of paper to Karen to communicate what she needed or wanted from the bar.
And even though Karen could talk and my mother could obviously hear, Karen wrote notes back, just so my mother wouldn’t feel left out being unable to talk. “She was just that kind of friend. She’d do anything to make sure you were okay,” my mother chuckled in a somber tone.

The next morning, sitting on a front porch in Maine, we sat with our friends from Boston (whose summer home we stayed at) and talked over coffee. It was a whirlwind of exchanges about our respective lives during the pandemic and how we’re doing (honestly feeling) during “all of this.”

Later that day, we headed down the road to Damariscotta for lunch. The only place really open was King Eider’s Pub, a spot I’ve been frequenting pretty much every summer since I was in high school.

Fond memories of conversations in those pub booths about where I might go to college and what I might want to do with my life, all circling back to the here and now of where I stand and who stands alongside me at this juncture.
Right before we headed back to New York, I stumbled across a small cabin for sale near our friend’s summer home. It’s always been a pie-in-the-sky dream of mine to own a cabin on the coast of Maine, a sentiment that’s been tucked in the back of my mind since I was old enough to drive and the only place I wanted to venture to was New Harbor, Maine.

The morning of our departure, my mom and I met with the local real estate agent and toured the property: a small two-story cabin with loft bedroom on 1.2 acres with private beach access. Compostable toilet with option for outdoor shower.

What more could a writer who’s a minimalist want, eh? Standing in the backyard, I could already picture and savor the memories that could someday be made here: happily and with gusto.

And just as we left the cabin to motor to New York, my mom wanted to drive by the nearby lighthouse. So, instead of going left and entering seven hours of our impending trek, we took a right and aimed for the end of Pemaquid Point.

On the edge of the shoreline, with waves crashing onto the massive rocks, we parked and gazed over at the lighthouse. It was as beautiful as I remembered, and as my mother remembered, too. Though I’ve been coming to that spot since I was a toddler in 1985, she has returned each summer since 1972.

“You know, seeing this never gets old,” I said to my mom. She turned to me and replied, “It doesn’t. It really doesn’t.” I then leaned over and hugged her. Back into the car. Back to New York. But, with more new memories in our back pockets.