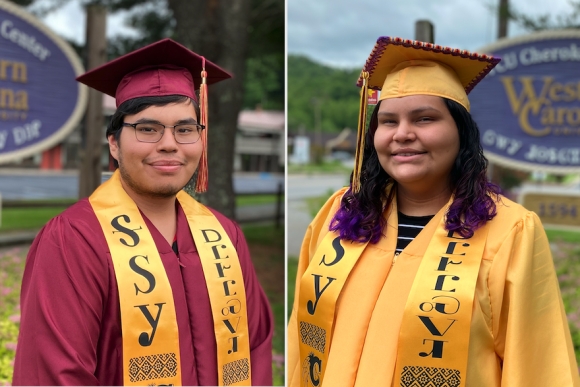 By Aaliyah Swimmer
WCU Cherokee Center intern
Western Carolina University's Cherokee Center recently selected Class of 2020 Cherokee High School graduates Tierney Bradley and Brandon Wolfe to receive the Dr. Jerry Wolfe "Gadugi" Award as part of its efforts to connect with the community.
The award is bestowed on students who present a selfless character and true integrity within their communities, as embodied by Jeremiah “Jerry” Wolfe, an elder of the Eastern Band of Cherokee Indians. "Gadugi" roughly translates into English as "coming together for common good."
In 2013, Wolfe was named the first “Beloved Man” of the Eastern Band of Cherokee Indians in more than 200 years. He received an honorary doctorate of humane letters from WCU in 2017 and was passionate in his hope that Cherokee children learn the Cherokee language and the traditions and customs of the tribe. A World War II combat veteran and D-Day survivor, he passed away March 12, 2018, at the age of 93.
Bradley is an enrolled member of the Eastern Band of Cherokee Indians and resides in the Bird Town community with her parents, Kristine and Eddie Bradley. When asked about how she felt receiving the award, she said, "I felt blessed to receive the award. I also felt touched that I am dependable enough for the people around me to receive such an award."
Bradley credits her grandmother, Nancy, as being the elder who has personally had the most influence on her life. "She always taught me to be a strong independent woman, and she taught me to be strong in my beliefs," Bradley said.
Completing school is a challenging but rewarding task, Bradley said. She had this to say to the young school children of Cherokee: "Don't let anyone hold you back and don't let anyone tell you that you cannot do something." She plans to attend Carson-Newman University in the fall, where she will major in human services. "I chose Carson-Newman based on the environment. I felt like I could be myself there and strive to be the best I can be."
Wolfe also is an enrolled member of the Eastern Band of Cherokee Indians and resides in the Paint Town community with his parents, Martha and Wayne Wolfe. “There are no words to describe it, I am truly honored and blessed to receive this award, and I hope I can set a good example for the future generations as Dr. Wolfe did," he said.
Wolfe credits his maternal grandfather, Jonah Reed, as well as both his paternal and maternal grandmothers with being tremendous influences on his life. “They helped me with keeping the language alive and they taught me basketmaking and carving to keep the traditions going," Wolfe said. His advice for young Cherokee students is: "Do not give up just because something is hard. That's why we learn, because what was hard before becomes easy in the end. Don’t be afraid to ask for help."
Wolfe plans to attend Tusculum University on a bowling scholarship. "It is a way to represent us when I am away from home," he said.
For more information on the Dr. Jerry Wolfe "Gadugi" Award, contact WCU's Cherokee Center, at 828.497.7920.
Established in 1975 as an office for outreach and partnership development, the Cherokee Center is committed to serving tribal and non-tribal residents of Qualla Boundary and the surrounding communities by improving educational opportunities.
Tags:
Share: