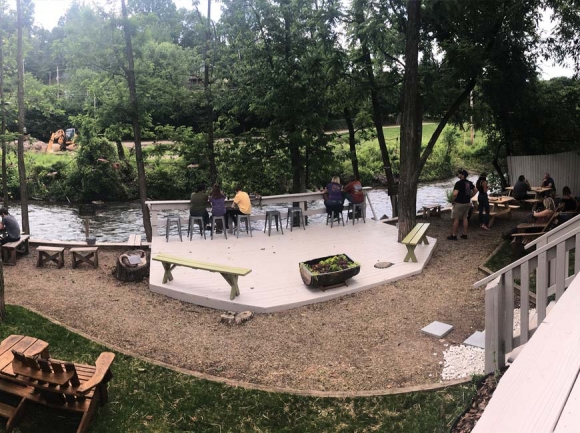 In a highly-anticipated relaunch of a beloved Waynesville business, Frog Level Brewing has finally opened its doors following renovations and relaxed government mandates in the era of the coronavirus.

“It’s been so nice to see people come in and see what we’ve changed and what we’ve kept the same, [in terms of] the charm of the brewery,” said Morgan Crisp.

Alongside her husband, Travis Crisp, Morgan and her business partners took on Frog Level Brewing in an effort to not only expand the initial brand, but also push ahead with plans for its other brewing line, 7 Clans. Before this recent property purchase, 7 Clans was contract brewed and canned at BearWaters Brewing in Canton.

“We’re still keeping the Frog Level brand, and we’ll be rebranding that beer line with potential distribution opportunities we’re looking into,” Morgan said. “The taproom will still be called Frog Level Brewing, with the only real difference now being that the 7 Clans beer line will also be brewed at Frog Level.”

A signature feature of Frog Level Brewing, the Richland Creek patio and concert stage area has been repainted and revitalized. As well, the restaurant component within the brewery will still be intact, but with more shareable foods rather than full meal offerings.

Now up and running, this fresh chapter for Frog Level and 7 Clans Brewing has been a long time coming for the new owners. But, with patience being a virtue, the future of this company is now in good hands.

“We’ve made really small steps and we probably haven’t made the conventional steps that everybody else thinks we should make,” Morgan said. “But, it’s been small steps for both brewery brands, and that works for us and works for our budget. We’ve got a lot of bases covered and we work well together in this business — we’re looking forward to seeing how this place evolves.”