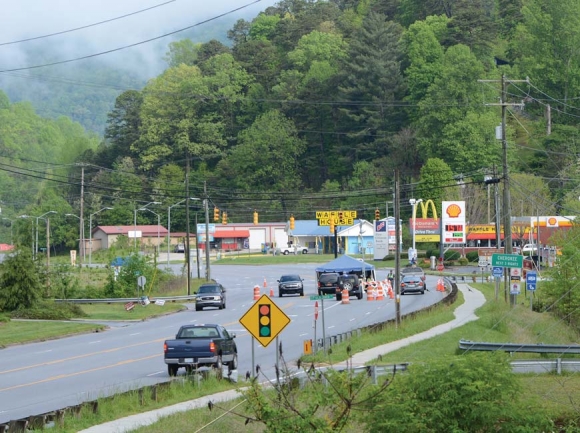 Cars stop at the police checkpoints located at the U.S. 441 entrance to the Qualla Boundary. Checkpoints are no longer in effect as of 10 p.m. May 8. Holly Kays photo

The decision coincides with the Principal Chief Richard Sneed’s May 5 announcement that checkpoints that had been limiting access to the Qualla Boundary since March 21 would be lifted beginning at 10 p.m. Friday, May 8, along with a curfew that had been in effect from 10 p.m. to 5 a.m. The Great Smoky Mountains National Park and the Blue Ridge Parkway also lifted closures near Cherokee last weekend.

“We’ve got to reopen the economy,” he said in a May 5 video explaining the decision. “We can’t stay closed indefinitely.”

Relieving officers of their duty to monitor the three checkpoints in question around the clock will also free up the police department to better attend to other matters, said Sneed.

“We also need them to be focusing on the drug epidemic and the overdoses we’re having and the fatalities from that,” said Sneed. “We really need them to get back to what their mission is.”

However, a checkpoint has been set up at the entrance to the retail plaza where Food Lion is located to ensure that only locals visit the grocery store and nearby establishments.

In the casinos, areas where social distancing can be practiced will be the first to welcome guests during this phased reopening. These include the gaming floor, hotel and some restaurants, with occupancy limited to 30 percent. Spa, valet, poker, buffet and concert offerings will remain closed at this time.

To make social distancing possible, casino and hotel access will be by invitation only at first, with small groups of customers receiving email invitations as early as May 13, according to a press release from Harrah’s. The number of invitations may increase over time as it becomes appropriate to do so. Members of the EBCI will also be able to access both casinos during this time.

Furloughed employees will begin returning to work as their respective work areas ramp up operation. While employees continued to receive pay during the initial month of closure, most employees have been on furlough since April 16. Before beginning work, each employee will complete a screening, which will include a questionnaire and temperature check, with facemasks required while on duty.

“This is uncharted territory for the casino industry, but what is clear is that when we return to work it will not be exactly as it was prior to closing,” said Senior Vice President and General Manager Brooks Robinson. “We look forward to welcoming back our guests and team members, also understanding that social distancing is going to be a part of our business and lives for a while.”

The casino has hired an infectious disease control team to offer advice for new safety and hygiene protocols, Sneed said during a May 8 video update.

“I’m really impressed,” Public Health and Human Services Director Vickie Bradley said in the video. “They have dotted every ‘i’ and crossed every ‘t’ to do all that they can to ensure that customers and workers are safe.”

The tribe is also planning a gradual reopening of the economy and government services. In Executive Order No. 12, issued May 7, Sneed said that retail establishments, hotels and campgrounds would be permitted to open at 50 percent capacity on May 15, provided that they follow strict cleaning and social distancing procedures. While in public, people will be required to wear cloth face coverings.

While Sneed had initially considered May 18 as a reopening date for tribal operations, federal CARES Act funding arrived and made it financially feasible to push that date off a bit. Tribal offices now plan to reopen on Monday, June 8. Until that time, inactive employees will continue to receive pay based on 68 hours per two-week pay period, and they will be able to record hours worked or use accrued leave to make up the 12-hour shortfall.

Tribal government is also working with the Cherokee Boys Club, Cherokee Central Schools and the Cherokee Indian Hospital to use the federal money to benefit those employees as well, said Sneed.

“As always, our concern locally is for our tribal elders and those with compromised immune systems and those with underlying health conditions,” he said in the May 8 video.

In response to that concern, Sneed said, he has directed Emergency Management Services to develop a plan for doing shopping and grocery delivery for elderly and immunocompromised residents.

Sneed said that it’s time to begin a gradual reopening of tribal lands and businesses, because Cherokee has successfully flattened the curve and prevented the initial appearance of COVID-19 from overwhelming its hospitals. So far, testing has turned up nine positives and 15 presumptive positives among community members, but none of those cases have required hospitalization.

Those low numbers come despite the fact that Cherokee has done more testing per capita than anybody in the state, said Bradley, with about 1 percent of total tests coming back positive. While that data shows Cherokee as meeting the criteria to start reopening, testing and contract tracing will likely only increase over the coming months, she said.

“This is going to be ongoing. This doesn’t stop in June, July or August,” said Bradley. “This is our new norm.”