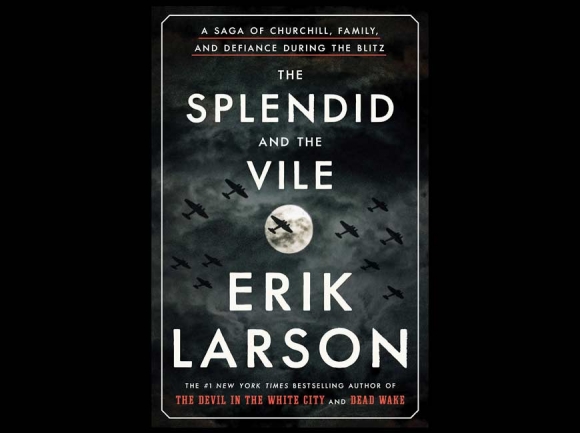 When my friend Anne praised this book and suggested I read it, I was reluctant, for I have over the years gone through several biographies of Churchill, with my favorite being The Last Lion, a trilogy by William Manchester completed by Paul Reid after Manchester’s death. Most recently, I dove into Boris Johnson’s The Churchill Factor, more to learn about Johnson, now the British prime minister, than about his predecessor in that office.

Would yet another book about Churchill be worth my time?

Two thumbs up is the answer to that question.

The Splendid And The Vile stands apart from other Churchill biographies for several reasons.

First and foremost of these is its immediacy and vitality. Larson has a wonderful knack for bringing alive the men and women, British, German and American, involved in this struggle to the death. When he describes the night bombings of the Luftwaffe, we feel we are standing alongside the firefighters battling the flames or are seated in one of the many shelters in the city, with the walls reverberating from explosions. The dust from these bombings covered much of London; author Graham Greene wrote of “the purgatorial throng of men and women in dusty torn pajamas with little blood splashes standing in doorways.” Sometimes these details are horrifying — at one point a stray dog runs down the street with a child’s arm in its mouth — but more often we are struck by the bravery of so many people, including Churchill himself.

Here, too, were many details about the Churchill family unfamiliar to me. Mary, the Churchill’s 18-year-old daughter, falls in love for the first time, nearly marries, and then breaks the engagement. Addicted to drink and gambling, and always in debt, Churchill’s son Randolph ignores his responsibilities to his young wife Pamela and their infant son; Pamela leaves him and has an affair with American ambassador Averell Harriman, whom she will marry 30 years later.

We meet the talented but temperamental Lord Beaverbrook, whose energy and verve kept alive the ability to produce aircraft even in the worst of the Blitz; through his diaries we listen in on John Colville as he tries to woo a woman who doesn’t love him; we learn of the cruelty of the cold-hearted Joseph Goebbels through his diaries as well.

Finally, of course, there is Churchill himself. Though familiar with many of the Larson’s anecdotes about the prime minister, The Splendid And The Vile made me realize once again that were it not for Churchill, Britain may well have surrendered to the Nazis. The “Great Man” theory of history is often pronounced dead, but in Churchill’s case we must make an exception. His audacity, his energy, and his example kept alive the country he so loved.

Here is just one small example of his spirit. Churchill was talking to some of his family and told them they must resist the Germans if they invade England.

“If the Germans come, each one of you can take a dead German with you.”

“I don’t know how to fire a gun,” protested daughter-in-law Pamela.

“You could go into the kitchen and get a carving knife.”

She had no doubt that he meant it.

We also find in Churchill a leader whose eccentricities endeared him to his people while alternately baffling and amusing his inner circle. When visiting the White House for the first time, a naked Churchill fresh out of his bath hears a knock at his door, orders it opened, and finds President Roosevelt in the hallway in a wheelchair. Churchill invites him in, saying “As you can see, I have nothing to hide,” and then strolls naked about the room discussing events with the president. Like some of us, including me, Churchill was also a self-described “blubberer,” shedding tears during movies or openly weeping while visiting the bombed-out sections of London and other cities.

In addition to painting in details these many portraits, Larson has one other great skill as a writer. He ends most of his chapters leaving the reader hanging and wanting more. This use of suspense helps drive the book.

Reading The Splendid And The Vile during the coronavirus epidemic, with its closure of so many schools, churches and businesses, its stay-at-home orders and its pandemic of fear, prompted me to compare the spirit of Britain during those dark and terrible days to our own present emergency. Whatever we may believe about the lockdown — Is it effective? Is it making the epidemic worse? Will our small businesses, those of them that survive, recover? — our mainstream media often seem more intent on spreading panic than offering hope. The consequences have been dire: We have seen businesses fail, phone calls to suicide help centers skyrocket, and have lost — temporarily, we must hope — many of our First Amendment rights.

In the middle of the Blitz, women like Pamela and Mary were going to dances and restaurants, people picnicked in the parks, banks stayed open, and workers showed up at their jobs.

Let’s turn our eyes to that rearview mirror one more time and look back at the late 1960s. The Vietnam War was raging, there were protests, political rallies and conventions were in full swing, and 1969 was the year of Woodstock. Meanwhile, the Hong Kong Flu was sweeping through the country, eventually killing around 100,000 Americans, most of them over the age of 65, at a time when the United States  had more than 100 million fewer people than it does today. Despite this epidemic, schools, churches, and businesses remained open. In 1969 we landed a man on the moon, an event I watched in an auditorium packed with 1,200 other cadets.