The cross situated over Lake Junaluska has been lit at night for years to give railroad workers some guiding light and inspiration as they rolled through Haywood County.

At the suggestion of the community, the cross has been lit up around the clock since early March to give light and inspiration to everyone during this uncertain time.

“For 107 years, Lake Junaluska has been this beacon of hope and a place of enduring light and that’s been one focus we’ve had since the beginning of this to focus on our mission — to be a place of Christian hospitality where lives are transformed,” said Ken Howle, executive director of Lake Junaluska Assembly. “We made an effort in March to turn the cross lights on 24/7 because the world needs that enduring light and hope that comes from faith and that focus has permeated into everything we’ve done as an organization.”

As many treasured places have had to shut their doors completely during the COVID-19 Pandemic, the staff at Lake Junaluska has been working hard to meet federal, state and local State of Emergency restrictions while still trying to meet its mission. The conference center operations began shutting down March 16.

“Because we’re a group-oriented tourist destination, we felt this weeks before many local businesses started to feel the impact. We saw $100,000 worth of cancellations in just one day, so that’s significant right off the bat,” Howle said. “We started making adjustments in late February because we saw what was coming. We came up with a five-step approach around safety and sanitation. The safety of our guests, staff and community have always been our focus. We’re thankful at this time the only impact has been economic.”

The total impact of COVID-19 has yet to be seen and will be difficult to determine moving forward, but Howle said the lake anticipates a $3 million to $4 million loss in 2020. With an annual budget of about $9 million, that’s a significant setback.

Now that the lake has dealt with what it feels like is the initial impact, staff can begin planning for the next 12 to 16 months, which will include adapting to new operational guidelines and procedures. Howle outlined a three-step approach for staff — sweeping changes to minimize chances of exposure to the virus, adapting the organization to provide new services that still align with the mission, and to create confidence for guests by allowing for greater flexibility when booking lodging at the lake.

The one thing most people in Haywood County have probably noticed is changes to the walking trail at Lake Junaluska. The lake implemented a one-way route on the trail and put out signs reminding people to maintain six feet between each other. Since the governor’s order stated that outdoor recreation was still considered essential, Howle said the community felt it was important to keep the trail open to the public. However, due to the governor’s restrictions, the public bathrooms near the pool have to remain locked.

“Closing it without a mandate from local or state officials was also impractical. There are over 20 entrances to Lake Junaluska and we are very different from a state park where there is one entrance and a gate that can be closed,” Howle said.

The Lake Junaluska Golf Course remains open as well while having to adhere to social distancing protocols.

“The manager, Fred Edwards, he’s a poster child for innovative ways of adjusting operations in safe ways. He immediately went to look at the PGA guidelines and adjusted from day one. People appreciate that they can still get out on the course,” Howle said. 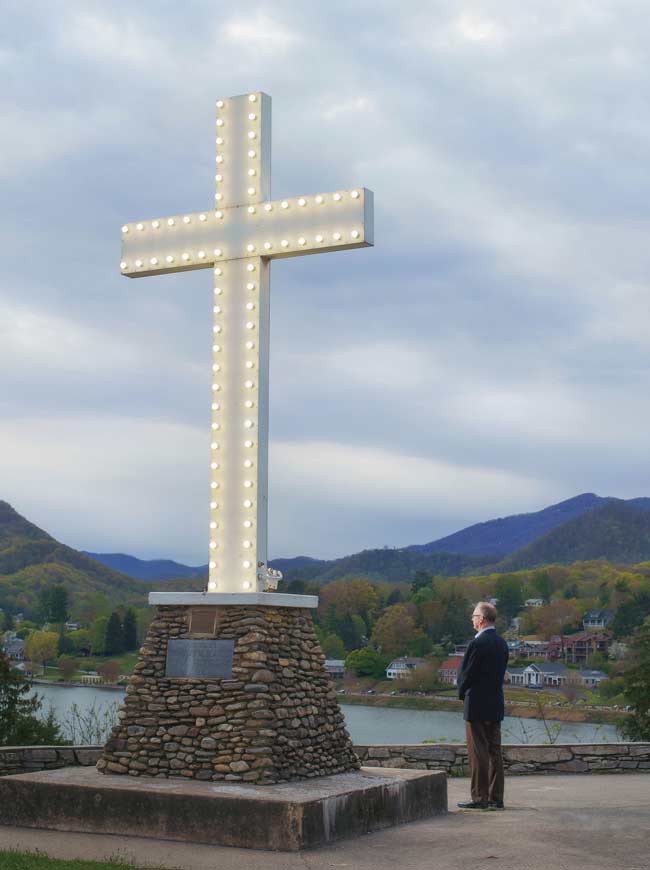 The lake’s annual plant sale would also continue, but with some adjustments. People placed their orders online or by phone and staff was prepared to deliver those orders to cars as they pulled up to the greenhouse. Howle said he was pleasantly surprised to find out the number of orders doubled this year compared to previous years.

“This pandemic will bring about a wholesale change in everything we do. For us innovation starts with looking at our mission to be a place of Christian hospitality where lives are transformed through renewal of soul, mind and body,’” he said. “In the past, mission fulfillment meant bringing people together for experiences at Lake Junaluska, today this will look different but the same concepts of hospitality, transformation and renewal are still key focal points. Even during a time of social distancing we can still live into our mission.”

When the CDC began recommending that older adults and those with chronic medical conditions stay home and avoid public contact, the lake wanted to assist the community, which contains a large number of residents in that age bracket. Howle said they developed plans for curbside meal service from The Terrace dining room.

“Our hope was that this would help to reduce the time our community needed to spend in grocery stores or other public areas. We’ve served over 1,300 meals to the community,” he said. “We are also planning to change our food service operation to move away from buffets. Picnics and outdoor dining will also be very popular this year. We are working on plans to expand both of these offerings.”

Knowing the pandemic has created a hardship for everyone, Howle said the lake has been extremely grateful for the outpouring of support received in the last six weeks. Staff immediately began communicating the lake’s needs to its extensive database of supporters to let them know a donation to the Annual Fund was the best way to support the organization during the pandemic. Loyal donors have responded in force by making their Annual Fund donations earlier in the year, giving more than they’ve done before and not restricting their donations to certain projects. The lake has also seen many new donors giving through the website and even the donation box along the walking trail close to the pool has been much fuller than previous years.

“We have past donors giving but we also have a huge number of new donors,” he said. “We usually get about $400,000 a year in the Annual Fund but now it’s coming in earlier than it usually would. The donation box at the pool has seen a lot of dollar bills and even $20 bills — people get it,” said Howle.

Those donations will come in handy to keep the walking trail and other facilities maintained for the next year. Lake Junaluska is private property, but for the last 60 years the organization has kept the property open to the public. Trail maintenance is dependent on charitable donations.

Gifts may be made online at ​www.lakejunaluska.com/support​. Choose “Lake, Grounds, & Recreation” in the donation dropdown menu to make a gift in support of the Walking Trail. Donors who make a gift of $500 or more to the lake, grounds, and recreation are recognized as members of the Friends of the Lake Circle.

“This is not the first time that Lake Junaluska has faced challenges. Over the past 107 years, we have continued to be a place of enduring light and hope during two world wars, the 1918 Spanish flu pandemic, the Great Depression, bankruptcy (in the 1930s), 9/11 and the 2008 economic downturn. We will overcome whatever challenges are ahead of us, and we will be stronger in the future,” Howle said.