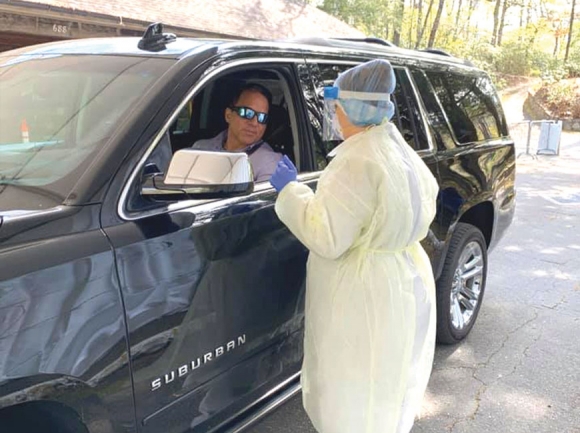 Principal Chief Richard Sneed receives a test for COVID-19 on April 15. The Eastern Band of Cherokee Indians encourages those with and without symptoms to get tested. Cherokee Indian Hospital photo

Continued testing by the Eastern Band of Cherokee Indians has resulted in confirmed cases of COVID-19 in Swain and Graham counties, the tribe’s Public Health and Human Services Department announced this weekend. These results mark the first positive cases in either county.

All four positive cases are now isolated at their homes, and PHHS is working with other health and emergency officials to identify close contacts.

Unlike other jurisdictions, the EBCI is testing community members for COVID-19 regardless of whether they are displaying symptoms. The tribe is asking that one person per household receive the test, offered in a drive-thru format.

Drive-thru testing began on Thursday, April 2. It’s open to all enrolled members, residents of tribal land and essential employees who have access to the Qualla Boundary. Outsiders’ access to tribal land is restricted during the pandemic.

This type of testing has yielded results, with the majority of the 10 people who tested positive or presumptive positive not displaying symptoms at the time of testing. Between March 1 and April 26, the tribe tested 957 people for COVID-19. That number has increased sharply over the last two weeks — as of April 13, only 238 people had been tested.

Of the 957, six tested positive and four are considered presumptive positives because, while lab data was inconclusive the health provider’s assessment led them to treat the patient as a positive. Negative results came back for 863 of those tested, and 83 await results.