WNCW and BPR make the connection during isolation 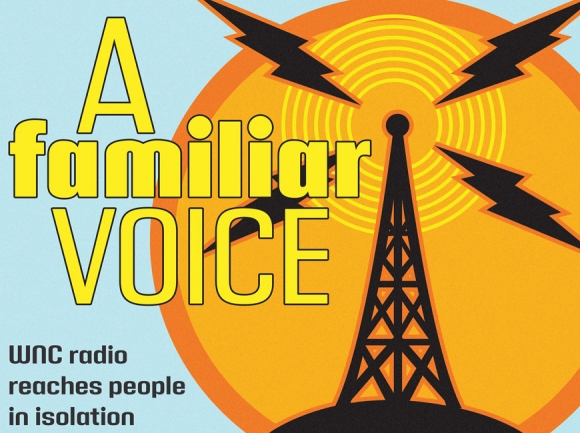 Walking down the empty hallways of the WNCW studios on the campus of Isothermal Community College in Spindale, Martin Anderson passes by silent offices on his way to broadcast in front of a microphone for all of Western North Carolina to hear.

“With the coronavirus, we’re monitoring the situation closely. Right now, we’re down to maybe a third of the staff that’s normally here,” said Anderson, the music director and a long-time popular host at WNCW. “We have longer shifts on-air, with some of us pre-recording our programs at home. We wipe down all of our shared equipment, with finding enough bleach wipes becoming a real predicament.”

Though WNCW has a fiercely loyal audience, its programs have pushed even more into the forefront of our daily lives in recent weeks. Amid the current coronavirus pandemic and state-mandated shelter-in-place orders, most folks are finding themselves sitting and waiting until normalcy might return, usually with the radio turned on.

“There definitely is more active listening from our folks. We’re certainly noticing that from our listener feedback and from the significant increase in our web streams and online traffic,” Anderson said. “Folks are telling us that not only do they have more time on their hands, but they’re lonely, too. They need companions, and it breaks my heart to think of so many people home alone and feeling the loneliness.”

Those sentiments are also held by Cass Herrington. A news reporter and host of “Morning Edition” for Blue Ridge Public Radio (BPR) in downtown Asheville, Herrington can’t help but think of all of those faces listening from the other end of her broadcasts. 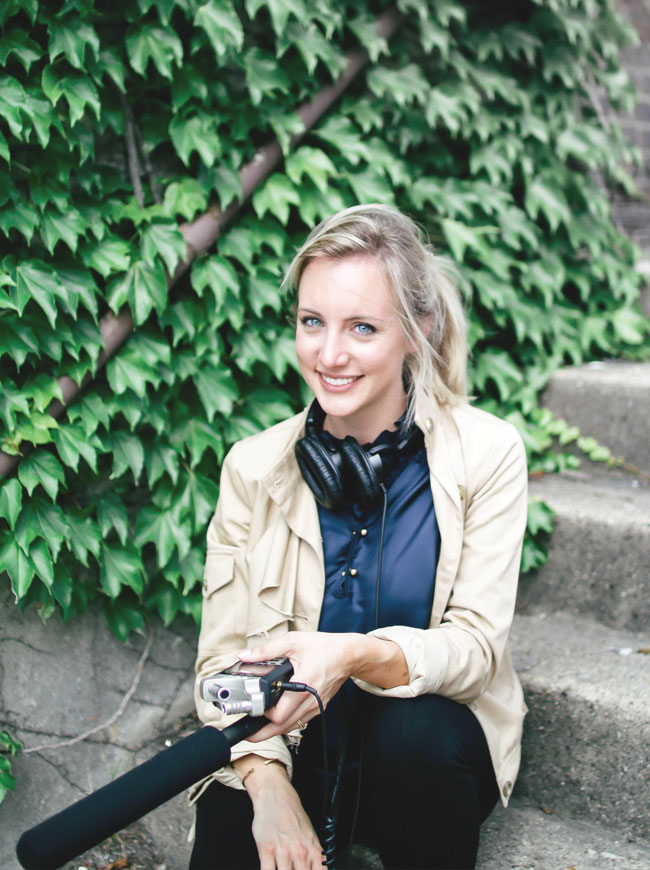 “It’s this urge to almost reach out and hold people’s hands through the microphone because there is so much anxiety, and on so many levels,” Herrington said. “It’s hard to be in a studio and not see the people who are listening — however the ability to convey that comfort [in our programming] is fundamental.”

Herrington points to other beloved National Public Radio (NPR) hosts as touchstones of familiarity and stability during times and moments of crisis.

“I think about Sept. 11 or the Boston Marathon bombing, where I was so close to my radio because there were [NPR] voices like Melissa Block or Robert Siegel — it was soothing,” Herrington said. “There’s something so personal about the human voice. And when you have these familiar [radio] voices, it’s comforting during scary times to know those voices are still there, still maintaining some sort of normalcy or routine.”

For Anderson, it’s about being keenly aware of what song to play or mood to set the tone for someone’s day or night — those melodies at the heart of our closely held memories with loved ones, either near or far during this quarantine period.

“Some of our hosts are focusing on playing some feel-good music to allow for people to find a sense of normalcy,” Anderson said. “But, for me, I’m really trying to play songs that reflect what’s on people’s minds. And it’s been nice when we hear acknowledgement of that from our listeners, that the music is helping them.”

Anderson noted the recent death (due to complications from coronavirus) of iconic singer-songwriter John Prine as a prime example of the importance of WNCW and its programming.

“With John’s passing, normally people would gather and do a tribute concert or go to a bar, have a beer and talk about his music with their friends,” Anderson said. “But, with everyone not about to do that right now, the only real outlet folks have is WNCW to mourn the loss of one of their favorite musicians as we play his music all day in remembrance.”

And with the coronavirus pandemic, another issue has emerged — a lack of available information for the Hispanic population and communities within Western North Carolina.

To mitigate this, Herrington, who is fluent in Spanish and has an extensive background in reporting on race and immigration topics, launched “BPR En Español,” which provides online news and story content in Spanish for its audience.

“The loudest response I’ve gotten in these past few weeks has been from my sources in the immigrant and Latinx community,” Herrington said. “They’re concerned and alarmed that there is not enough information — whether that’s news or a public service — in Spanish. With this new platform at BPR, we’re hoping to expand it as we go along.”

Both WNCW and BPR have programming budgets that rely on live fundraisers. With listener support keeping the lights on, each station find itself at a financial crossroads where the future remains unknown. 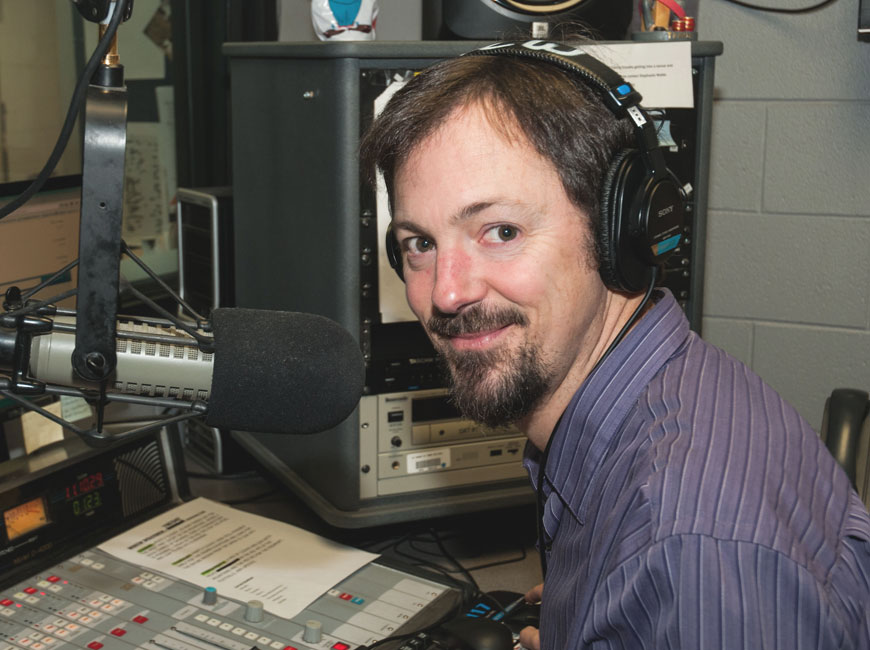 Martin Anderson, music director and host at WNCW in Spindale.

“We get by on a pretty limited budget that has to be replenished every six months with our fund drives, and then on a regular basis with our local businesses that support us. But, with the economy the way it is right now, you just never know what’s going to happen,” Anderson said. “We’ve had to postpone our latest fund drive, which also involves a lot of volunteers. Even though we have more people relying on us, we still need to make sure we can stay in the black — we’re not sure who we can expect to support us during this crisis.”

“There’s been a lot of innovation going on not just in the BPR newsroom, but also in the business department. With the pandemic, we started immediately reaching out to businesses that support us and made sure that they were doing OK,” Herrington added. “But, it’s hard to ask for money in this time where everybody is freaking out about what the future will look like. And our fundraising team has had to think about how we can raise money in a delicate way that’s not insulting to people.”

Another side effect of the downward national economy has been the livelihoods of professional musicians. With live concerts and festivals canceled until further notice, performers are now stuck at home without an income.

Though many musicians have turned to live online streaming on Facebook and Instagram (and donations via PayPal or Venmo), WNCW is also making a focused effort to showcase the talented artists and acts from around Western North Carolina and greater Southern Appalachia.

“We here at the radio station are really hammering home to our listeners that we have to watch out for these artists because their whole income has dried up,” Anderson said. “I applaud the musicians that have come out right away with the live streams and also teaching online workshops to make ends meet. But, it’s not enough I’m afraid, though I’m hoping it’ll be enough to help as many artists as possible from having to give up their careers.”

And yet, for Anderson and the rest of the WNCW staff, it’s been a surreal experience to be able to continue to provide its steadfast platform of music and news, something not lost on the hosts who radiate a sense of camaraderie and comfort during uncertain times.

“Radio is this medium that’s kind of designed for these types of societal situations, where we’re able to connect people and information during this pandemic isolation,” Anderson said. “It means a lot to be able to keep people company and keep them from going stir-crazy. And it’s been really gratifying to hear from our listeners who appreciate what we’re doing — this renewed awareness of the importance of radio in our lives.”

For Herrington, the responsibility and importance of radio during this health crisis has conjured memories of her time studying and taking radio production classes in Argentina.

“On the first day, the professor was talking about living in the Dirty War in the 1980s, and how radio was the lifeline for people who were quarantined and not allowed to go out on the streets,” Herrington said. “The radio connected people. Even during government censorship, people could catch radio signals and find out what was going on in their own country. So, this crisis right now hearkens back to the fact we’re all seeking connection and we all want to be on the same page — radio serves that purpose.”