From Wuhan to Western North Carolina: A Coronavirus Pandemic timeline 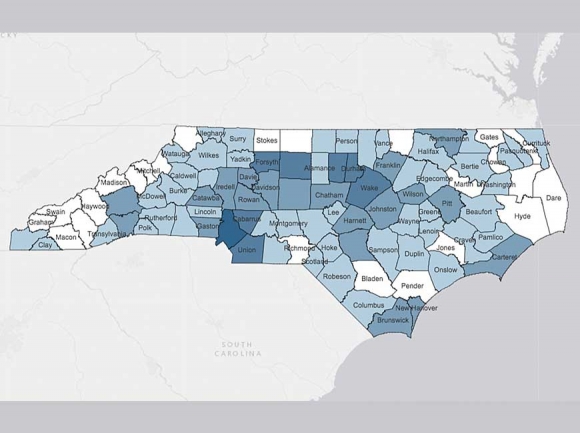 Darker counties represent more coronavirus cases. Counties in white have no reported cases. Data is as of 2 p.m. on March 31, 2020. NCDHHS map

When the first rumors of a strange new contagious pneumonia-like illness began circulating in China late last fall, few could have imagined that the coronavirus outbreak would grow to become the global pandemic that it is today.

The illness garnered little attention in the United States through January and even much of February, but the pace of its acceleration through March has left many wondering how, exactly, it progressed from Wuhan to Waynesville to Webster and throughout all of Western North Carolina in less than three months.

Almost every newsgathering organization in the world is now reporting on the economic and social disruption caused by the coronavirus, above and beyond the 30,000 deaths associated with it.

Integrating that reporting — global, national, regional, local — into one authoritative, comprehensive sequence shows how far we’ve come, even as we wonder how much further we have to go.

• Early December 2019: What are now thought to be some of the first known cases of COVID19 appear China. Some are connected to the Huanan Seafood Wholesale Market in the Chinese city of Wuhan, some are not.

• Late December 2019: Chinese physicians begin to suspect something is out of the ordinary as patients continue showing up with symptoms similar to pneumonia. The Chinese Centers for Disease Control and Prevention first reports on the outbreak, and the Wuhan health service issues warnings on Chinese social media.

• Jan. 3: Chinese scientists identify the virus and name it 2019-nCoV. Secretary of the U.S. Department of Health and Human Services Alex Azar learns that a U.S. CDC official has discussed the virus with Chinese doctors.

• Jan. 8: A 61-year-old regular customer of the Huanan market becomes the first death attributable to coronavirus.

• Jan. 12: First reported case outside of China, in Thailand.

• Jan. 21: The World Health Organization issues its first report on the situation. The United States reports its first case, in Washington state.

• Jan. 22: Chinese government suspends public transportation, flights and trains out of Wuhan, orders citizens to wear masks in public. WHO issues its second report on the situation. The virus spreads to Macao, Singapore and Vietnam. President Donald Trump tells CNBC, “We have it totally under control. It’s one person coming in from China.”

• Jan. 23: WHO issues its third report on the situation. The virus spreads to France and Nepal.

• Jan. 24: The virus spreads to Australia, Canada and Malaysia.

• Jan. 28: The virus spreads to Finland and United Arab Emirates.

• Jan. 30: Director-general of WHO declares coronavirus a “Public Health Emergency of International Concern.” The virus spreads to Spain, the United Kingdom, Sweden and Russia.

• Feb. 1: A total of eight cases are reported in four U.S. states. WHO issues its 12th report on the situation.

• Feb. 2: President Trump tells Sean Hannity, “We pretty much shut it down coming in from China. It’s going to be fine.”

• Feb. 5: American Airlines and United Airlines stop flying to and from Hong Kong.

• Feb. 15: U.S. passengers on the cruise ship Diamond Princess are evacuated and quarantined.

• Feb. 24: President Trump tweets, “The Coronavirus is very much under control in the USA… Stock Market starting to look very good to me!”

• Feb. 26: In a press briefing, President Trump says, “We’re going very substantially down, not up.”

• Feb. 27: During a White House reception, President Trump says, “One day it’s like a miracle, it will disappear.”

• March 1: A total of 88 cases are reported in 12 U.S. states. First coronavirus death in United States is reported.

• March 8: President Trump tweets, “We have a perfectly coordinated and fine tuned plan at the White House for our attack on Coronavirus.”

• March 9: President Trump tweets, “The Fake News media & their partner, the Democrat Party, is doing everything within its semi-considerable power to inflame the Coronavirus situation.”

• March 10: N.C. Gov. Roy Cooper declares a state of emergency. President Trump tells reporters on Capitol Hill, “It will go away. Just stay calm. It will go away.” Coachella festival slated for mid-April is postponed to October.

• March 11: The National Basketball Association suspends its season after a player tests positive for coronavirus. Western Carolina University, in conjunction with the entire UNC system, moves all instruction online.

• March 18: Harrah’s Cherokee Casino Resort closes through April 1. That closure is later extended to April 15. Cherokee County (not to be confused with the Qualla Boundary) announces first positive coronavirus test.

• March 19: The media reports that Sen. Richard Burr, R-NC, sold 33 stocks worth between $628,033 and $1.7 million in mid-February following a briefing regarding the coronavirus.

• March 20: Primary election runoff in North Carolina’s 11th Congressional District is moved from May 12 to June 23.

• March 26: DJIA rebounds to 22,552, still 23.7 percent off six-month high. Haywood County issues a “Stay home, stay safe” order valid through April 16. Macon County and the town of Franklin do likewise, although the order does not affect the town of Highlands.