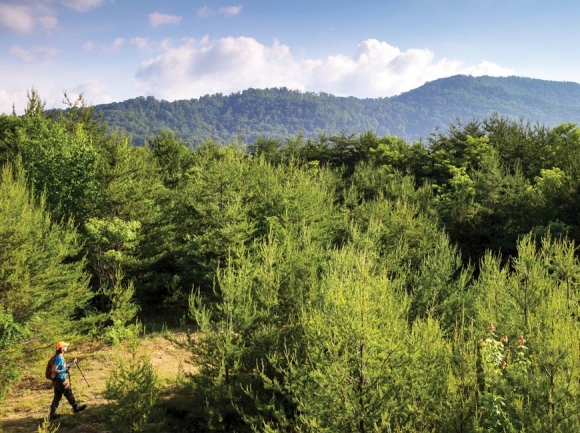 If all goes as planned, Canton will soon have a 448-acre park for hiking, mountain biking and other outdoor recreation activities just a mile from town limits. The Southern Appalachian Highlands Conservancy hopes to close on the property, known as the Chestnut Mountain Tract and currently owned by Canton Motorsports LLC, within the next couple months.

“It’s amazing what’s going to happen, not just for quality of life and economic development, but also at the end of the day we preserve 450 acres which could have been developed by who knows what,” Canton Mayor Zeb Smathers said during a March 12 town meeting. “We kept that the way God intended it, and now we’re using it.”

SAHC has been working on the purchase for much of the past year, applying for grants and working with donors to pull together the funds needed to buy the property outright. In September, the land trust was awarded $1.2 million from the Clean Water Management Trust Fund, with the Pigeon River Fund of the Community Foundation of Western North Carolina contributing $25,000 with a grant announced in November. However, it wasn’t until last week that the land trust publicly announced the project, following a $150,000 N.C. Department of Justice Environmental Enhancement Grant.

Gift to the town

SAHC is still in the due diligence phase of the purchase and had hoped to close by the end of the month. However, a contract extension was necessary to resolve some details of the transaction. The land trust has secured private gifts for approximately half of the purchase price and grants for most of the remainder, said Muerdter, but it is currently fundraising for about $350,000 to complete the purchase and cover transaction costs. The Conservation Fund has offered a bridge loan to allow SAHC to go through with the purchase as it continues to fundraise the final dollars.

A native of Bethel, Muerdter said that she remembers being in high school when plans were being laid to turn the property into a speedway. Those dreams never came to fruition, and the property was never developed.

“Now that we’re working to secure the property for conservation, my hope is that the permanent protection of this land will protect wildlife habitat and water, while also allowing a place for the community to enjoy,” she said. 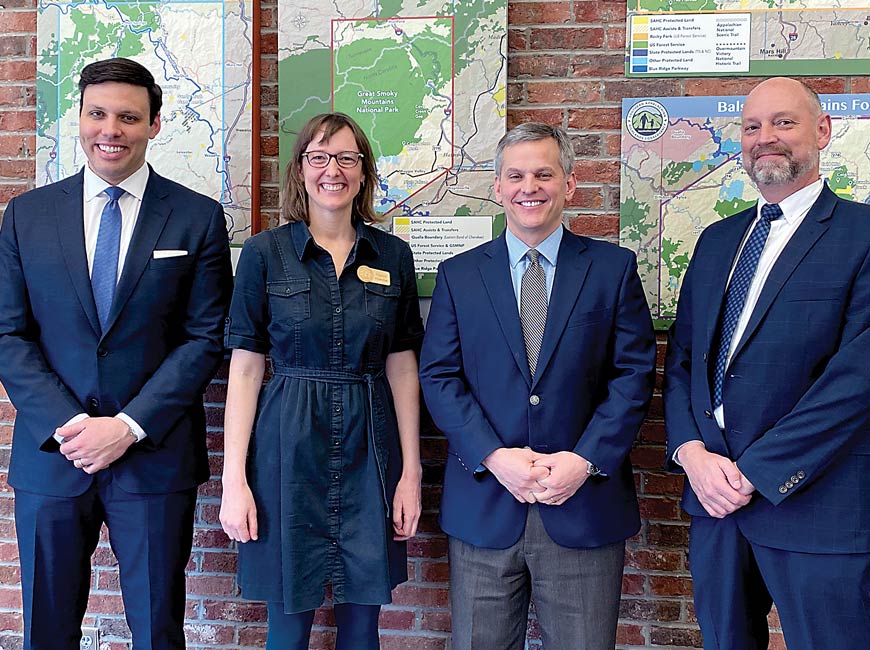 The Chestnut Mountain Tract is one of the last large-acreage properties left along the Haywood-Buncombe county line, and conserving it is important for several reasons, said Muerdter. It’s already been shown to be an important corridor for wildlife movement, and with Asheville-associated development pushing ever outward it’s important to protect these last swathes of undeveloped acreage while it’s still possible.

“If you live in the Town of Canton or Clyde or Waynesville, you have to go to the edges of the county to get to public trails or the Blue Ridge Parkway, Shining Rock, the Smokies,” said Muerdter. “There’s not much large acreage if you live close to town. But this could potentially provide that opportunity.”

SAHC plans to gift the land to the Town of Canton, with Haywood County collaborating on management. The transfer will likely take place about a year after the sale to give SAHC time to, among other things, determine what types of conservation easements to place on the property and where to locate them. As a land trust, SAHC shies away from owning places that are for public recreation, preferring instead to transfer them to public entities.

Luckily, both Canton and Haywood County are excited about the opportunity. It’s a “gamechanger,” a “tremendous opportunity,” Smathers told his board.

“It is the intent of the town with assistance from Haywood County and with some of the other partners you’ll hear about over time to turn this into a major outdoor recreation venue concentrating on mountain biking, hiking, walking,” he said. “There are a lot of things it could be. We will take this slow. We’ll have a lot of public input. I want to hear a lot of thoughts. We’ll also be applying for a lot of grants over time.”

“One of the things that the county was looking at doing with their recreation program was moving more out of a brick-and-mortar and sports teams into a more outdoor recreation aspect, and this project came along at just as perfect timing as you could get,” said Haywood County Program Administrator David Francis. “Being up there, you can see a lot of potential.”

Right now, the plan is to develop trails for hiking and mountain biking on the property, with an emphasis on accessibility for all ages and skill levels. The property has some topography, but it’s not crazy steep — elevation varies between a low elevation of 2,365 and a high of 2,555.

While SAHC plans to give Canton the land outright, it won’t be providing the funds needed to turn the property into a recreation destination. Planning, building and maintaining the trails, parking areas, picnic spots or whatever else ends up being built on the land will take time and cost money.

“The idea is to try to leverage and lean on a lot of different resources to help make a thing like this happen,” said Muerdter.

However, once developed, recreational opportunities on the tract could prove pivotal for the town’s future. In his comments, Smathers compared the possible impact to that of DuPont State Recreational Forest opening in Transylvania and Henderson counties, spurring the birth of various biking shops, outdoors stores and breweries in the area.

If the purchase and transfer go through, the Chestnut Mountain Property would not be the only large, forested tract owned by the town. Canton also manages the Rough Creek Watershed, an 870-acre property that once served as the town’s water source. Containing a diverse plant and animal community similar to that found in the Great Smoky Mountains National Park, it contains a lightly used network of hiking trails and was home to a community of pioneers from the 1800s through the early 1900s.

According to Muerdter, the properties will compliment each other nicely.

“Rough Creek Watershed is really beautiful, but it’s also hard to get to,” she said. “This property is so much more accessible, and the Rough Creek Watershed also has these high-elevation glade communities that are really ecologically significant. This Chestnut Mountain Property is ecologically important, but it doesn’t have these super significant plant communities, so the Chestnut Mountain Project is actually a pretty suitable one for conservation and recreation working together.” 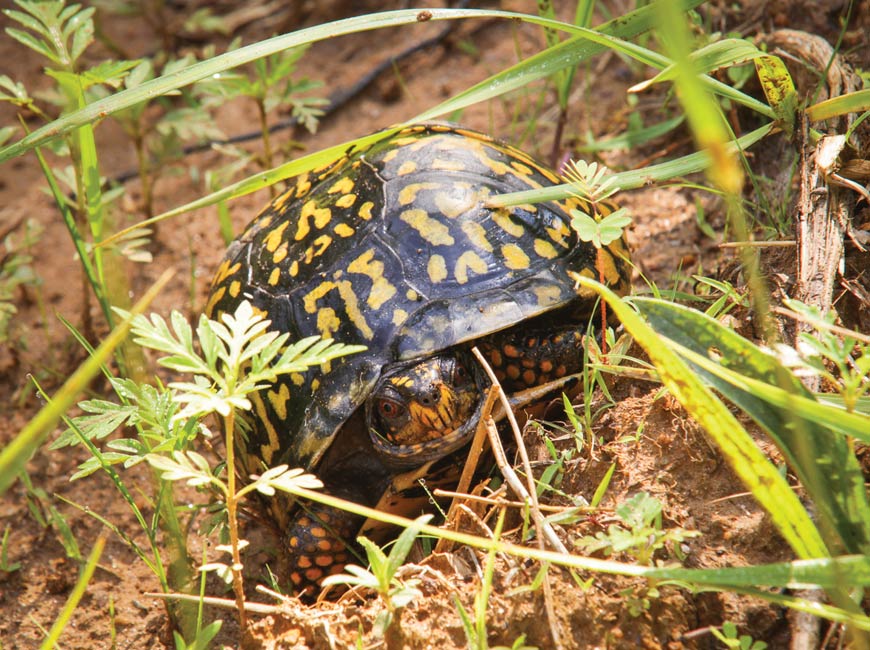 The eastern box turtle is one of the many wildlife species to find a home on the property. SAHC photo

Canton isn’t the only town in Western North Carolina to be getting into the outdoor recreation business. Since the 1990s, Sylva’s 1,088-acre Pinnacle Park has offered several high-exertion, high-reward hiking trails. Like Rough Creek, the area once served as the town’s water supply but is now used for recreation. Last year, Sylva increased that holding by 40 percent when it purchased the 441-acre Blackrock Creek tract, which abuts Pinnacle Park. Like Canton, Sylva is partnering with county government on the project, though no public planning process has yet begun.

“It’s a pretty exciting project that we’re working on, but the thing is that we need to remember we still haven’t bought the property,” he said. “We’re in the planning phase right now, so this is a project that is not going to be ready to go as soon as we buy the property.”

It will require public input, engineering studies, planning and fundraising to pull off.

“If we got something done in three years,” he said, “I’d think it’s great.”