Sharon Taylor was in her mid-30s when she left her office gig to return to school, hoping to pursue a career that would allow her to spend more time outdoors and less time handling fluorescent-lit paperwork.

After graduating from Western Carolina University with a degree in natural resources management, Taylor found a job at the Coweeta Hydrologic Laboratory in Macon County, where she worked as a research technician and enjoyed the full menu of retirement and health benefits to which she was entitled as an employee of the University of Georgia. Things were going well, and if she gave UGA the next 20 years, they’d give her a comfortable retirement.

So, when Paul Carlson asked her to come on board at his new nonprofit organization, Land Trust for the Little Tennessee, the answer seemed like an obvious no.

But Carlson did his best to persuade her with a simple appeal: “Come help me save the Needmore.” The tract straddled the Swain-Macon county line, and there was nothing protecting its incredible beauty and biodiversity from the accelerating development of the early 2000s. Now, more than 5,000 acres of the area are protected, including 4,800 acres that LTLT turned over to the N.C. Wildlife Resources Commission to become the Needmore Game Lands.

Taylor, now 63, was instrumental in those efforts. Carlson’s appeal worked.

“Everybody thought I was nuts,” said Taylor.

In 2001 she became just the third employee at the four-year-old homegrown nonprofit. LTLT was founded in 1997 after two years of informal meetings discussing the rapid pace of development in Western North Carolina, and the threats it posed to the region’s mountains, streams and farmlands.

“It was a big leap and it was scary, but I haven’t ever regretted a day,” said Taylor. “I don’t think Paul nor I could have imagined the success this organization would have.”

Carlson retired in 2014, and Taylor, then deputy director of the organization, took over the reins as executive director in 2015. She promised the nonprofit two or three more years of work before looking at retirement herself, but she ended up staying for five. Taylor left on Feb. 29 after 19 years with the organization. It’s been a more rewarding season than she could have dreamed.

Taylor’s tenure included renaming the organization as Mainspring Conservation Trust as its work pushed outside the borders of the Little Tennessee River’s watershed and expanded beyond land conservation deals to include environmental education too.

When the land trust first formed, not a single piece of land along the Little Tennessee’s main stem had been conserved. Now, three-quarters of it is protected. The organization’s staff has grown from three to 11, and its number of offices has tripled from one to three. Overall, Mainspring has either directly conserved or partnered to conserve more than 28,000 acres — and counting.

Storytelling was key to that success, said Taylor.

“We learned early on that it’s all about telling your story, and we did that with beautiful photographs and beautiful words,” she said. “With children and dogs and cats it’s so much easier, because you can tell those heart-wrenching stories. With land, those spot-finned chubs are not that endearing to anyone.”

Crafting a compelling story and broadcasting it to the world is therefore the key hurdle, and it’s one that Mainspring cleared well enough to raise the Little Tennessee watershed to an issue of national significance.

Over the years, Mainspring’s land conservation accomplishments have been many. It’s responsible for protecting the 70-acre Tessentee Bottomland Preserve in Macon County, the 53-acre Chunky Gal Tract in Clay County and the 50-acre Bo Cove Tract in Jackson County. There’s Sylva’s 1,088-acre Pinnacle Park as well as the 912 acres of adjoining land it recently helped conserve with other partners. Land conservation projects have taken place at Panthertown Valley, the Blue Ridge Parkway and at family farms sprinkled across the region. There’s a lot to be proud of, but when asked her biggest accomplishment over the past 19 years, Taylor didn’t name any of the above.

“I am so sincere in this,” she said. “The biggest accomplishment is building this smart, young staff that’s going to carry this mission forward.” 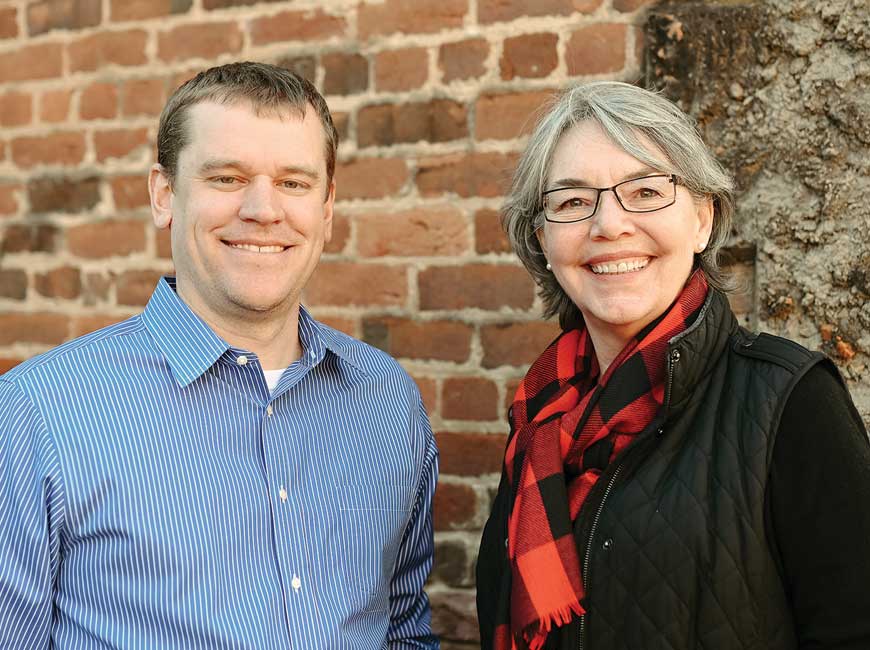 Taylor hired most of the people currently on staff at Mainspring, and one of those hires is Jordan Smith, who came on in 2016 as land conservation manager. Like Taylor, he left a well-paying job with stable prospects and benefits to come work for Mainspring and, also like Taylor, he hasn’t regretted it since. Especially after the board of directors chose him earlier this year to succeed Taylor as executive director.

When Taylor announced her impending retirement last July, Mainspring’s board decided to do a national search for her successor. The seven-member search committee interviewed several people from several places across the country, said Taylor. It just so happened that the right person was already working in the Franklin office.

“I just believe so strongly in what we do, it was almost a sense of responsibility,” Smith said of his decision to apply. “It felt like something I was meant to do. I wanted to pick up the ball and move things forward when Sharon decided to move on.”

Smith, like Taylor, is a homegrown product of the mountain region. Now 36, he lived in the Caney Fork community of Jackson County until sixth grade. When his parents divorced, they moved to Swain County, and he split his time between his mom’s house in Lower Alarka and his dad’s place in the Galbreath Creek Community. Like many young adults, Smith left his hometown for college and career, earning a wildlife management degree from Auburn University. He landed work as the hunting lease manager and recreational properties coordinator for the Westervelt Company in Tuscaloosa, Alabama, and then took a position as field supervisor for Brosnan Forest, the 16,000-acre working forest owned by Norfolk Southern Corporation in South Carolina. But he missed the mountains, and eventually he and his wife decided to they wanted to raise their two daughters back in Western North Carolina. Now they’re back at Galbreath Creek.

His wife found a job first. During one of their scouting trips up to North Carolina, Smith interviewed for a state job that he ended up not getting. But the interview itself opened the door to his offer from Mainspring.

“One of the people that interviewed Jordan in Raleigh sent this email out to all the land trusts in this part of the state and said, ‘I can’t hire this person, but if anyone has a job you should look at him,’” said Taylor.

She gave Smith a call, which just so happened to come the day before he was preparing to head back to South Carolina. Within two hours, he was at her office for an interview and hired pretty much on the spot.

It was a dream job, but still — he was giving up a position in his field that came with excellent pay and excellent benefits that would allow him to look seriously into retirement by his late 40s or early 50s.

“At the same time, it wasn’t a hard decision,” said Smith.

He was drawn to the organization, and to the work that it does. His colleagues share that passion, he said. That’s why Mainspring has been so successful and why its staff has remained so stable over time.

Smith is excited for what the coming years will bring, but he knows there will be challenges as well. Fundraising is always a big one — with 11 people on the payroll, it’s a constant effort to cover operations while also bringing in the money needed to fund the mission. Private funds and fundraising cover about three-quarters of Mainspring’s salary costs.

To secure the future, an endowment fund newly established in Taylor’s honor seeks to ensure that someday there will be enough automatic revenue to cover those overhead costs so that that fundraising efforts can focus more directly on conservation needs. But there’s still a long way to go until that’s a reality.

In general, Smith wants to keep Mainspring on the same successful path it’s currently walking. But down the road, he said, the land trust will eventually need to shift direction.

“As we continue to conserve land and protect lands that are worthy, our needs on the land conservation side of things are going to start to go down,” he said. “But on the flip side of that are the stewardship responsibilities, because it’s a huge burden and liability for this organization to take on conservation easements every year. On each one of those we have to monitor in perpetuity to make sure the terms of that easement are being honored.”

The risk of those terms being violated increases as time goes on and land changes hands. The new owners might not be fully aware of the easement’s existence, or of its seriousness and enforceability. In the future, Mainspring might find itself spending less time and money on conserving new properties than on protecting ones that are already conserved.

To that end, the organization has already put some effort toward planning its land acquisition strategy in the years ahead, spending the past two years working on a new conservation planning tool. The tool compiles more than 90 sets of data to look at Mainspring’s 1.8-million-acre service area and determine where Mainspring should direct its focus.

“We appreciate that there’s a place for development in our region,” said Smith. “That’s the only way our region is going to grow and thrive. It’s just a tool for us to decide what is the ‘best of the rest’ and where do we need to focus our work. Where is development maybe not the best idea?”

Still, he’s optimistic about the future and enthusiastic about his new role in helping to shape it locally.

“I’m super excited about it,” he said. “I love this place and I love what we do, and I believe in our mission. It’s an honor to be able to follow in Sharon’s footsteps.”