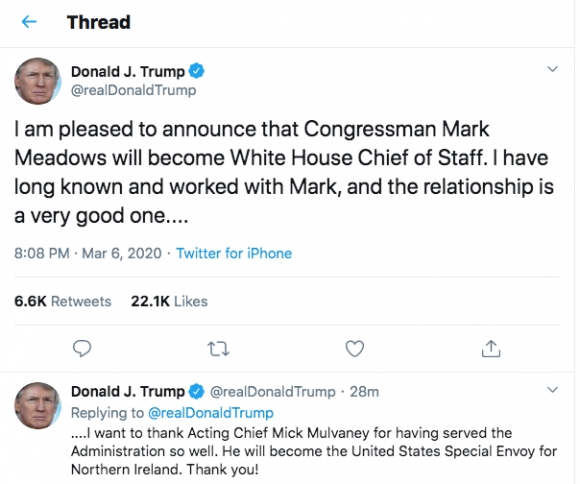 After more than two months of speculation as to his next move, Western North Carolina Congressman Mark Meadows will become President Donald Trump’s next chief of staff, as declared by the president in a tweet earlier tonight.

“I am pleased to announce that Congressman Mark Meadows will become White House Chief of Staff. I have long known and worked with Mark and the relationship is a very good one,” the president tweeted just after 8 p.m. Eastern time this evening.

Trump went on to thank acting Chief of Staff Mick Mulvaney for his service and reveal Mulvaney’s new role as a special envoy for Northern Ireland.

Meadows declined to seek reelection this year, and has come under fire from Republicans in his district for the way in which he announced his decision – at 5 a.m. on Dec. 19 to Politico, rather than any outlet in his district.

At the time of his announcement, there were less than 30 hours left in the candidate filing period.

Since then, Meadows’ anointed successor has weathered a series of campaign missteps, including the aforementioned advanced notice given only to Bennett.

Damaging audio recorded in 2016 suggests Bennett is a “never Trumper,” and a sham endorsement by a two-day-old PAC suggesting she was the only conservative Republican in the Primary Election has and will continue to dog Bennett as she heads into the May 12 runoff against Hendersonville resident Madison Cawthorn.

It remains to be seen if Meadows will resign from Congress ahead of his scheduled January, 2021 departure; Meadows has not responded to emails from The Smoky Mountain News for some time now.

It also remains to be seen how his endorsement of Bennett – who garnered just 22 percent of the vote in the March 3 Primary Election – might sully his new role, especially if Bennett can’t win her runoff or the General Election against Democrat and retired Air Force Col. Moe Davis.