A legend re-told: the story of Crazy Horse 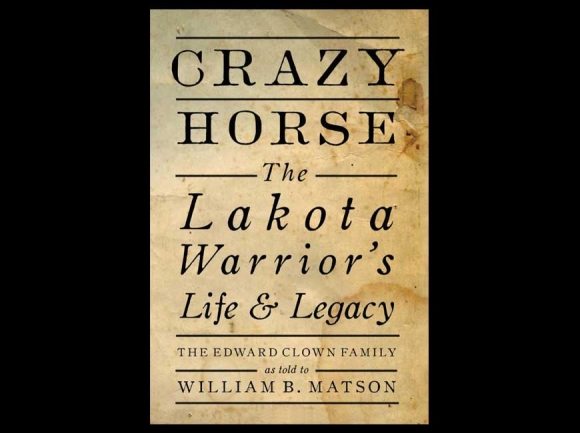 On Feb. 8, William B. Matson and members of the Clown/Crazy Horse family were scheduled to give a talk at the Jackson County Library in Sylva. I planned to attend, but unfortunately that was the day of the only snow and ice storm we’ve had all winter. So, as soon as I could get out I went to the library and checked out a copy of the as-told-to biography of the Crazy Horse/Clown family Crazy Horse: The Lakota Warrior’s Life & Legacy written by William Matson.

There have been many books (such as Mari Sandoz’s 1942 biography Crazy Horse: The Strange Man of the Oglalas) and many accounts of the life and adventures of Crazy Horse, but not until now has there been a book about the Lakota warrior and spiritual leader written by members of his own family.

In their own words we hear the history of the Lakota peoples as passed down through the generations as a part of their oral history method of archiving and retaining a detailed memory of the past. On the last page of this riveting book, Matson writes in the words of the Clown/Crazy Horse family: “We are happy that we finally have gotten our oral history into print. It is important that it be so. Our Nation has no future if it does not know its past. We would like to see our people throw off the yoke of those educated in other cultures who claim to have the knowledge to define our people and our people’s history. Crazy Horse once said that ‘a people without a history are like blades of grass in the wind.’ We are Lakota. We are a spiritual people, and a spiritual people are never beaten.”

What we have in Crazy Horse: The Lakota Warrior’s Life & Legacy is a riveting if not telling tale of the last 200 years of Lakota history with an apriori focus on the life and times of its legendary leader Crazy Horse that includes a 50-page appendix of the probate papers of the family’s genealogical records which adds additional credence to the words and claims collected here.

The Crazy Horse family kept their stories and history secret for many generations for fear of reprisal from the U.S. government and other sources that wanted either to usurp or squelch the truth about what went on during the Indian wars and after to minimize the stature and legend of Crazy Horse. He has always been viewed by the white political power structure in the U.S. as a threat and someone to be feared. While the life of Crazy Horse as told in this book is one of epic proportions, he was anything but a hostile and crazy or “strange” man as portrayed by Mari Sandoz. On page 40 we are told about Crazy Horse’s early life:

And for the next 120 pages we see evidence of his upbringing over and over again in a detailed portrait of his life and elevated spiritual status amongst all tribal peoples in the Dakotas and the Great Plains.

In Crazy Horse: The Lakota Warrior’s Life & Legacy we follow Crazy Horse and his family and tribal members through the entire 37 years of his life — from his hunter, warrior and spiritual training as a youth; to his marriage and family with his wife Black Shawl; to the early and almost miraculous descriptions of his heroics in battles with the U.S. cavalry; to his rise to prominence as a warrior and spiritual leader amongst the Lakota, Dakota and Nakota peoples; to his fight to keep the white miners and mining operations out of their homelands in the Black Hills region; to the legendary battle with Custer at The Greasy Grass (Little Big Horn); to his constant focus on keeping his people alive and well and living in the traditional ways that they had been living for hundreds if not thousands of years; and finally to his sad end as his people are starving after the buffalo herds (six million animals) had been slaughtered by the armies and white settlers; and his last days at the Fort Robinson Red Tail Agency and the lies and unfulfilled promises made to Crazy Horse and his people as just one of hundreds of agreements and treaties broken by the U.S. government.

While being a very enlightened history, the Clown/Crazy Horse family history is also a sad, even traumatic one that shows that the values and behavior of our country haven’t changed much since the European colonies were first established in the early 17th century. On page 159 we read the account of how in the late 19th century children were separated from their families and sent to BIA boarding schools under the slogan of “kill the Indians and save the man.” These practices seem very familiar to what we are hearing today that our current goverment is doing to and with Latino immigrants and would-be legal aliens. Seems that we don’t learn from history and that history keeps repeating itself as our modern-day Crazy Horses are eliminated by assassinations and other nefarious methods.

But Crazy Horse — who was known as a family man — was above all this, as is written by the family on a panel at the Indian Memorial at the Little Big Horn Battlefield National Park: “Our Grandfathers told us that all mankind were created equal and they represent the earth man with no skin color. In order to heal our Grandmother Earth we must unify through peace.”

(Thomas Crowe is a regular contributor to The Smoky Mountain News and is the author of an historical novel The Watcher based on Shaker history and set in Pleasant Hill, Kentucky. He lives in the Tuckasegee community of Jackson County and can be reached at This email address is being protected from spambots. You need JavaScript enabled to view it.)