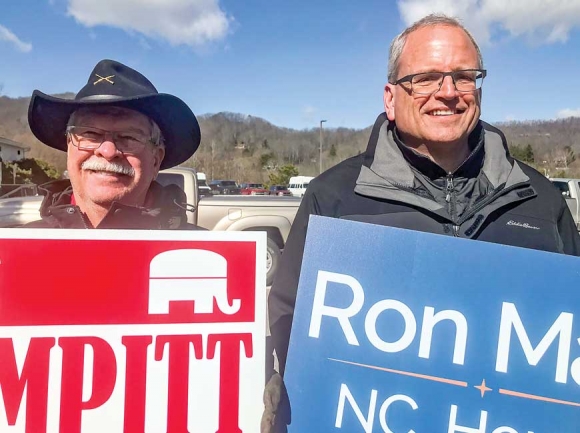 It looks like one of North Carolina’s longest-running political feuds will go another round.

“I’m so pleased and thankful to God to be the official nominee for the 119th District,’” said Bryson City Republican Mike Clampitt. “Now it’s time to start the ‘Say it ain’t so Joe,’ campaign. Or, a better one might be the ‘Joe’s got to go’ campaign.”

Nov. 3 will be the fifth time Clampitt faces incumbent Democratic Rep. Joe Sam Queen, of Waynesville. Queen won in 2012 and 2014 but lost in 2016 and then reclaimed the seat from Clampitt in 2018.

With 100 percent of the precincts reporting, Clampitt scored a decisive victory over Jackson County Commissioner Ron Mau. Clampitt earned more than 61 percent of the vote and will thus avoid a runoff.

“Well, I did spend two years in the House as the elected representative and had a working knowledge of that, and I got out and worked in the public and talked to people individually,” said Clampitt of why he prevailed in the March 3 primary. “Probably the other important factor is being a native of WNC. People recognized that and wanted a local to represent them.”