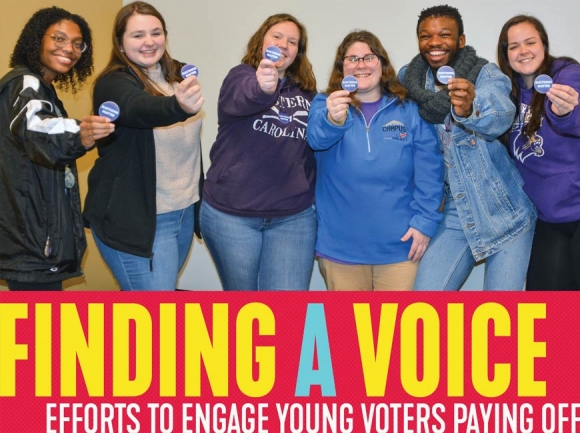 “I think campaigns are starting to crack the nut of youth voters,” said Dr. Chris Cooper, a political science professor at Western Carolina University. “It does look like youth turnout was up in the 2018 midterm election over the 2014 midterm election, and as for early signs in the 2020 election, in Iowa a fourth of the caucus-goers were youth voters. That’s a huge increase from four years ago.”

According to election data from Tufts University, youth voting did increase across the country in the 2018 midterm elections when compared to the 2014 election. In the majority of all states examined — 32 out of 42 — the increase in youth turnout exceeded the increase in turnout among the general electorate.

Cooper said the increase could be a result of more targeted messaging to youth voters through online platforms like YouTube, Facebook and Pandora regarding the issues they care about — something that wasn’t as easy to do 20 years ago when television was the main channel candidates used to reach voters. However, even with all the new ways to reach voters, that face-to-face contact is still one of the best ways to campaign.

“One thing that works for everybody is face-to-face contact — one face-to-face contact is worth more than all the TV ads in some ways,” he said. “We’ve also seen a decline in spending on TV ads and more specific messaging to young people, which is a lot easier now than it used to be. So candidates can talk less about Social Security to them and more about student loan debt for example.”

These figures show why political campaigns remain focused on the youth vote — they will soon have a majority of the voting power. While the youth vote is set to overtake Boomers as the largest voting bloc nationwide, WNC communities still have a large retirement electorate. Myrna Campbell, chairwoman of the Haywood County Democrats, said data from the N.C. Democratic Party indicates that 18-34-year-old voters constitute just over 12 percent of registered Democrats in Haywood County.

“Getting just half of them to be active voters could have a significant impact, especially in local elections,” she said. “While 12 percent is not a huge number, the leadership of the Haywood County Democratic Party has worked diligently to identify issues/topics of interest to young voters and the environment/climate issues have emerged as major areas of interest.”

“I think youth voters are most important because these are the people in the future that are really going to decide what happens in our future,” he said. “We’ve worked very hard to recruit college aged people who are now part of the Jackson party. Kayce is a very smart young lady and we’re pleased to have her on board.”

So how are they voting? Cooper said that has changed as well, and could be a reason more youth are registering to vote. They no longer feel pressured to register as one party or the other.

“There’s been a rise in unaffiliated voters, particularly in youth voters. Political parties is how we traditionally get people to vote, but people are increasingly opting out of party registration,” he said.

Even though young voters are more unaffiliated, Cooper said they still tend to vote more for Democrat and progressive candidates than they do for Republican or conservative candidates.

“There is evidence that in the last midterm the youth vote supported Democratic candidates in much larger numbers than they did four years before,” he said. “And if more youth got out to vote, the evidence suggests that it would help the Democratic Party more so than Republicans, but there’s a question about whether that’s because of age or if it’s generational. We wonder if it’s generational or if it’s just that young people tend to vote Democrat and older people tend to vote Republican.”

While that might be true in other more urban parts of the state and nation, Slaughter said, he has seen plenty of Republican support from WCU students.

“I think it’s entirely different out here where young people have grown up in the county,” he said. “I can only speak from what I’ve seen, but I think at Western at least we’re going to see a lot of youth supporting the Republican Party. Many of them do register unaffiliated but we do get a lot of their votes.” 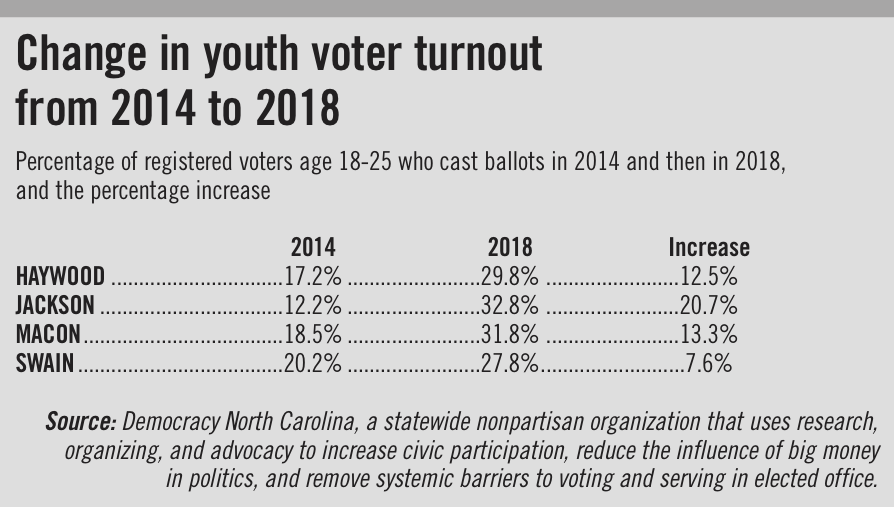 Campbell said the N.C. Democratic Party’s data indicates that the 18-34 age group constitutes 28 percent of the total number of unaffiliated voters in Haywood County, making it critically important for Haywood Democrats to reach and engage with that unaffiliated younger population.

“I’m currently working with a nonpartisan group to maximize voter registration efforts, and voter registration forms will be available at all of our Democratic Party events,” she said. “In addition, we are trying to identify social settings where young people tend to congregate to set up registration tables.”

State universities are often labeled as liberal breeding grounds, but Cooper and others say that’s not what they’ve experienced at WCU. While the data is somewhat dated now, polling done at North Carolina college campuses during the Obama-McCain race in 2008 showed the WCU electorate to be middle of the road.

“UNC-Chapel Hill was way left, Wingate was way right and WCU was smack dab in the middle,” Cooper said.

“A majority of our students who vote are unaffiliated voters. They’re not red or blue university — we’re more purple than anything else,” said Lane Perry, advisor of the Student Democracy Coalition at WCU. “Particularly in states with open primaries like North Carolina, being an unaffiliated voter is attractive for youth specifically because they’re still trying to figure out their personal and political values and those are not always mutually exclusive. They’re evolving as people and registering unaffiliated is a good place to feel out where you are.”

While the data is showing youth voters to be on the rise, and Cooper expects that to continue with the March 3 Primary coming up, he doesn’t think all the races on the ballot will get the attention they deserve.

“I’m still concerned about the ballot roll off. I think they’ll show up for the presidential primary and maybe will vote in the congressional races and hopefully the state legislature primary for Jackson County, but I think the lower down the ballot they get the higher the roll off will be,” he said.