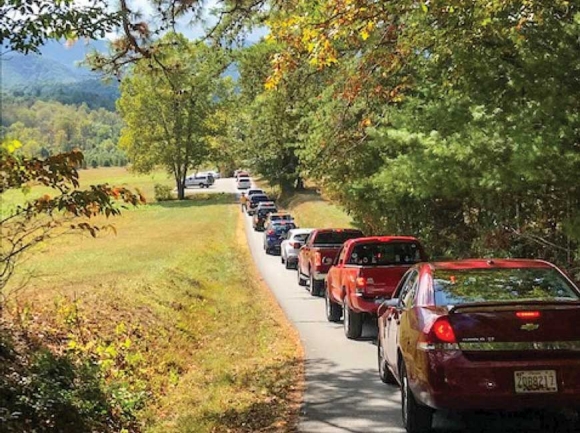 Traffic slows to a crawl through Cades Cove. NPS photo

The Smokies overall demolished visitation records, with preliminary numbers showing 12.55 million visits in 2019 — a 9.9 percent increase over the 11.42 million seen in 2018. Foothills Parkway West accounted for about 67.7 percent of the 1.3 million additional visitors after a new 16.5-mile section of the road opened in November 2018, making 2019 the first full year it was open. More than 1.5 million people drove on the 33-mile section that includes the new piece of road.

While the Foothills Parkway is the obvious source of the lion’s share of visitation increase, the North Carolina side of the park was also a driver. North Carolina’s numbers shot up by 8.3 percent, while in Tennessee visitation rose by only 6.1 percent when excluding the western portion of the Foothills Parkway. Despite the higher percentage increase, the actual number of surplus visitors was higher in the historically busier Tennessee side, with nearly 900,000 more visits than in 2018 compared to the just under 250,000 additional visits recorded in North Carolina.

Smokies spokesperson Dana Soehn said that parks across the country have seen a steady rise in visitation since 2016, the National Park Service’s centennial year. In 2016, the National Park Service launched a system-wide “Find Your Park” initiative urging people to get out and explore the national parks, and it seems to have worked. Systemwide, visitation leapt by 23.7 million between 2015 and 2016, and while the number of visits fell slightly between 2016 and 2017, the time visitors spent in the parks actually rose, increasing by 19 million hours to 1.44 billion total recreation hours. Visitation fell to 318.2 million in 2018 but still managed to be the third highest number ever logged since recordkeeping began in 1904.

With main entrances like Gatlinburg and Oconaluftee getting ever more crowded, the Smokies has aimed its messaging at promoting lesser-known areas of the park, which along with the opening of the new Foothills Parkway section may have contributed to the 20.6 percent increase in visitation to outlying areas between 2018 and 2019.

Some of the jump in visitation has a technical explanation, she said. In recent years many entrances have dealt with broken traffic counters, which tally the vehicles and use a multiplier to estimate visitation. Soehn said she “made it a mission” last year to get those counters fixed.

When the counters fail, the park plugs in the visitation number from the same month in the previous year, a method that Park Service statisticians say settles out over time but does result in some inaccuracies from year-to-year. For that reason, Soehn likes to examine 10-year trends rather than year-to-year fluctuations.

However, a look at 10-year trends doesn’t much change the overall picture of skyrocketing visitation in the Smokies — there were 32.2 percent more visits in 2019 than in 2009, when 9.5 million people came to the park. That said, the Tennessee side of the park definitely leads in 10-year growth. Excluding Foothills Parkway West, visitation in Tennessee grew 29.4 percent since 2009, while in North Carolina it increased 20.6 percent. The gap expands even more when including Foothills Parkway West visitation, with Tennessee entrances leaping to 37.5 percent growth. 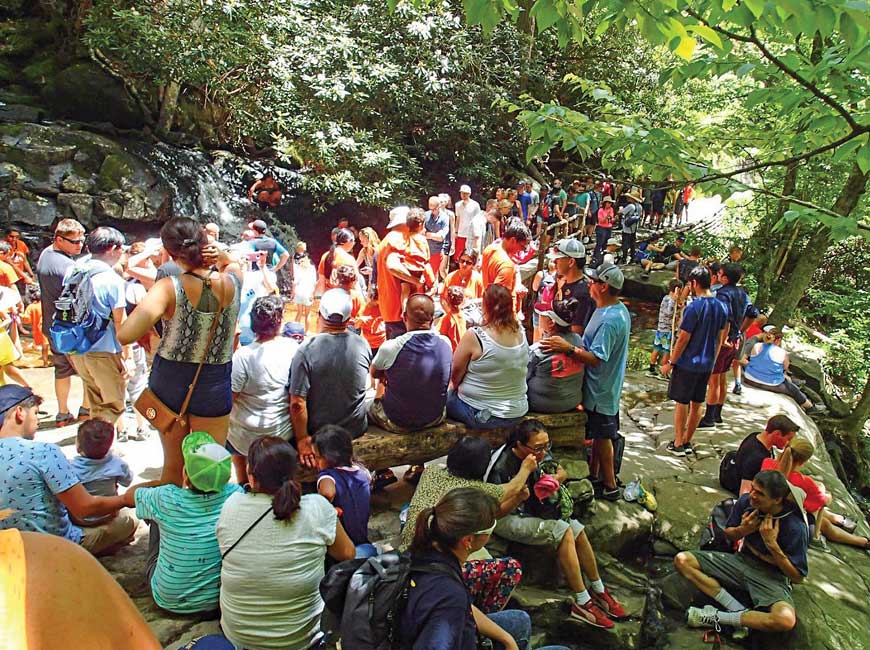 On a high-visitation day in the summer, there’s barely room to stand at the end of Laurel Falls Trail. NPS photo

The heightened interest in a trip to the Smokies bodes well for the National Park Service’s mission of providing for the “enjoyment, education and inspiration” of the public while also challenging the other part of that mission — to “preserve unimpaired the natural and cultural resources and values” of the land for current and future generations.

“I am very proud of our employees who work hard each day, along with our volunteers and partners, to help provide outstanding visitor experiences and to protect the resources that people come here to enjoy,” said Superintendent Cassius Cash. “With growing visitation, this has become more challenging. In 2020, we’ll be inviting people to help us thoughtfully look at how we can improve access and continue caring for this very special place.”

Beginning in late spring or early summer, the Smokies will start hosting listening sessions in parkside communities to better understand what people want from their park and what leadership can do to manage growing visitation in a way that works for everybody. The park is not entering into a formal visitor use planning process — at least not yet — but wants to start gathering input on the issue.

“We have been talking to parks across the country that are experiencing these kinds of congestion issues about ideas that they have introduced to better manage flow,” said Soehn. “What we have learned is there’s no one-size-fits-all.”

Some parks use a reservation system. Others use shuttles, or electronic gates or cameras at parking lots so people can monitor congestion online.

“We haven’t seen anything that we think will universally solve congestion issues in the Smokies, so we’re really coming to the communities with a white board asking for ideas that they may have and also asking about what they want their park experience to look like,” said Soehn.

According to Friends of the Smokies, the park’s nonprofit fundraising partner, the new visitation record is a reason why Smokies fans should increase their financial contributions to the free-to-enter park.

According to Soehn, traffic congestion and parking shortages are the main issues the park has seen as a result of heightened visitation.

“We’re having more congestion along roadways between those hours of 10 a.m. and 4 p.m. at iconic destinations like Clingmans Dome and Cades Cove, and what happens is people start to make their own parking areas,” she said.

With all the dedicated parking spots snatched up, people stop their cars along unsafe road shoulders, damaging the plant communities growing there and causing the edge of the pavement to crumble. It’s not uncommon for visitors to Clingmans Dome to have to walk a mile along the road to reach the parking lot from their self-created parking spot, or for a cruise along the 11-mile Cades Cove loop to take three or four hours. If that’s going to be the situation, said Soehn, the park needs to find better ways of letting people know so that they can be prepared to walk that extra mile or to drive for those extra hours.

She noted that, while parking and traffic congestion are causing problems, park staff have not specifically noted impacts to litter or wildlife related to the hike in visitation. The annual number of search-and-rescue operations and car accidents has stayed about the same in recent years.

“We don’t have litter issues parkwide,” she said. “It’s really concentrated in those areas where we have really high traffic, and some of those trailhead areas that are congested.”

The proliferation of volunteer programs might have a lot to do with the fact that car accidents, search-and-rescue calls and litter problems have not risen in step with visitation.

“Anecdotally we have over the last 10 years instigated more volunteer programs in areas where we were having trouble with particularly litter and wildlife interactions in places like the fields at Oconaluftee and Cataloochee and Laurel Falls Trail,” she said.

“We had some targeted programs in 2019 to increase participation,” she said. “We started offering one-day opportunities for people to get involved that were very popular and we saw an increase in people wanting to respond to help the park during the shutdown, so particularly around helping us with litter pickup along some of our busier roadways and busier trails.”

Growth on the Parkway

Unlike the Smokies, the Blue Ridge Parkway did not see a record-breaking year, with the preliminary figure of 14.98 million recreation visitors falling well short of the all-time record of 21.54 million set in 2002. However, the Parkway did see a modest increase of 1.9 percent over 2018, and in the portion of west of Asheville the jump was much larger.

Last winter certainly was a mild one, causing a reduced number of closures on the southernmost tip of the Parkway, which typically is barricaded for most of the winter. Additionally, said Brandon, in recent years there has been substantial tourism-related growth in communities along the southern end of the Parkway. In general, the North Carolina section sees more traffic than the Virginia section.

With growing visitation comes increased wear and tear on facilities, and with funding a perennial challenge the Parkway is working to build volunteer programs along its length to better educate the public about how to stay safe and protect park resources during their visit. One of the most recent additions to that effort is the new Balsam Chapter of Friends of the Blue Ridge Parkway, which seeks to support the Parkway’s mission through volunteerism.

“We’re very excited about that,” said Brandon. “It sounds like there’s a lot of folks with a lot of love at the southern end of the Parkway, so we’re excited for them to have a way to give back through the Friends.”