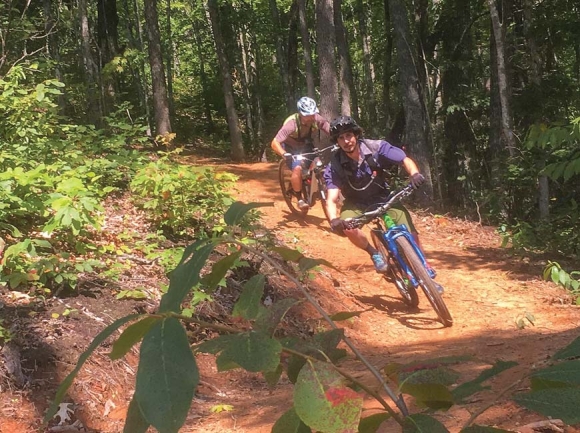 Motion Makers Bicycles in Cherokee is starting 2020 with a new location and a new roommate, but the same optimism about the future of outdoor sports on the Qualla Boundary.

The bike shop’s Cherokee location first opened 2018, sharing a two-story yellow building on Big Cove Road with Franklin-based outfitter Outdoor 76. The concept was solid, but the logistics proved problematic. Four months after opening in Cherokee, Outdoor 76 launched a third location in Clayton, Georgia. Travel between the three locations was time-consuming, and the two-story layout was a challenge.

“It was really hard to get people to go upstairs,” said Kent Cranford, who owns Motion Makers.

Outdoor 76 eventually decided to pull out of Cherokee, and Cranford reached out to see if Bryson City Outdoors might want to take their place. That business was interested in Cherokee, but not in the building.

“We basically said, ‘If you decide to move somewhere else, give us a call’,” said Brett Hackshaw, co-owner of Bryson City Outdoors.

Eventually, that call came. Cranford had long had his eye on a building on Tsali Boulevard across from the Cherokee Indian Fair Grounds, best known as the Old Teepee Restaurant and last home to the Fly Fishing Museum of the Southern Appalachians, which has since moved to Bryson City. The building is owned by the tribal government, but luckily for Cranford, Business Committee members were excited about the opportunity to lease it to a successful outdoor business.

Motion Makers is already set up at the new building, but Hackshaw and King are planning to open their section of the shop on Saturday, Feb. 1. Unlike their locations in Bryson City and Cullowhee, the Cherokee store will be called Fire Mountain Outpost after the popular trail system less than a mile away.

“Bryson City Outdoors obviously works in Bryson City, and it works on campus,” said King. “Over here we wanted to try something different, and we’re going to see what happens. I think it will be good with the partnership with Motion Makers and coming in as an outdoor store for Cherokee. But it’s just run by the same people that run your favorite outdoors stores in Cullowhee and Bryson City.”

At Fire Mountain Outpost, King and Hackshaw will sell all manner of gear and supplies to help tourists and locals alike explore the seemingly limitless trails around Cherokee.

“We sell a lot of the ‘I forgots,’” said Hackshaw. Sunglasses, water bottles, inexpensive tents — items that the Great Smoky Mountains National Park’s millions of annual visitors constantly find themselves in need of while on vacation. Keeping those types of supplies in stock has allowed Bryson City Outdoors to do a brisk business, but for Hackshaw and King it’s also about building community. The Cullowhee and Bryson City stores both feature a taproom where customers can come have a beer and talk about the day’s adventures. The taps in Cherokee will run with root beer and other alcohol-free drinks to help create that community hangout feel.

“Hopefully people will go ride the trails and come out here as a way to close out the day and talk about how the ride was,” said King.

Though, he said, one begets the other. The more businesses are open longer and more consistently across the seasons, the more Cherokee will become a hub for locals and tourists alike. 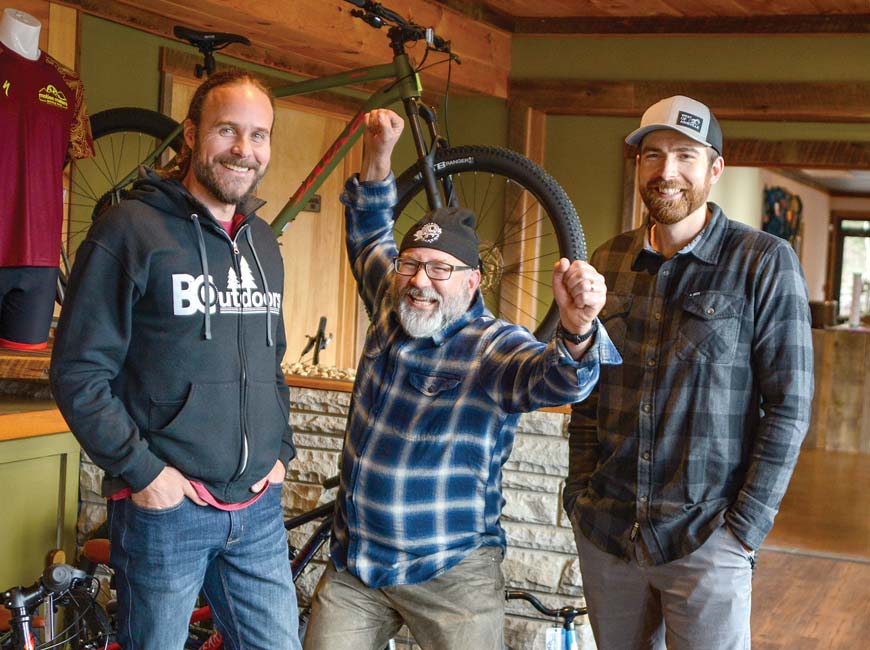 Despite its status as a gateway community to the 816-square-mile Great Smoky Mountains National Park, historically Cherokee has not had much of an outdoors industry. It’s been more about Native-themed shops and roadside attractions and, later on, the casino.

In 2019, the Smokies shattered visitation records by logging 12.55 million recreation visits, up from 11.42 million the year before, which was also a record; 2.43 million of those visits originated at the Oconaluftee entrance in Cherokee.

There’s also the Fire Mountain Trail System, which opened in 2017 as a 10.5-mile network. Anecdotal evidence indicates that the trails are extremely popular with mountain bikers from across the region, if not the country. Jeremy Hyatt, secretary of operations for the Eastern Band of Cherokee Indians, said that he expects to have a formal social and economic impact study on the trails complete by the end of the year, providing some hard data on use and visitation.

Fire Mountain’s trails have been hailed as “epic,” “the flowiest trails in the southeast” and “the biggest buzz in Cherokee since the casino,” but they’re still a work in progress. Crews are currently working to add a mile of beginner-friendly trail that will turn Tinker’s Dream — currently the system’s easiest trail, though an out-and-back endeavor — into a loop, also adding low-risk features for kids or beginning riders wanting to test out riding on obstacles like wooden rails.

Once that’s done, work will begin on an addendum to the hardest trail, Kate’s Wave.

Both projects should be finished by the end of March, with multiple other endeavors in the works. The tribe is negotiating in hopes of purchasing an additional 140 acres contiguous to the existing trail system that would allow the trails to go all the way up to the fire tower. And Hyatt is in ongoing talks with the Cherokee Indian Hospital about the potential of building a trail connecting Fire Mountain to the hospital campus. There’s a lot of support for a hospital connector, said Hyatt.

“We just haven’t got there yet,” he said.

There’s also the question of what’s going to happen with the 471-acre Shut-In Ridge property that the tribe closed on last year, part of an overall effort the N.C. Conservation Fund spearheaded to protect 912 acres in the Plott Balsams adjacent to Pinnacle Park. The Town of Sylva purchased 441.5 acres between Pinnacle Park and Shut-In, and both Sylva and the tribe have discussed the possibility of building trails for hiking or mountain biking on their respective properties.

“It would not be like Fire Mountain, I imagine,” said Hyatt. “I imagine it would be more akin to ‘Pisgah-eque’ trails — something that is not as groomed as this, not as condensed.”

Such a trail system is a future possibility, but no design work has been completed or decisions made on the fate of the property, other than the general goals of environmental conservation and outdoor recreation.

The folks at Motion Makers and Fire Mountain Outpost are willing to wait.

“The enthusiasm that we’ve all had about this is way more than I anticipated, honestly, and I’m a pretty enthusiastic guy,” said Hackshaw. “I was pretty concerned about it off the bat, and I’m not concerned anymore. We plan on being here a long time.”

Motion Makers is already open at its new location at 516 Tsali Boulevard in Cherokee, with Fire Mountain Outpost expected to be up and running by Saturday, Feb. 1. The stores plan to hold a grand opening event in conjunction with the Fire Mountain Inferno event slated for the first weekend in May.

During the winter, hours will be noon to 5 p.m. on Sundays and 10 a.m. to 6 p.m. otherwise. The store will be closed Tuesday and Wednesday, with the goal of operating seven days per week in the summer.