The next challenge: Hatton takes the reins at Sylva Police Department 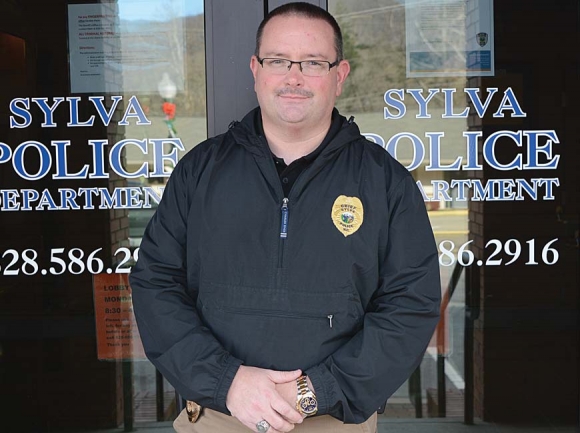 As police chief, Hatton oversees a budget of $1.3 million and a department of 14 sworn officers. Holly Kays photo

Sylva’s newest police chief was looking for the little town in Jackson County before he knew it existed.

Sylva has been Hatton’s home since taking the job in August 2019, and it’s proven a good fit — though busier than he expected going in.

“When I was researching Sylva trying to decide if this was somewhere fit for me to work, I saw 3,000 people and 14 officers and thought, ‘This is awesome,’” he told the town board during a Jan. 23 budget meeting. “Now here I am six months later saying I need more people.”

Fewer than 3,000 people actually reside in town limits, but Sylva sees a daily traffic volume north of 30,000. It’s home to the only Wal-Mart in the county, and a hub for tourists and Western Carolina University students. The police are policing many more than 3,000 people.

Hatton attributes that trend to a combination of drug-related issues and to people simply calling the police more readily then they have in the past.

“When I first started 20 years ago, people only called the police when something was wrong,” he said. “Something has happened so bad that I can’t handle it myself and I have to call the police to help me with it. That’s not the case now. People will call for anything, and I mean anything.”

People call the department for help chasing wildlife out of their garage or to mediate a disagreement between neighbors. Elderly people ask for help with various tasks, and homeless people ask for help finding a place to sleep. Hatton recalled a recent incident in which an officer was called to Wal-Mart to deal with a women who was yelling and screaming in the parking lot. It turned out she was from another state, and she’d been dropped off there alone, with no money and a phone that was out of minutes. The officer calmed her down, bought her some minutes and stayed with her while she called someone from out of state.

“He probably spent an hour and a half with her getting all that done, and for us that’s a no report kind of call,” said Hatton. “No crime happened, no stat for that.”

Those are the kinds of calls officers actually love to respond to, he noted. It’s just difficult when the volume is so great.

“If we don’t get more folks, service is going to have to sacrifice somewhere,” he told the town board last week. “At some point we’ll have to stop doing something that we’re doing. That’s alarming for me, so I’m sort of ringing the bell here.” 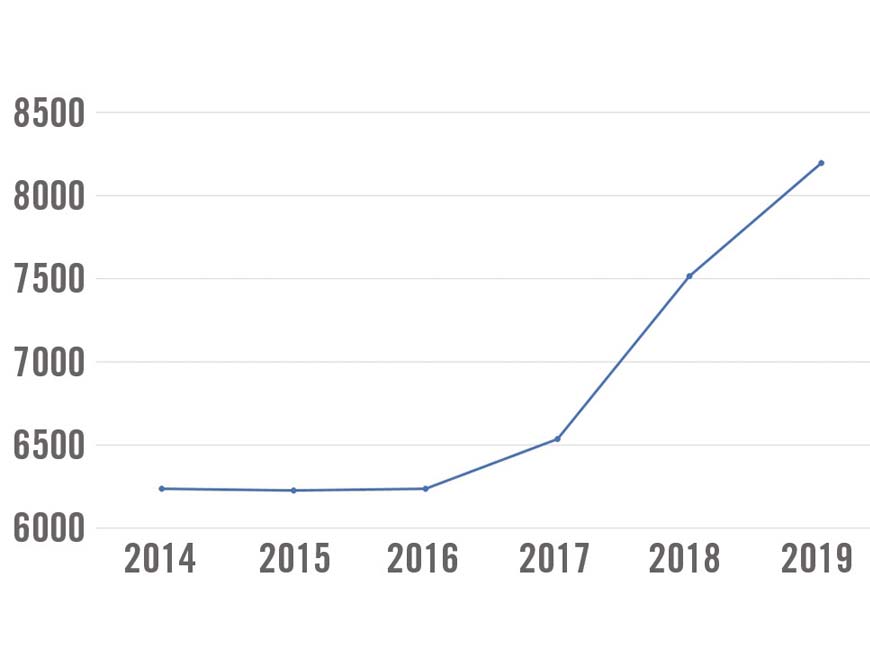 Calls for service have increased dramatically in the past three years. Donated graphic

When Hatton entered the police academy in 1997, it was “an exploratory thing,” he said — he wasn’t sold on law enforcement as a career.

“When I got in I was even a little leery of police officers then,” he said. “I didn’t know what I was going to learn once I got in, but what I found was the most noble group of people that I’ve ever been around.”

He graduated the academy with the highest test score in his class and took a job at the Lenoir Police Department, which would lead to a series of events that would instill an abiding conviction in the power of police to affect their communities for good.

As a rookie officer, Hatton was stationed in one of Lenoir’s tougher, lower-income areas. At the time, it was pretty much standard to put new officers in those types of situations, the idea being that if you can police there, you can police anywhere.

Violence and drugs permeated the neighborhood, but Hatton quickly found that most of the residents were good people wanting to live a peaceful and productive life.

“There were a few people ruining that for them,” he said. “One particular little lady comes to mind — her name was Betsy, and Betsy was the sweetest old lady you could ever meet, but she was afraid.”

She didn’t have enough money to move, so instead she stayed indoors and slept in the center of her house, away from any windows that could let in a stray bullet.

“That lit the fire for me for drug work, because I could see what crack cocaine was doing to the neighborhood,” said Hatton.

After about four years on the job, the Caldwell County Sheriff’s Office — Lenoir is in Caldwell County — offered Hatton a position as a narcotics investigator, and he spent the next six years as an undercover detective. For part of that time, he was also sworn with the U.S. Drug Enforcement Agency.

Hatton and his colleagues worked hard to not only capture drugs that had already arrived in Caldwell County but to track them to their source in Atlanta. They carried out some massive arrests and prosecuted a lot of people in federal court.

“It wasn’t an easy road and it wasn’t a passive road,” he said. “It was an aggressive road, because we had to do it through strength and not just being nice to everybody.”

The magnitude of the arrests hit the community hard. But ultimately, Hatton believes, the pain was worth it.

“While the prosecution was going on, I started seeing people planting flowers in their yards, doing things outside,” he said. “It was really cool to see this community come out of the house and live what we think of as a normal life.”

The experience took its toll, though. Once it was all over, Hatton was ready for a calmer assignment, and for the chance to fulfill a longtime goal of earning his bachelor’s degree.

“We ran hard for six years, and honestly about all of us paid a real personal toll for that,” he said. “It was not easy on our families. Maybe we should have gone home a few days when we stayed and worked. But it’s one of the most gratifying things I’ve ever done, because you could daily see your work changing people’s lives. You could see it. And that was like a drug to me.”

Hatton, his wife, and his K-9 Ria moved to the Raleigh-area town of Rolesville, where Hatton became a patrol supervisor with the Rolesville Police Department. When Hatton got Ria, he’d made sure to set it up so she would stay with him, regardless of where his career took him. He owned the dog, and the county just leased her.

Rescued from a kill shelter, Ria was “the best dog that ever lived,” Hatton said. They worked together for six years, and she lived for three more after that. There’s a painting of her on the wall of his new office in Sylva.

There was still one more move between Hatton and his new home in Sylva, though. After four years in Rolesville he got a call from the Boone Police Department about a job opening for a narcotics sergeant. When he told his wife about the possibility, her eyes lit up, he said — her family is in Asheville, and she wanted to be closer. Hatton held the narcotics sergeant job for 1.5 years and then was promoted to investigations manager, a job he did for six years. During that time he completed his bachelor’s degree and also finished a master’s of justice administration.

“Boone was really good to me, for sure, but I was ready for the next step,” he said. “I was kind of getting sort of complacent in my job. I can’t sit still, which is one of my problems — as soon as I feel like I’ve mastered what I’m doing, I’m ready for the next challenge.” 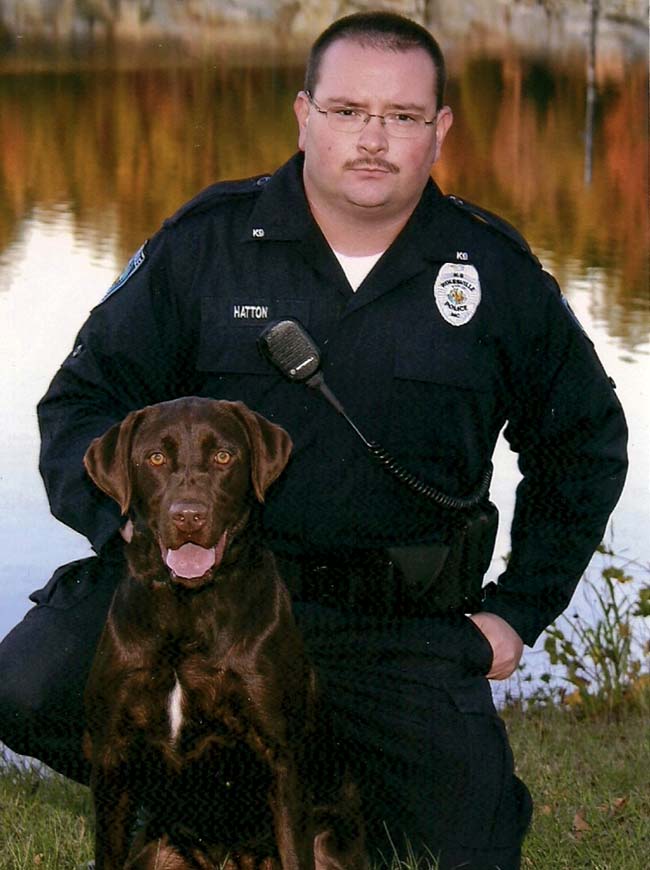 Sylva Police Chief Chris Hatton and his K-9 Ria worked as a team during his tenure in Caldwell County and Rolesville. Donated photo

Planning for the future

The next challenge, Hatton decided, should be a job as a police chief. He visited Sylva with his wife and knew immediately it was the right place for them.

“We fell in love instantly here,” he said. “We just love this place. It gets you first because it’s beautiful to look at, and when you meet the people it’s over. They’ve got you.”

It’s a great community and an upstanding department, but that doesn’t mean there’s not plenty for a new police chief to do. The need for more officers is certainly a challenge — Hatton has found himself filling in on patrol and responding to calls, tasks that fall outside what a police chief is typically paid to do.

It’s increasingly difficult to find qualified people for law enforcement jobs, and that fact compounds the difficulty. Fewer people want to go into law enforcement these days, so it’s important not to exasperate existing employees.

Internal processes have also been a focus. The department has a backlog of evidence and unclaimed property. Hatton wants to get some software in place to simplify management of all that, and to generally increase the time efficiency involved with office-based tasks like filing police reports.

He’s also been researching effective options for nonlethal use of force. Hatton wants his officers to have options other than deadly force, but that’s not as easy as it seems.

“The problem with nonlethal stuff is it sounds great when you’re talking about it, but in the real world, actual application, they’re not as good as what you think they are,” he said.

Finding the right solution — and the funds to enact it — will be a lengthy process.

But in the meantime, Hatton and the rest of his department can certainly deploy what he sees as the most important tool any law enforcement organization possesses — relationships with people.

“I’ve walked with Black Lives Matter protests and I’ve walked with police protests, and I’m walking in uniform beside people who are yelling, ‘Death to police officers,’ and yet they’re glad I’m there,” he said. “They always say to me, ‘We’re not talking about you guys. You guys are great. We’re talking about those other guys.’ It’s my opinion that there are no other guys.”

Not to say that there are no bad cops, said Hatton — just that they are few and far between and tend not to last that long in the profession. Most disagreements about police action dissipate when citizens have the chance to sit down with officers and hear an explanation of what decisions were made in a given instance, and why. In Boone, one of his roles was to have those conversations with residents and organizations, to help build bridges between law enforcement and the community at large.

“I would sit down and say, ‘What’s your organization’s mission statement?’ and then I would say, ‘Here’s mine,’” Hatton said. “And guess what? They’re the same things. We want the same things. The question is, how are we going to do it?”