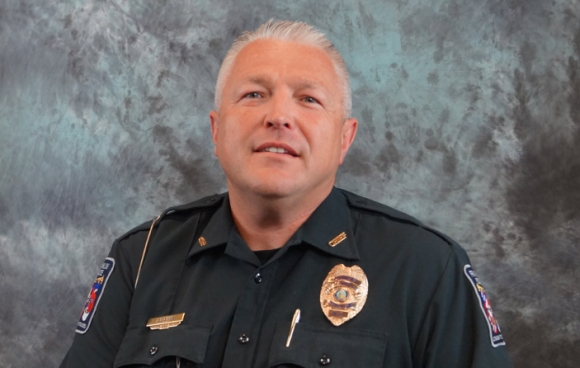 Franklin Police Chief David Adams will have some big shoes to fill when he becomes Waynesville’s new police chief, but according to Waynesville Town Manager Rob Hites, Adams is the right person to fill them.

After more than 20 years at the helm of the Waynesville Police Department, Bill Hollingsed announced last May that he’d step down as chief, effective June 30. Since then, the town has been engaged in a methodical process to identify his replacement.

More than 30 candidates applied through a professional search firm. The top 11 applicants went through an oral interview with a retired police chief who is part of the search firm. After scoring, that pool was narrowed to seven.

“I interviewed every one of the seven to make sure I knew them firsthand,” Hites said of the firm’s final candidates. “I think we all came up with the same selection.”

That selection ended up being a Western North Carolina native with plenty of regional experience.

“Waynesville is known as one of the best departments in all of Western North Carolina and probably the state,” said Adams, who starts in his new position on Feb. 27. “Chief Hollingsed did a phenomenal job with technology, with equipment, with manpower. He’s very well respected.”

So well respected, in fact, that he was named the executive director of the North Carolina Association of Chiefs of Police a few days before his official retirement; as such, Haywood County resident Hollingsed will continue to loom large over North Carolina’s law enforcement community, from Waynesville to Wilmington.

In the council-manager form of municipal government, the only people the mayor and Board of Aldermen directly hire are the city attorney and the town manager. As town manager, Hites had the final say-so on naming Adams.

According to a press release issued by the Town of Waynesville on the afternoon of Jan. 24, Adams has 20 years of experience, the last eight as chief of the Franklin Police Department. Over those two decades he’s worked at almost all levels of law enforcement, including on patrol, as a detective and as a captain of the Criminal Investigations Bureau of the City of Hendersonville’s police department.

Adams earned a bachelor’s degree in criminal justice as well as a master’s degree in management and leadership but continues to engage in ongoing professional development opportunities like the FBI’s Leadership Training and Command College, the Public Executive Leadership Academy at UNC-Chapel Hill’s School of Government and several other programs at the N.C. Justice Academy. He’s also a former squad leader and paratrooper in the 82nd Airborne Division of the Unites States Army.

“He had the combination of experience and formal training that I believe is necessary to keep the department moving in the manner that Chief Hollingsed had it moving,” Hites said. “On top of that, he’s a WNC born-and-bred chief and already works in our judicial district, so he knows the district attorney and the prosecutors.”

“It’s mostly the same on smaller scale — opioids, meth, heroin,” he said of Waynesville, compared to Hendersonville. “And the homeless issue, it’s a nationwide epidemic.”

His mission, he said, is to keep improving the reputation of a well-respected department and to push community engagement.

“I’m looking forward to a great opportunity, and meeting citizens, business owners and staff,” said Adams. “I have an open door policy.”

Hites, however, did remark that the hiring of Adams wasn’t without a small bit of sadness.

“The biggest regret I have,” he said, “is taking him away from a town I have a lot of respect for.”