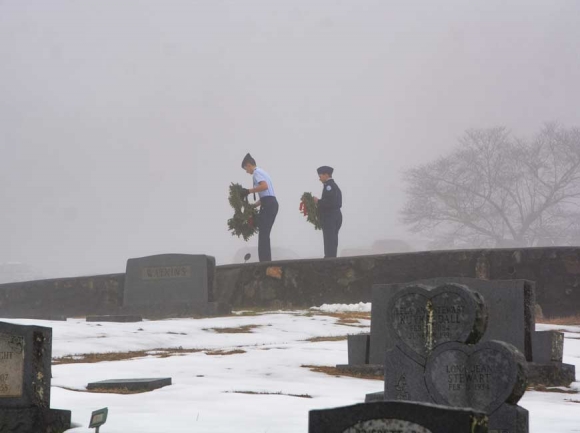 Proposed changes to and clarifications of cemetery ordinances prompted by public outcry in Waynesville will soon undergo a period of public comment before possible adoption by the town’s Board of Aldermen.

“What we can do is to endeavor that nothing like that ever happens again, and the plan the Cemetery Committee came up with is a huge step in that direction,” said Waynesville Alderman Jon Feichter.

Back near the end of 2018, family members with burial plots in Waynesville’s historic Green Hill Cemetery were taken by surprise when a proscribed cleanup resulted in flowers, lights, statues and other adornments being cleared from gravesites.

“It obviously was heartbreaking, because I understood how damaging it was to so many people,” said Feichter, who first heard citizen concerns during a meeting at the VFW that he called maybe the most difficult two hours of his first term. “We deserved every bit of frustration and anger those people voiced.”

A contentious and emotional town meeting a few days later featured extensive public criticism, so the town responded by establishing an ad-hoc committee to reassess management of the cemetery.

That committee met 13 times between May 16, 2019, and Nov. 7, 2019, — exactly as many times as the Board of Aldermen itself, Assistant Town Manager Amie Owens told Mayor Gary Caldwell and aldermen John Feichter, Chuck Dickson and Anthony Sutton during a presentation Jan. 14.

As they worked through the existing ordinance — Chapter 18 — the committee not only clarified some ambiguities, but also included some new provisions seen as a direct response to the complaints lodged in 2018.

Among them are the complete elimination of commercial tours, a reversal on previous language that banned lights and a concept called “memorial boxes” that provide a way for loved ones to leave mementoes without disrupting the efficiency of taxpayer-funded grounds-keeping operations.

“I haven’t completely gone through the changes, but based on what I’ve seen so far I’m thoroughly impressed with the work the committee did,” Feichter said.

Currently, the proposed changes remain just that — proposed. If 2018 is any indication, there will be a prolonged period of debate over the many alterations and additions to the existing ordinance.

“Based on some of the comments made at the meeting last week, it seems there may be a need for increased appropriations, and I think we should look further at that but we don’t know at this time what is needed,” Feichter said.

During that same Jan. 14 meeting, aldermen also converted the “ad hoc” Cemetery Committee into a standing committee; the seven members who currently serve were appointed by application and will continue to serve until June 30, 2020, which is the end of the fiscal year.

After that, seven more members will be appointed by a process similar to every other standing committee’s, serving terms from one to three years.

“I thoroughly support that idea,” said Feichter. “When we were discussing the parameters of what this committee would look like, I was completely in favor of including this cemetery as a way of looking at where we are, and where we’ve come from.”

Ownership of the property isn’t clear and despite the town already contributing some upkeep to it, the knobby plot — which may contain thousands of unmarked graves — has fallen into disrepair.

The revamped cemetery ordinance will be presented for public comment in a pair of meetings, scheduled for Jan. 28 and Feb. 11.

“I’d be dumbfounded if the room isn’t packed,” Feichter said. “I’m really looking forward to those comments sessions. I’m hopeful the people who care about this jewel of a cemetery show up and offer their input. That’s what I’d expect.”