The story of a Beat original 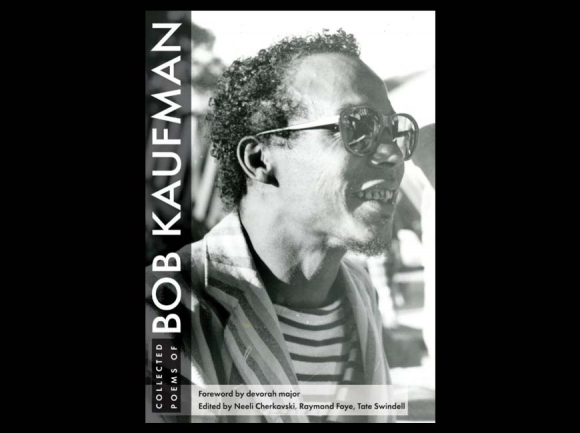 Once upon a time there was a poet named Bob Kaufman. He hadn’t spoken in anything resembling normal language in almost 12 years. Having taken a vow of silence as his own personal protest against American hyprocrisy and racial injustice, Bob Kaufman is probably the most important and unheralded of all the Beat generation literary luminaries. He was the true original. In the streets. On target. Under the radar. Yet at the forefront, breaking all the barriers.

An African American born in 1925 and originally from New Orleans, he ended up in San Francisco where I ran into him in the 1970s in the streets, cafes and bars in North Beach. As one of the original editors of the Beat mimeograph literary magazine Beatitude, he was already a local legend and heralded greatly in France as “the black Rimbaud.” But at this point in his life he was not speaking. Not complete sentences anyway. Occasionally a rare word or phrase would emerge from his lips and everyone present would stop what they were doing and take notice and try and attach meaning to his random utterings.

It wasn’t until the fall of 1974 that I heard him speak in a normal voice — one day sitting in Malvina’s Cafe when he literally jumped up on the table where I and a few other magazine editors were seated in a meeting to co-publish a book by a poet in San Quentin prison as he started reciting a lengthy oration of random excerpts by Whitman, Lorca, Keats, Eliot, Olson, Rimbaud and his own poems.

From this amazing performance it wasn’t long until we had organized a poetry reading for him at the Savoy Tivoli in North Beach where there were over a hundred and fifty people crammed into that small venue as well as at least that many in the street waiting to get in and to hear their Beat hero read for the first time in 12 years. Bob Kaufman delivered with lines like these: “Let us carry Inca staves to hawk-priest rituals on altars/of bleeding suns./Let us blow African jazz in Alabama jungles and wail/savage lovesongs of unchained fire./Let us melt jelly-like into damp caves of lip-biting women/and feel dew-charred dampnesses of gyrating/universes of smoke-flavored jazz.” And on and on it went like a tidal wave of hip observation and comprehension that covers the globe with delicate details and insightful images.

Kaufman’s crisp Whitmanesque jazz lines and style inspired and influenced people like Carl Solomon, who in turn inspired Allen Ginsberg, who influenced an expanded generation of peers and prodigy. While not a household name like Kerouac, Ferlinghetti, Corso, McClure and Burroughs, he was a major influence on them all. In short, he was a major influence on everyone that came into contract with him and/or his poems. Since his death in January of 1986 countless tributes have been written to and about him. Three of these tributes, as well as some excellent photos and a biographical chronology, are included in The Collected Poems of Bob Kaufman by two of the collection’s editors, Neeli Cherkovski and Raymond Foye, as well as a foreword by San Francsico native and family friend Devorah Major. Included are some revealing behind-the-scenes stories and revelations about the man, his work and the scene that he created and then presided over for well over thirty years.

In some literary circles Bob Kaufman is known as a “jazz poet.” And jazz was certainly ever-evident in the rhythmic structures and imagery of his poems. In collections that are now considered to be among his major contributions to American literature, such as Solitudes Crowded With Loneliness, Second April, Does the Secret Mind Whisper?, Golden Sardine and The Ancient Rain, we can experience the jazz influences in Kaufman’s verse, such as these lines in the poem “Tequila Jazz”: “Unseen wings of jazz,/Flapping, flapping,/Carry me off, carry me off./Dirt of a world covers me,/My secret heart,/Beating with unheard jazz.”

During the 1970s when I had almost daily contact with Kaufman, and after his cafe tabletop oration and that first reading at the Savoy Tivoli, Bob was included in almost every reading that was organized and held in San Francisco and the Bay Area and beyond. It was like something of a second-coming and everyone wanted to hear him again or for the first time. Major benefit readings that we organized for Beatitude magazine at Francis Ford Coppola’s Little Fox Theatre in his Zoetrope Productions building and then the First Annual San Francisco International Poetry Festival (1976) were prime examples of the demand for his presence and his poetry. Now, over 30 years since his death in 1986, with his poetry having been translated in several languages and with this City Lights Books publication of  The Collected Poems of Bob Kaufman we now have something that will surely put him in the pantheon of “the Beat Gods” with regards to the general public, as well as with archivists and special collections libraries around the globe.

It is often said of poets that they don’t get the kind of recognition that they deserve until after they die. In the case of Bob Kaufman this is true and it isn’t. He was a legend in certain circles of poets, musicians and artists during his lifetime, but now, since his death, enough books have been published and films have been made about his life and his work that he surely will be read and remembered for generations to come. Such is the importance and the quality of the work of this Beat original. I leave you with these lines from his poem “Falling Forward”: “All I know is this stillness/arising as absolute possibility,/a constant readiness to allow being./This is the movement of becoming./Why do I hesitate?”

Thomas Crowe is a regular contributor to The Smoky Mountain News. He is the author of Starting From San Francisco: The Baby Beat Generation and the Second San Francisco Renaissance. He lives in the Tuckasegee community in Jackson County. He can be reached at This email address is being protected from spambots. You need JavaScript enabled to view it.