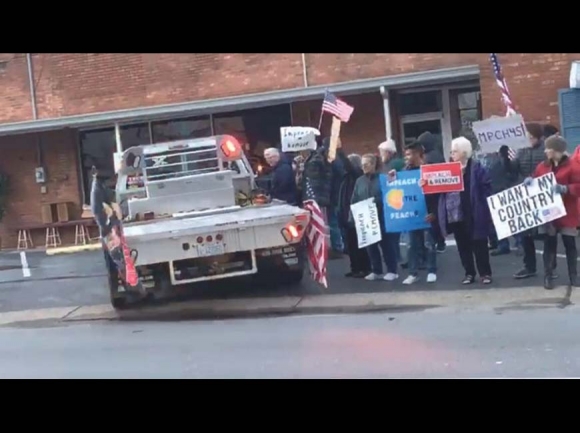 The Sylva Police Department is looking into an incident that occurred on Tuesday, Dec. 17, during a protest downtown that was part of a nationwide string of rallies calling for the impeachment of President Donald Trump.

More than 100 protesters were gathered in front of the Jackson County Democratic Party’s headquarters on Mill Street, said rally organizer Nilofer Couture, when a man driving a white pickup truck pulled into the parking lot where the protesters were standing and exited to wave a “big flag with a picture of Trump sort of like Rambo.”

“He was swearing at us and then he got onto the street and started trying to antagonize us and cause trouble,” said Couture, who is a member of the group Indivisible WNC and was also recently elected to a town council seat in the Village of Forest Hills.

Sylva police were on standby at the protest and responded promptly. Within about half an hour, the officer on duty had convinced the man to leave, said Couture, though he continued to circle the block afterward and make obscene hand gestures as he drove by.

Nobody has filed a specific report with the police department, and no charges have been filed, said Police Chief Chris Hatton. However, the department is taking the situation “very seriously” and Hatton is personally reviewing the videos and information his department has received to determine if any laws have been violated.

“This case is important to the Sylva Police Department because we want to make sure that everyone’s rights are protected and that everyone feels safe while in Sylva,” said Hatton. “This is the reason we were at the protest to begin with — we wanted everyone to feel safe. We have seen several terrible and sad incidents unfold in our country. Incidents that began much like this situation. Because of these horrible memories, a group of peaceful protesters were in fear that something terrible was about to happen. Thank God it wasn’t one of the situations we see on national news.”

However, said Hatton, it’s important to note that the incident is not what it’s been made out to be in some sectors of social media. While the counter-protester did pull his vehicle into a parking lot where people were protesting, he did not drive into a crowd with intent to injure the protestors, as has occurred in other parts of the country. There were no injuries.

“In the videos I’ve seen thus far, you can see the counter-protester’s vehicle stopped in the parking lot, blowing his horn at protesters to move out of his way,” Hatton said. “The counter-protester then parks his vehicle in a row of parking spaces. Then, he gets out of his vehicle and begins waving a Trump flag at traffic driving by until one of our officers pulls him away from the crowd.”

The officer on-scene was able to “quickly de-escalate the situation,” Hatton said.

Couture agreed with that assessment.

“I don’t think he meant to hurt anyone, but it was odd that you would want to park your car and move a bunch of people out of the way, so he was trying to get into the crowd,” she said.

Anyone with video of the incident is encouraged to send it to Hatton at This email address is being protected from spambots. You need JavaScript enabled to view it..