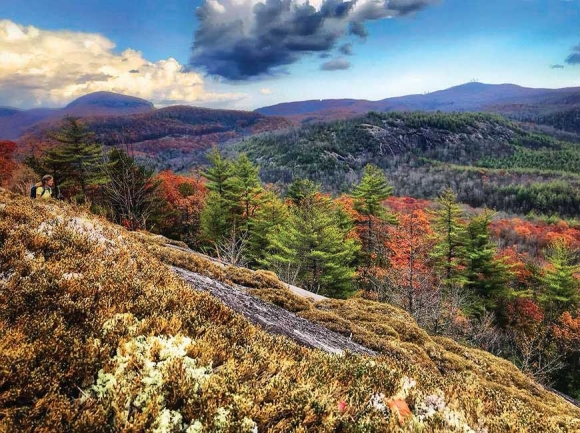 Little Green Mountain rises from the base of Panthertown Valley. Thomas Mabry photo

Panthertown Valley’s popularity is increasing, and advocates for the backcountry area — located near Cashiers in the Nantahala National Forest — hope its newfound designation as a Leave No Trace Hot Spot will help head off some of the less-than-pleasant effects of that popularity.

There’s no up-to-date visitation estimate for Panthertown, said Charly Aurelia, trail stewardship coordinator for Friends of Panthertown, but the last count put it at 25,000 visits per year.

“That use has been increasing over past years,” said Aurelia. “We just jointly helped create a parking area at the Salt Rock Gap entrance, and it’s full across the summer.”

Human-bear encounters are frequent, and hikers venturing off the official trails have over time peppered the 10,000-acre area with a network of user-created routes, said Aurelia. These impacts, coupled with the likelihood that more will follow as visitation continues to increase, drove Aurelia to nominate Panthertown as a Leave No Trace Hot Spot, and Panthertown was chosen as one of 14 areas accepted to the program this winter.

“We try to select a diverse array of places, whether it’s urban parks, city parks, big national parks or specific sites in national forests,” said Mitch Warnick, Leave No Trace In Every Park program manager with the Colorado-based Leave No Trace Center for Outdoor Ethics. “This one fit the bill in the more dispersed areas. It’s not a wilderness area, but it’s not near a major population center and there’s not a visitor center. It’s this dispersed national forest site that doesn’t have a lot of active management. Being on a national forest, there’s not a ton of staff dedicated to just that location.”

The Hot Spot program, launched in 2012, aims to identify areas that are in danger of being “loved to death” but can thrive again through improved observance of Leave No Trace principles. Leave No Trace advocates for responsible use of the outdoors through adherence to seven rules designed to ensure current visitors don’t take away from the experiences of future ones. Those principles are: plan ahead and prepare; travel and camp on durable surfaces; dispose of waste properly; leave what you find; minimize campfire impacts; respect wildlife; and be considerate of other visitors.

Getting the message out

Every year, traveling trainers with the Leave No Trace Center for Outdoor Ethics conduct 600 educational programs, but participants in the Hot Spot program receive a week of focused attention from one of these two-person teams. Panthertown will host the trainers during a five-day event Aug. 21-25, 2020.

However, the process will begin well before August, with planning starting in late winter. Leave No Trace will coordinate with various stakeholders to determine what impacts they most want to address and what their goals are for building up their stewardship efforts. During the actual event, the Leave No Trace trainers will begin with a tour of the area to get an on-the-ground sense of what issues are at play, followed by various community workshops aimed at spurring awareness of Leave No Trace principles and best practices for communicating those principles to Panthertown visitors.

“It’s trying to explain why. Why are these rules in place?” said Warnick. “What impacts do your actions have, and in particular trying to highlight in many of these places cumulative impacts. It sometimes takes an explanation for people to understand it may just be you walking off-trail in your mind, but if you and 100,000 other people do that, those interactions are going to add up.”

It’s incredibly helpful to future users for the stakeholders — in this case including Friends of Panthertown, the U.S. Forest Service, trail volunteers and tourism organizations, for starters — to have an opportunity to sit down together and decide on a unified, consistent message, said Warnick.

“If visitors do the research and go out on a hike and then they see a tourism organization saying this versus the agency saying that versus another friends group saying another thing that’s all inconsistent, that’s setting the visitor up for failure because they don’t know what’s right, and they may just ignore all of it,” said Warnick. 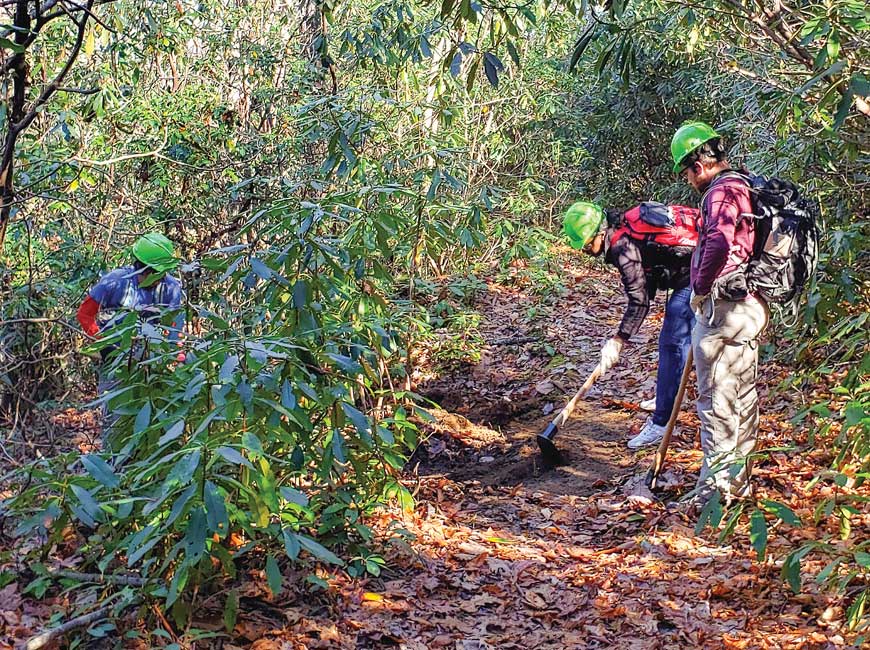 Trainers will work with stakeholders to ensure that doesn’t happen.

The event will also include service projects that aim to get community members out on the trails with stewardship groups, hopefully realizing how much work there is to do, why it’s important — and that it can be fun.

The week will conclude with a wrap-up meeting to debrief the event and talk about what comes next.

“We discuss what went well and why it went well, what could have been done better and why, and what the next steps are,” said Warnick. “We really try to get them to line out some short term, long term and midterm goals.”

The overall result should be deep integration of Leave No Trace principles into management decisions, volunteer programs and visitor programs, said Warnick.

Over the past eight years, Leave No Trace has conducted just under 100 Hot Spot programs in 35 states, including at Linville Gorge in 2015 and Ellicott Rock in 2019. Those programs have done a lot to improve the messaging and community buy-in surrounding Leave No Trace principles, said Warnick, and the mere process of hosting the trainers has been transformational as well.

“Consistent positive feedback from our Hot Spots over the years is a lot of community work, community understanding and growth has occurred just through hosting a Hot Spot, regardless of the individual recommendations or individual programs,” said Warnick. “That’s a pretty consistent theme.”

Aurelia, himself a Leave No Trace master educator, said he’s looking forward to the trainers’ visit in August but that Panthertown is already working on changes to help alleviate some of the issues it’s facing, especially regarding bears.

Panthertown is a black bear haven, designated by the N.C. Wildlife Resources Commission as part of the Panthertown-Bonas Defeat Bear Sanctuary. The large number of bears that live there, coupled with the increasing number of human visitors, has resulted in a significant number of bear encounters.

“We have bears that are learning, ‘This is where we get food,’” said Aurelia. “They’re learning and they’re passing it on to each generation.”

Nationwide, he said, bears are figuring out how to get into bags that are hung from a tree, the traditional way of keeping food safe. It’s not really working anymore.

The U.S. Forest Service “strongly recommends” that backcountry campers in Panthertown use bear-resistant canisters to store their food and carry a readily available can of bear spray, but not everyone follows those guidelines. Friends of Panthertown is currently working with Boy Scout Troop No. 701, in Brevard, on an Eagle Scout project to install a bear box in one of the areas that’s often used as a campsite and plans to have five such boxes installed by summertime.

“We’re already moving in that direction,” Aurelia said. “We’re already taking action to minimize impacts, but that relationship where the bears learn this is where we can come find food — we need to stop that connection.”