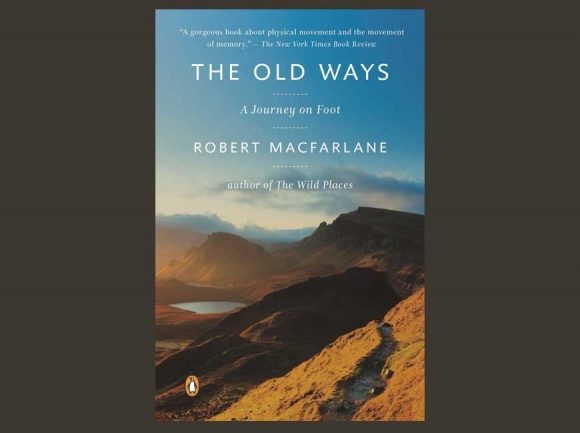 Growing up, one of my favorite books was H.G. Wells’ The Time Machine. In Robert MacFarlane’s The Old Ways, instead of taking us into the distant future, he takes us into the ancient past. He sets off to follow the ancient routes that crisscross both the British landscape and beyond — to the chalk downs of England to the bird islands of the Scottish northwest (and the ‘fells’ where he calls home), from Palestine to the sacred landscapes of Spain and the Himalayas that were traveled by people who only traveled on foot or in crude sailing vessels.

He takes us on foot to places where we are treated to first-hand and on-site details of the land and the landscapes where ancient peoples have trod, lived and fought. “Humans are animals and like all animals we leave tracks as we walk: signs of passage made in snow, sand, mud, grass, dew, earth or moss. The language of hunting has a luminous word for such mark-making: ‘foil.’ A creature’s ‘foil’ is its track. We easily forget that we are track-makers, though, because most of our journeys now occur on asphalt and concrete,” MacFarlane begins his book, and then goes on to propose: “For some time now it has seemed to me that the two questions we should ask of any strong landscape are these: firstly, what do I know when I am in this place that I can know nowhere else? And then, vainly, what does this place know of me that I cannot know of myself?”

MacFarlane’s Scottish brogue and cordial Celto-familiar and unselfconsciously lyrical language puts one in a mindset of being a native of the places and paths he ventures. “Through the action of water, a hairline crack over time therefore becomes a runnel, which becomes a fracture site, which becomes an escarpment edge,” he writes as we walk with him on an unplanned and spontaneous journey to the wadi hills and plains near Ramalla and the West Bank region of Palestine. Where, as he says, “the rain made the marly soil sticky as treacle and where everything here, including botany, is political.” Or as his Palestinian friend says, “I look forward to a time when the landscape of my own country has been demilitarized and we in Palestine are able to regard the artifacts of war as museum objects, rather than as live threats.” Here MacFarlane wanders with his friend Raja in what the Palestinian natives call a sarha, which loosely means “to wander,” but has a deeper meaning of being “a walking pilgrimage” and thus having connotations of sauntering or rambling while also connoting a more spiritual journey. He also takes us on a quick trip to Spain along the Camino de Santiago or the old pilgrim routes stretching across Europe and coming together on the old roads to Santiago, which has been the place of pilgrimages for centuries. But the main thrust of MacFarlane’s journeying is done in Great Britain and the histories and landscapes he knows by heart.

Knowing something “by heart” also means knowing it by word. And if MacFarlane is precocious at anything it is with words and language as indicated not only in this book but in his other books such as The Wild Places and The Lost Words. In The Old Ways we are introduced to a plethora of new words and phrases from the Scots language that flow like music from MacFarlane’s pen — including lines from well-known Scottish folk and gospel songs. “The blue islands are pullin’ me away/Their laughter puts the leap upon the lame;/The blue islands from the Skerries to the Lewis/Wi’ heather honey taste upon each name.” And there are descriptive phrases using words like ghillies, plunge-pots, stances, reavers, bindlestiffs, wildlings, wrack-lines, cairns, cloud cauls, waves moshed and milked, corries and caves ... “with history issuing from geography in the same way that water issues from a spring unpredictably but site-specifically.” In his section on the Outer Hebrides off the west coast of Scotland, he speaks of the water there as whalebacks and the small waves as swithered and the turbulent water as jabbly. “We think of paths as existing only on land, but the sea has it’s paths too,” MacFarlane says. Or as he explains and describes his experience of sailing a slight skiff in the Atlantic between the islands of Lewis to St Kilda: “All maritime cultures have lore about objects and substances that are thrown into the seas to calm them when a craft is in danger. Ale, oil or blood are poured overboard to soothe the waves. Coins, bodies, swords, screeds of wool of gansey are yielded to sate the maelstrom.”

This book is a geo-journey as well as a journey into poetic and descriptive language. And as a writer and one who has done his fair share of traveling that includes the mainland and the coastal regions of Scotland and Great Britain, I have relished my time on both these journeys on the old pathways with Robert MacFarlane. For those with an adventurous spirit, or those looking to expand their horizons of historical terra firma and a new Celto-European lingua franca, this book qualifies as a must-read. Or, as the well-known nature writer Rick Bass says in his endorsement for The Old Ways: “Luminous ... dreamlike ... hypervigilant. Each sentence can carry an astonishing discovery.”

Thomas Crowe is a regular contributor to Smoky Mountain News. He is the author of Driving the Green Road: Poems from Scotland, Ireland & Wales published in 2019 by Ghost Pony Press in Madison, Wisconsin. He lives in the Tuckasegee community in Jackson County and can be reached at This email address is being protected from spambots. You need JavaScript enabled to view it.