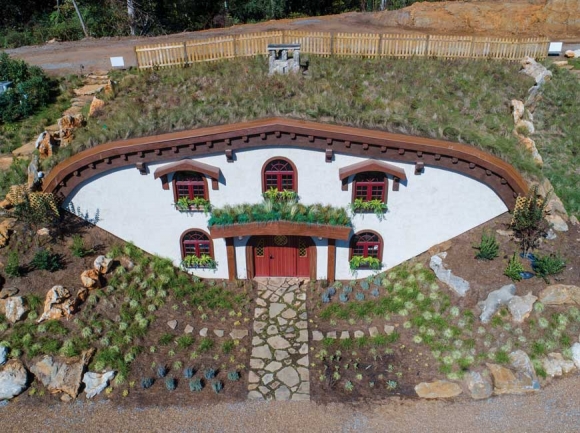 A prototype Bobbin house has been built on Ancient Lore Villages’ property in Knoxville, but the site will not be home to a full-blown resort. Donated photo

A $30 million deal to bring a story-themed resort to Eastern Band of Cherokee Indians-owned land in Sevier County, Tennessee, will not go forward following a unanimous vote from Tribal Council Dec. 5 to kill a resolution Principal Chief Richard Sneed submitted in October.

No discussion preceded the vote, but councilmembers made up their minds following a non-televised work session held at an earlier date.

“To me it was just a lot of money for something that has never been built before, and I don’t think the proper steps were taken,” said Councilmember Albert Rose, of Birdtown, during a Dec. 6 phone call.

Rose said that there were “a lot of unanswered questions” and that he did not feel councilmembers had received enough information to decide in favor of the investment.

“We felt like we were being misled on the information we were given,” added Councilmember Dike Sneed, of Painttown, also via phone. “So we had to look further into it. Some of the things we saw made us leery, so we chose to back away from it.”

Councilmember Sneed said that, because the conversation had occurred in closed session, he could not disclose the exact reasoning that led to council’s decision. However, he and Rose both said, there were concerns about the potential for an infringement lawsuit against Ancient Lore as well as about the large sum of money requested for the investment.

Chief Sneed, however, still believes the project would be a win for the tribe.

“I support the project and believe that it is an excellent investment opportunity,” Sneed said via text message.

Matt Cross, CEO of the company the tribe had hoped to work with — Ancient Lore Villages at Boyd Hollow — said he sympathized with council’s perspective.

“I can support Tribal Council’s decision because they were acting with such limited information,” he said during a phone interview. “We have an NDA (non-disclosure agreement) with Kituwah LLC. That’s who we had provided some of our information, but candidly we’re talking to a bunch of different entities and we only recently got independent analysis for what our resort development would look like using (the tribe’s) location. That information was not available to Tribal Council.”

Ancient Lore Village’s original concept called for a $40 million resort in southern Knoxville that would include more than 150 period homes and treehouses, a 150-seat restaurant, a 500-person meeting and event center, and a 1,000-seat outdoor amphitheater, all based on founder Tom Boyd’s debut fantasy novel The Bobbins — Outcast to the Inner Earth.

Since then the plans have evolved, with the latest concept described as a $74 million project employing more than 200 full-time positions for at least $15 per hour and holding up to 550 guests. Instead of revolving around The Bobbins, the development is now billed as a “story resort” capable of incorporating different themes for any given location.

“Our theme is now storytelling itself — and we are allowed with a destination resort model to absorb and reflect new theme concepts as we expand,” Cross said. “Our locations will combine literal, mythical, regional and folklore components into a blend that can feel both familiar and fantastic to guests.”

The company hopes to develop several such resorts in the coming years. However, the inaugural location will not be in Knoxville as originally planned.

Ancient Lore Villages recently pulled its plan development filing, which sought to pave the way for the resort’s development. The proposal has been controversial in South Knoxville, drawing backlash from residents opposed to Ancient Lore Village’s location in the otherwise agricultural and residential community.

“As our concept and as our team grew and as we added amenities and pieces of the development to ensure its viability and mass market appeal, we reached a point where we had outgrown what Knox County could support,” said Cross.

Ancient Lore plans to retain its 70 acres in Knoxville — just not as a resort. It could house Airbnb dwellings in addition to an already-complete luxury villa and also serve as a wedding venue, Cross said. The company is currently “exploring opportunities” for places to build the first resort, talking with potential partners in Tennessee and at least three other states, Cross said.

While Tribal Council has nixed the current proposal to collaborate with Ancient Lore Villages, it is possible the entities could still work together in the future, with Cross, Councilmember Sneed and Rose all expressing interest during interviews with The Smoky Mountain News in creating a smaller, Cherokee-themed resort on the Qualla Boundary should the storytelling concept first prove successful at other locations.

Ancient Lore has been generating some enthusiasm within the theme park industry, named as one of the top five announcements to come out of the recent International Association of Amusement Parks and Attractions Conference in Orlando, an event at which more than 1,000 companies made announcements.

Chief Sneed said he plans to continue discussing the possibility of partnership with Kituwah LLC, stating that he has asked the LLC board to review and evaluate Ancient Lore’s pro forma and give an evaluation.

“I could submit a future resolution related to the project with different parameters for the Eastern Band’s involvement,” he said. “Whether or not that happens will be determined by the information I receive from the LLC board.”