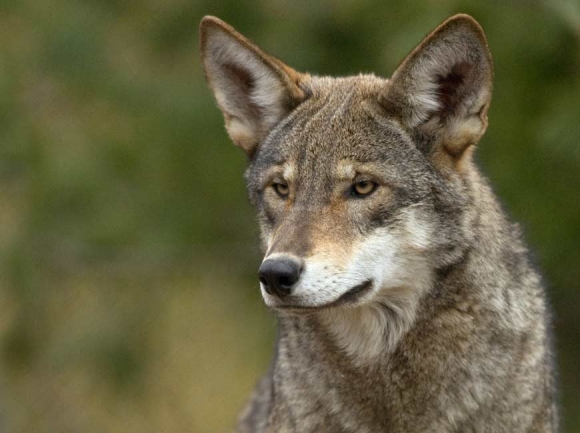 Between coyotes and gray wolves in size, red wolves measure about 26 inches at the shoulder and weigh between 50 and 80 pounds. Monty Sloan photo

“I was just kind of blown away, because I had not really heard of the red wolf before,” said Lile, who grew up in Haywood County. “I was from this state and didn’t know there was a wolf species living in it.”

Lile was also fascinated by the red wolf’s story.

Habitat loss, conflicts with humans and hybridization with coyotes had nearly caused the red wolf’s extinction before efforts were made to reintroduce it. It was declared extinct by 1980, with 400 individuals pulled from the wild. Of those, only 17 were judged to be pure red wolves rather than coyote hybrids, and of the 17 only 14 were used in a captive breeding program that eventually resulted in a 1987 reintroduction to the Alligator River area of Eastern North Carolina.

The effort was successful, with the red wolf population eventually reaching a peak of 150 individuals. The animal once ranged across the entire Southeastern U.S., from eastern Texas down into Florida and all the way up into Pennsylvania, so in 1991 the U.S. Fish and Wildlife Service attempted another reintroduction, this time in the Great Smoky Mountains National Park. That effort did not end well.

“They were having reproduction problems,” said Lile. “They weren’t able to find enough food.”

So, they came down out of the mountains onto flatter land, where the hunting is easier but the potential for conflicts with humans is greater. It’s possible that flat ground is the red wolf’s preferred habitat, but nobody knew for sure — before the reintroduction, no red wolves had been reported in Haywood County since the early 1900s, a gap of nearly 100 years.

“They ended up transferring most of those red wolves to the eastern side of North Carolina or back into captivity,” said Lile.

Today, the world’s only wild population of red wolves exists in a five-county area of Eastern North Carolina, and that population is in trouble. From the peak of 150 individuals, the wild population has dropped down to fewer than 20, though an additional 220 red wolves still live in captivity.

The red wolf’s plight struck a chord with Lile.

“I hadn’t even heard of the red wolf and known what was going on until my senior year of college after living in North Carolina my whole life and being a wildlife advocate for other species,” he said. “I just really wanted to raise that awareness with other people who may not have heard of the red wolf.”

Lile began working with Defenders of Wildlife on letter writing campaigns and messaging surrounding the red wolf’s plight. He’s been doing that for the past two years while also traveling all over the world to gain first-hand experience in wildlife conservation. He’s done wildlife-related work in Madagascar, Tanzania and at Wolf Park in Indiana, where he was recently hired as program coordinator. Lile continues his work for Defenders, dividing his time between Waynesville and Indiana — and over the coming months, he has a slate of red wolf events planned for his home region.

“Everything in wildlife and nature is very interconnected, and if you remove one piece it’s very damaging to the rest of the ecosystem, but wolves in particular are a crucial piece in the ecosystem to keeping everything else in check,” he said.

Red wolves outcompete coyotes and foxes. Unlike those species, they don’t eat ground-nesting birds, so those birds do better when wolves are around, Lile said. Wolves also cull the weak and sick animals from their prey populations and enjoy eating nutria, an invasive South American rodent that flourishes in eastern North Carolina.

“There’s not necessarily a whole lot of conflict in terms of they weren’t ever going after people’s pets, there’s never been a report of a red wolf attacking a human, nothing like that,” said Lile. “The conflict really lay in people’s perceptions of red wolves.”

That’s the common position of wildlife biologists and wildlife advocates, but not necessarily of the people who have red wolves as their neighbors.

“They and their friends the coyotes are only detrimental to the habitat,” wrote Dare County resident Ross Riley in public comments to the Fish and Wildlife Service. “The quail are rare now, rabbits are rare and the spotted fawn survival rate is very low. We don’t see herds of deer any more. The deer remaining are largely nocturnal. Turkeys are not able to expand their territory.” 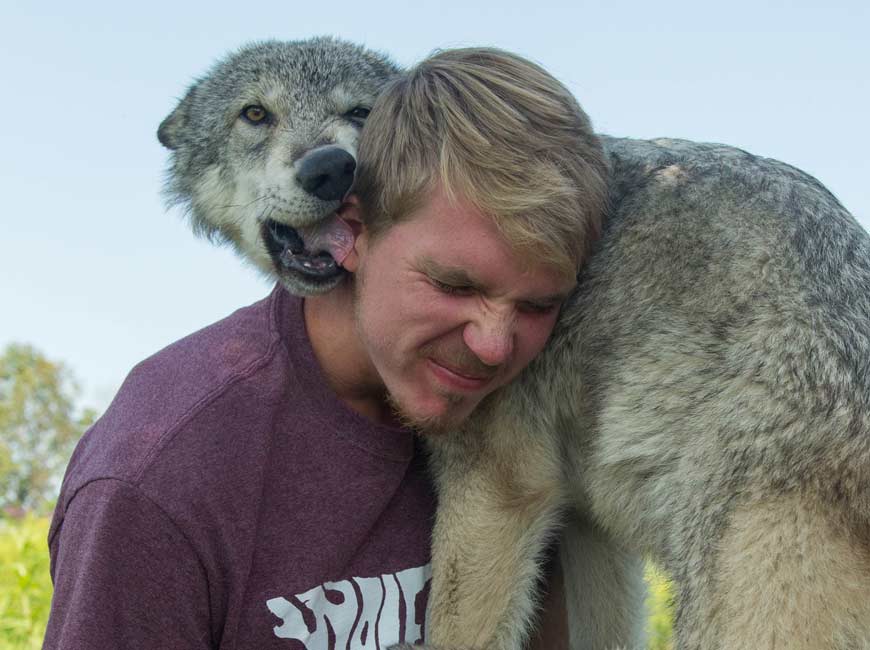 Christopher Lile spends time with some of the grey wolves at Wolf Park in Indiana.

Due to the fragile and limited nature of the red wolf population, there is little research specific to the red wolf, said Lile. However, when red wolf numbers were at their pea, deer populations seemed to stay about the same as they had historically. Research on gray wolves out west shows that the predators’ presence affects the behavior of their prey animals.

“With wolves in the ecosystem, prey (such as deer) move around more and act like historic ungulates, not meadow potatoes, which influences their fitness in a positive way and exposes the sick and weak to predation,” Lile said. “This in turn helps prevent overgrazing, which has a ripple effect on the rest of the ecosystem.”

“We have unlimited bears, the greatest bear density in North America. We have coyotes that are multiplying like rats. We should have our alligator population open for cull. We don’t need another apex predator,” Riley wrote. “Our local habitat should not be fodder for your ‘experiment.’ We live here, you’ll just transfer to your next ‘opportunity’ and we’ll be stuck forever with your poor choices.”

Riley wrote his comments in response to a Fish and Wildlife Service proposal to drastically cut back on protections and management of the red wolf population. First published June 28, 2018, the proposed rule would stop management of red wolves living on private lands and restrict conservation efforts to certain public lands in Hyde and Dare counties. Outside those public lands, red wolves could be killed with no hunting restrictions.

The federal ruling came after years of conflict between the Fish and Wildlife Service and environmental groups, with those groups bringing a 2012 lawsuit against the government arguing against allowing nighttime hunting of coyotes in the reintroduction area, because red wolves can easily be mistaken for coyotes in the dark. In 2014 the groups came to an agreement that involved cessation of nighttime coyote hunting those five counties. In 2016, the Fish and Wildlife Service suspended reintroduction efforts supporting the existing wild population.

While some comments criticized the red wolf’s presence in Eastern North Carolina, most expressed pro-red wolf sentiment. According to an analysis from the Wildlands Network, Wolf Conservation Center, Center for Biological Diversity, Defenders of Wildlife and Animal Welfare Institute, the proposed rule drew 108,124 comments, of which 99.9 percent favored stronger federal protections for red wolves.

“Ideally you would not have just one wild population of red wolves,” he said. “That’s extremely dangerous because if a hurricane comes through Eastern North Carolina and wipes out all the red wolf populations in the wild, you have no red wolves left.”

Defenders of Wildlife would like to see new pockets of red wolf populations eventually established throughout its historic range. But the North Carolina program’s success will be critical to achieving that end.

“To even think about releasing wolves in those areas before North Carolina wolves are taken care of is a little bit ridiculous,” said Liles. “It’s just getting ahead of ourselves and it’s allowing North Carolina to give up on our population, which then is going to make other states not want to have red wolf populations. Because if North Carolina can’t do it after 35 years and a lot of money invested into that project, why would other states think it’s going to be successful there?”

With that in mind, Lile is looking to rally North Carolinians around their native wolf, in March organizing the first annual Concert for Conservation, held at the First United Methodist Church of Waynesville and featuring a variety of local musicians. The free concert took up a love offering to support red wolf conservation efforts and ended up raising $6,000.

His original vision was to use the concert to benefit a different species each year. But the response was so positive and the red wolf’s need so great that he decided to feature the red wolf for a second year. The second annual Concert for Conservation is slated for 4 p.m. Sunday, March 29, 2020, once more at FUMC, and Lile is planning multiple other red wolf-related events in Haywood and Buncombe counties leading up to the event.

“After going across the sea to Tanzania and Madagascar to study primates, I kept realizing every time I came back to North Carolina that I didn’t have to travel very far to try to educate people or protect a critically endangered species,” said Lile. “If we can’t protect a critically endangered species from extinction in North Carolina or the United States, how are we going to do it in Madagascar or Tanzania?”

A lineup of events over the coming month will give Western North Carolina residents the chance to learn more about the red wolf’s plight and to take a hand in supporting the animal’s recovery.

• Read for the Red Wolf: Blue Ridge Books in Hazelwood is currently hosting an informational display about the red wolf, with books about the animal for sale as well. The display will remain through Nov. 29.

• Tea Time to Save the Red Wolf: Guests will enjoy an afternoon tea and buffet while learning about the red wolf, with sessions at 10:30 and 11:30 a.m. at Nettie’s Bakery in Hazelwood. A limited number of tickets is available for $20, with proceeds benefiting on-the-ground conservation work. Purchase tickets from Nettie’s Bakery.

• Red wolf art exhibit: Details on this art show are forthcoming, but it will be held the spring.

• Concert for Conservation: Inspiring music and engaging presentations will be offered at 4 p.m. Sunday, March 29, at First United Methodist Church Waynesville. Donations are welcome and will be used to advance red wolf conservation.