The Naturalist's Corner: The A, B, C and Ds of chickadees 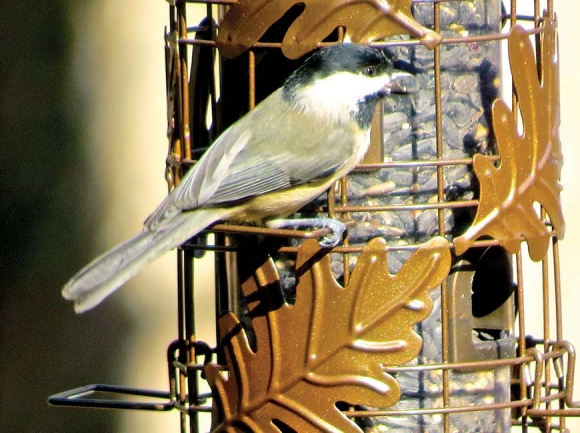 These common backyard feeders apparently have a lot to say. Don Hendershot photo

One of the things all chickadees have in common is they talk a lot. Chris Templeton and co-authors from the University of Washington published a paper back in 2005 noting they had recorded more than 500 “chick-a-dee” calls. This particular study was done in a raptor rehabilitation center using black-capped chickadees. Researchers found the birds responded with different calls (words?) depending on what raptors were around and how close they were. Small dangerous predators like sharp-shinned hawks elicited more and more excited “dees” than say a large predator like a bald eagle.

Dr. Christopher Sturdy, a Canadian researcher said in the Canadian Journal of Zoology chickadee calls were an “avian language.” He said the notes were analogous to “phonemes” (the smallest component of human words.) According to Sturdy, a call would be like a human word and a series of calls would be comparable to a human sentence.

Researchers believe this chickadee language may have evolved because of the social nature of chickadees. After nesting season chickadees band together in small social groups of between two and eight birds, traveling and foraging together. Chickadee language is a way for these bands to communicate with one another.

Dr. Todd Freeberg of University of Tennessee has studied chickadee calls and believes the similarities between chickadee talk and human talk is obvious. According to Freeberg, chickadees are able to differentiate between seven different known note types and can add complexity and impetus by repeating notes several times.

Freeberg also thinks there’s a bit of grammar accompanying chickadee language. A and C notes are always placed at the beginning of the call (sentence) and D notes are found at the end. And this order or linguistic axiom is ignored less than 0.4 percent of the time.

Freeberg also believes chickadees have regional dialects. This is not a new concept to birders. It is widely recognized, more northern ovenbirds have a distinctive two-syllable song — “teach–er!” while our ovenbirds seem to mange only a loud “teach.” Freeberg studied and recorded flocks of chickadees in Tennessee and Indiana and found the common “D” note of Tennessee chickadees was basically absent in Indiana.

While this research (chickadees) is just budding, when you look across the spectrum at other creatures like dolphins, whales etc – and the communication research being done it’s not too farfetched to think all creatures talk to each other.

If you’re a birder, a backyard feeder, hiker or just someone in tune with nature, next time you’re out, listen and see if you can understand what the chickadees are saying.