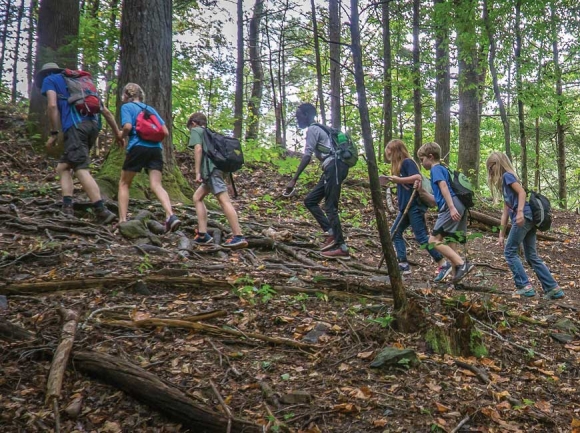 A group of Tennessee fifth-graders walks through the woods. David Bryant photo

“It’s a big project and we don’t want to rush it,” said Caleb Carlton, development manager at Tremont. “We are focused on doing this in a way that really reflects our organization, our mission, and we want to be as inclusive as possible in engaging the communities we serve and making sure this campus is in line with their needs and values.”

The nonprofit recently purchased 194 acres in Townsend, Tennessee, and has completed an initial master plan for the site, which is adjacent to the park. The project is preliminary, with no cost estimate or target timeline as of yet — but there is a vision for what it might one day become.

Tremont’s existing campus is mostly used for youth programming — the dormitory setup isn’t conducive to adult-centric events — but the new campus will be better equipped to handle adult groups. The buildings will be adaptive, too, with smaller dormitory units that can work as single-unit housing options or open up to serve larger groups.

“We have a very aspirational vision for that campus,” said Carlton. “We are looking to develop the entire campus to the standards of the Living Building Challenge.”

Billed as the world’s most rigorous proven performance standard for buildings, the Living Building Challenge’s requirements include that a site produce more power than it uses, that wastewater be treated on site with as much recycling and reuse as possible, that the project design be inspired by nature and that no toxic chemicals or building materials be used.

“We’re starting out by saying, ‘We want to walk the walk of our mission,’” said Carlton.

That mission goes all the way back to 1969, when Tremont’s campus welcomed its first groups of schoolchildren.

The campus was originally built as the Tremont Job Corps Conservation Center, part of a Johnson-era effort to help at-risk young people get the education and job training they would need to succeed as adults. It didn’t operate long in that capacity — the Job Corps Center opened in December 1965 and closed in 1969 after President Richard Nixon closed nearly 60 such centers nationwide.

“You basically had this campus that was all of a sudden empty in the national park, so very restricted uses for what it could become,” said Carlton. “Maryville College was the first group to take on this site and create the Tremont Environmental Education Center.”

That center opened in 1969, immediately beginning to host school groups in the dorms and use the kitchen to cook full-service meals. The program ran through 1979, when major infrastructure needs prompted the college to halt operations. The campus reopened in 1980 under the auspices of the Great Smoky Mountains Association, then called the Great Smoky Mountains Natural History Association. Another closure between 1982 and 1984 allowed for further infrastructure repairs and upgrades, and in 1984 the center opened once more, with Ken Voorhis hired as its director. It received its current name, Great Smoky Mountains Institute at Tremont, in 1986.

Voorhis remained in the executive director position through 2014, seeing the organization through decades of change that included its 2001 shift to a private nonprofit, independent of the GSMA or any other entity. Tremont’s current director is Catey Terry, who has been on the job since September 2018. 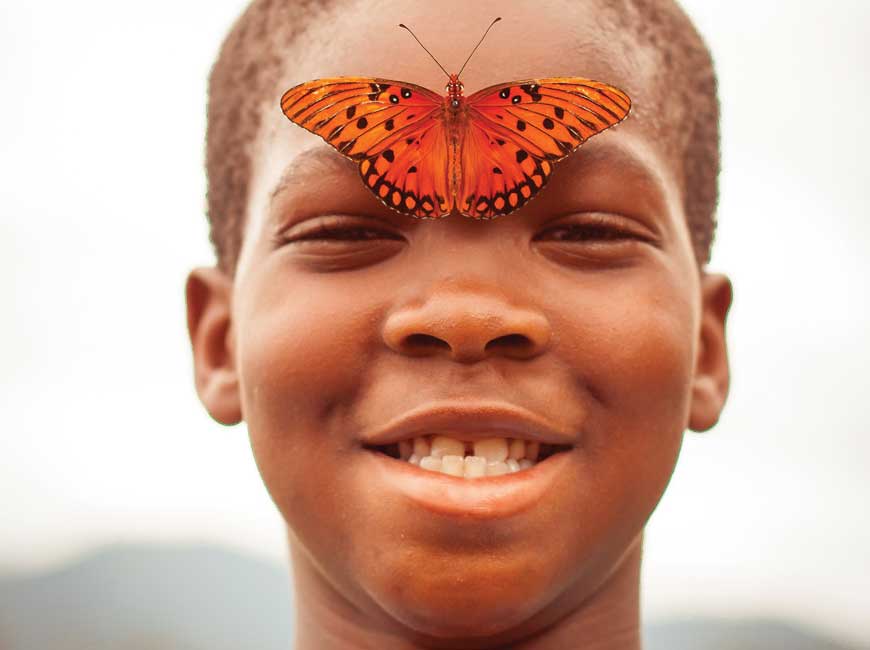 While monarch tagging is one of Tremont’s biggest citizen science projects, participants often get up close with other butterfly and moth species as well, such as this fritillary. Stephanie Bowling photo

“In some ways it hasn’t changed,” Carlton said of Tremont. “In some ways what we do is the exact same thing that we did 50 years ago, in that what we do is bring people to the park for residential experiences. Whereas the Park Service has the capacity to do half-day and whole-day education programs in the park, they rely on us to bring people deeper into the experience.”

Most of Tremont’s school programming lasts between three and five days, with some adult and summer camp programs lasting up to 10 days. For the duration of the program, participants live and learn in park boundaries, away from cell phone signal and other modern distractions. In recent years, Tremont has moved to an open investigative model in which small groups of students work together to come up with a research question, gather data and give a presentation on what they’ve learned.

“It’s all experiential. It’s all hands-on,” said Carlton. “We’re out in the park, on the trails, in the streams, studying ecology and biology and other subjects in that hands-on manner.”

Students walk away with more than an enlivened appreciation for science, however. The extended time with classmates and teachers, immersed in a shared experience, is a powerful outcome.

By the end of the week, students see their teachers as real people with genuine passions and interests. They see them struggle — and persevere — to conquer an 8-mile hike, and as the week progresses the group’s collective sense of trust expands. Classroom teachers report that the bond continues through the rest of the school year, Carlton said.

“The long term goal that we have for every participant is just to show them that learning is something deeply personal — at least it can be — and we want everyone to feel like they have the tools and the skills to be a lifelong learner and explore the world around them,” said Carlton. 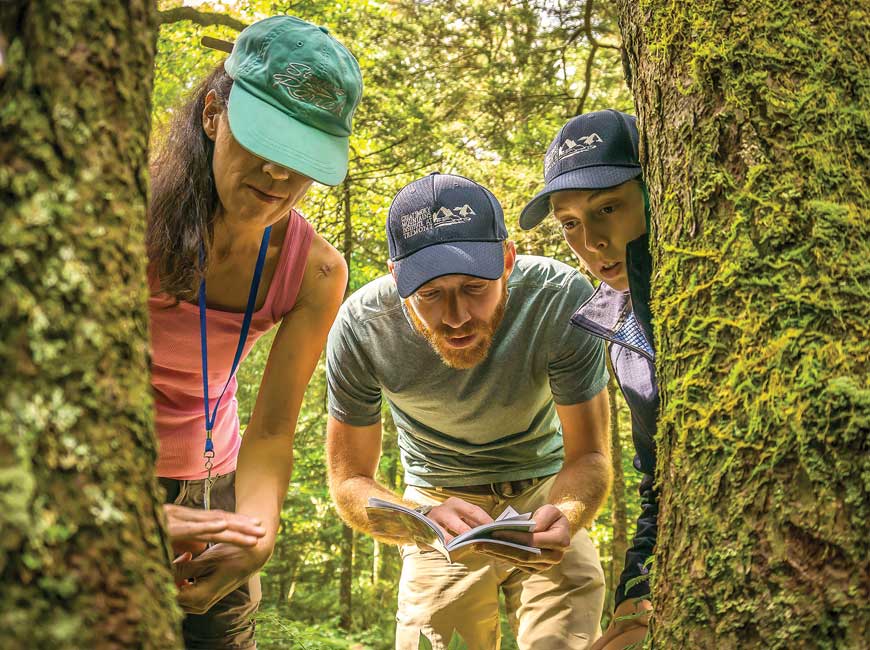 Since 1969, Tremont has served an estimated 250,000 program participants who have spent about 1 million days in the park. Currently, the nonprofit hosts about 6,000 participants per year from more than 10 states. In 2018, 4,600 of those participants were students representing 90 schools, and the remaining guests were adults. Last year was an outlier in the number of states represented, with 38.

While much of its focus is on youth programs for fifth- through 12th -grade school groups, other programs rely on adult participation. Tremont has its own research portfolio that investigates various topics related to the biology and ecology of the national park land where it’s located. For the past five to 10 years, that research portfolio has focused on citizen science — or, as Tremont terms it, ‘community science’ — which is a volunteer-driven form of research.

“We see it as a great way for local communities to get engaged and involved in genuine scientific research and data collection here in the park,” said Carlton.

Tremont’s citizen science volunteers make regular trips to the park to gather data on everything from salamander populations to bloom dates for trees. Many of the projects their data supports will ultimately span decades, creating valuable databases for scientists to draw from.

As Tremont turns its eye to the next 50 years of science education and research, and to the upcoming development of its second campus, it hopes to see all ages and educational levels continue to benefit from the service it provides.

As it celebrates its 50th year and gears up to develop a second campus, the Great Smoky Mountains Institute at Tremont hopes to see strong financial support during this year’s Giving Tuesday, slated for Dec. 3. Donate or learn more at www.gsmit.org/givingtuesday.

• 1938: Walker Valley supplies the last load of logs removed from the national park.

• 1969-1979: Maryville College operates the Tremont Environmental Education Center in cooperation with the National Park Service, with Lloyd Foster as its first director.

• 1978-1980: Old dormitories are removed, the entrance bridge repaired, a vocational building converted to a dormitory and classrooms added to the gym’s upstairs.

• 1986: Center is renamed to Great Smoky Mountains Institute at Tremont.

• 2014: Voorhis retires, with Jennifer Jones hired as president and CEO.