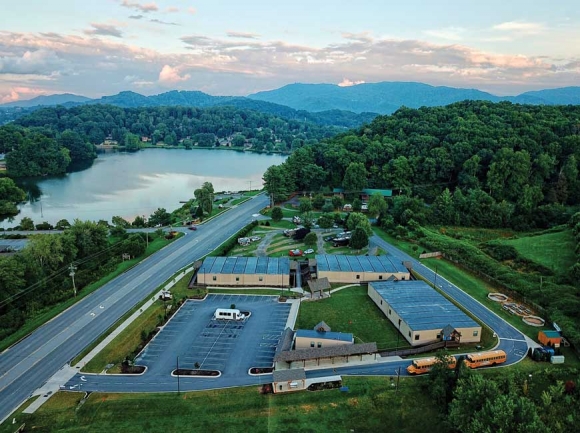 A consultant with the North Carolina Office of Charter Schools recommended that Shining Rock Classical Academy’s charter should be renewed for five years despite ongoing concerns about the school’s lack of transparency, and the state’s director of charter schools has refused to answer why.

As a taxpayer-funded public charter school, Shining Rock Classical Academy’s permission to operate in Haywood County is subject to periodic renewal, based on a rubric that’s available online and clearly outlines how those determinations are to be made.

The maximum renewal period is 10 years, and based on the rubric schools must have no current significant compliance issues, financially sound audits for the last three years and academic outcomes comparable to local school administrative units.

A seven-year renewal requires no significant compliance issues for the past two years, financially sound audits for the last two years, and academic outcomes comparable to local school administrative units in two of the last three years.

Shining Rock clearly doesn’t qualify for either of those, based solely on the school’s prior history of poor academic performance.

Perplexingly, the rubric (www.ncpublicschools.org/charterschools/renewals/framework) doesn’t even include guidelines for a five-year renewal.

That might be appropriate for Shining Rock given the school’s unexpected boost in academic scores last year, and also given the lack of complaints over the school’s finances — except that the school has demonstrated a current and persistent pattern of non-compliance with sunshine laws and public records statutes since before it even opened its doors in 2015.

In fact, the rubric suggests “no renewal” is the appropriate course for schools with a current and persistent pattern of compliance issues.

Back in August, The Smoky Mountain news contacted Shaunda Cooper, a consultant with the N.C. Department of Education’s Charter School office. When informed of Shining Rock’s consistent pattern of law breaking and asked if that would count toward the school’s renewal application, she said, “Everything counts. It really comes down to, has a law been violated or anything that is supposed to happen by statute or by law or rule?”

In 2015, the school violated closed-session laws pertaining to property acquisition before it even opened to students.

In 2017, the school violated public meeting notice requirements by sending out notice of a special called meeting less than 48 hours prior to the meeting’s commencement, in violation of state law. During that hastily-called Sunday night meeting, founding Head of School Ben Butler resigned.

Earlier this year, in June, the school again violated public meeting notice requirements by not sending out the required notice of an upcoming meeting at which board’s grievance committee dismissed multiple allegations of improper disciplinary procedures by the school’s then-interim head, Joshua Morgan.

The school’s attorney, David Hostetler, later admitted to the violation but the parents who filed the grievances weren’t informed of the meeting until after it was over.

This past August, the school held an illegal closed session for a purpose not recognized by N.C. law.

That same month, Head of School Joshua Morgan met with publishers of Haywood County’s two largest newspapers to discuss Shining Rock’s repeated violations of state law and to ask for a “reset” in relations while also revealing that the board would “suspend” operations until they could receive transparency training from the same attorney who was supposed to keep the school out of trouble in the first place.

A month later, the board held another illegal meeting for which proper notice wasn’t sent out — remarkable only for the fact that the meeting was intended to serve as an educational seminar on following transparency laws. Only about half of the board showed up for the meeting.

“I think an illegal meeting is serious too,” Cooper told SMN back in August. “Let’s not undercut the severity of that because part of being a charter is having the trust of your community and to hear of things like that happening, that has an underlying current as well because you have to have the trust of your community for your school to flourish. That’s kind of how charters work. It does matter if meetings are being held when they shouldn’t be or if they’re not being held properly so that the public has an adequate opportunity. That’s an issue.”

Finally, on Oct. 11, Director of the Office of Charter Schools Dave Machado responded with a one-line reply that didn’t answer the question but did echo what Cooper told SMN back in August — “All aspects of a charter school are taken into consideration during the renewal process.”

That same day, SMN reiterated the question of how, exactly, evidence of Shining Rock’s law breaking would be presented within its charter renewal application. Machado didn’t respond, so a follow-up email was sent Nov. 1.

“I answered you [sic] question concerning Shinning [sic] Rock,” Machado wrote three days later. “The recommendation about the length of school renewals is made by the Charter School Advisory Board (CSAB) to the State board of Education (SBE). The ultimate decision is made by the SBE.”

That same day, SMN again asked Machado for tangible proof that Shining Rock’s history of law breaking would be presented within its charter renewal application. Machado didn’t respond, so a follow-up email was sent Nov. 18. As of press time no response had been received.

A story in The Mountaineer last week, however, shows a one-page document presented by Shining Rock to the Charter School Advisory Board listing its accomplishments. Under “Board training and public transparency” it says the school “became aware of stakeholder concerns involving transparency; immediately an improvement plan was developed and implemented.”

It also states that the board participated in the three-hour transparency training held during that illegal meeting in September, but fails to mention that half of the board did not attend.

The document also fails to mention an ongoing dispute over the release of public records by the school; at least a dozen public records requests made by SMN relating to how Shining Rock spends taxpayer money have gone unanswered for more than three months now.

After months of foot-dragging on the requests, Shining Rock then sent SMN a bill for more than $1,500 in fees before any work would commence on the public records requests. The problem? Those fees are far in excess of what state law permits.

Open government expert Frayda Bluestein, the David M. Lawrence Distinguished Professor of Public Law and Government at the University of North Carolina’s School of Government, also pointed out major problems with Shining Rock’s attempt to block the release of the records.

Even after the release by SMN of a story outlining the illegality of the proposed fees, Shining Rock has refused subsequent requests for the documents.

No mention of the illegal fees or of the potential lawsuit made it into the document Shining Rock presented to the Charter School Advisory Board.

The State Board of Education still has to approve the consultant’s five-year charter renewal recommendation before it’s finalized, probably in January.