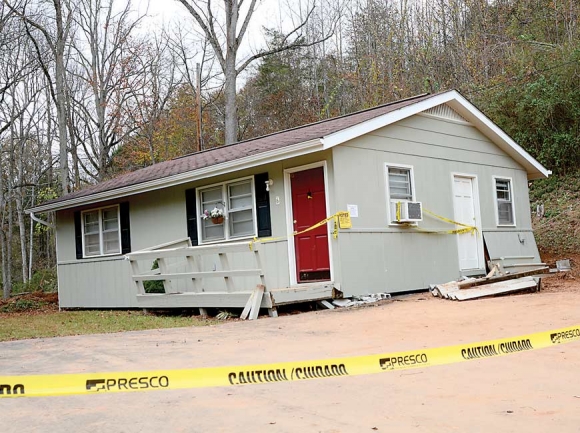 One of the 12 houses at Catamount Homes has been condemned following an Oct. 31 landslide resulting from construction at the WCU Millennial Apartments project. Holly Kays photo

By 7 a.m., property owner Sherri Deitz had already submitted her first complaint to the Jackson County Permitting and Code Enforcement Department, alleging that runoff from the Western Carolina University Millennial Apartments construction site was washing into the 12 small houses she owns at the base of the slope. At 11 a.m., heavy rain spurred Deitz to file a second complaint, but neither the rain nor the mud let up. That afternoon, a piece of earth detached from the slope and slid downhill to knock into one of the houses, with Jackson County 911 receiving a call from the property at 2:47 p.m.

“The house just got knocked off the foundation,” the male caller says on the tape. “There’s electricity still hooked into it. I’m not sure if the kids are here or not. There’s a mudslide that happened here.”

It turned out that nobody was home — it was the middle of the day, and most of the residents were at class or work or some other activity.

“No one was here, but this was from two days’ worth of rain, so this could have been at night and all of us could have been here,” said a 21-year-old junior who lives in the development. “What makes me nervous is we got a lot of rain here, so if that happened with two days of rain, what could happen with three or four days of rain?”

In the aftermath of the landslide, the house that got knocked from its foundation was condemned, and five additional buildings were evacuated. Deitz, who has owned the buildings for about 40 years, said that thus far she’s borne all the cost of dealing with the runoff issues herself and doesn’t know how much it may ultimately cost her.

“Right now the real concern is getting these kids back in and getting them settled and making them feel like they’re safe,” she said.

While the landslide was frightening, it wasn’t necessarily surprising. Deitz said she’d been dealing with erosion issues since April, with the official record prior to Oct. 31 beginning June 5 and containing three notices of violation from the state, two complaints from Deitz and eight calls or emails from the county to the state reporting sediment issues. In fact, another, smaller landslide had occurred on the property less than two weeks earlier, Oct. 21.

The construction is taking place on property owned by the WCU Endowment Fund, but it’s not a WCU project per say. The planned development, which will result in a 500-bed student housing complex, is being built by Wilmington-based Zimmer Development Company as part of a public-private partnership to increase student housing inventory. Zimmer is building the housing and will operate it through a long-term ground lease — 40 years, with the option to renew for another 10 years.

Because the project is being built on WCU property, permitting and inspections are handled mainly by the state, not the county. 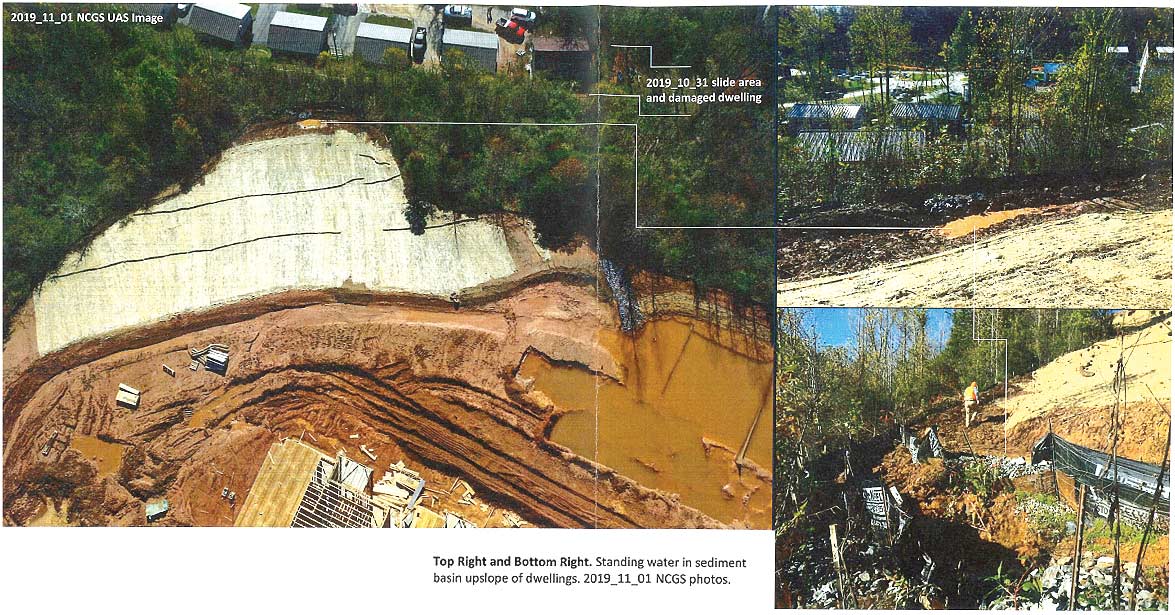 “We had a large event that overwhelmed our system and caused some issues downslope, and we’ve been working really hard to correct those,” said Adam Tucker, Zimmer’s director of development. “We’ve been shoring up our measures and adding measures and making sure it doesn’t happen again. It’s been unfortunate, but we’re truly doing everything we can.”

Based on comments made at a special-called meeting Nov. 7 to discuss the issue, it’s likely that some county commissioners would be skeptical of such promises.

“I get tired of hearing that there are these plans made for a 100-year event and a 50-year event,” said Commissioner Gayle Woody. “We live in the mountains. In 1940, that event took out all the bridges in Jackson County but one. We have got to look at what possibly could happen and how do we protect our land, water and citizens in Jackson County. And I don’t want to hear these excuses — ‘Oh, it was a big rain event.’ I’m 67 years old. I can tell you about lots of big rain events, and it’s not fair to our citizens and our water and our soil to not make plans that will address the most severe.”

Zimmer received its first notice of violation on June 17 from the state’s land quality division, with another notice from the water quality division sent June 19. The land quality violation was lifted on July 12, though the water quality violation remained in place — water violations typically take longer to remedy than land violations. However, the project attracted a new notice of violation from the water division on July 31. The notice letter stated that Zimmer had violated the state’s turbidity standard, which is set at 50 nephelometric turbidity units. Of the 11 samples taken during the state’s inspection, only three fell under the limit, with the highest measurement coming in at 1,000 NTUs — 20 times the limit.

Following the Oct. 31 landslide, the water quality division issued yet another notice of violation. Turbidity levels continued to violate the state standard, and sediment as deep as 9 inches had settled in Long Branch, the notice said. According to Christy Simmons of the Division of Energy, Mineral and Land Resources, staff inspected the construction site on Friday, Nov. 1, and found it to be out of compliance with both the Sediment Pollution Control Act of 1973 and its construction stormwater permit. The results of that inspection are still being compiled into written form, said Simmons.

“It appears that water quality has repeatedly issued notices of violation over the course of the last several months,” said Chairman Brian McMahan. “It’s land quality that has been dragging their feet as far as issuing violations, so I would be interested in reaching out to the state for an explanation.”

In answer to questions from commissioners about why the actions Zimmer took to address these earlier erosion problems didn’t prevent the Oct. 31 landslide, County Manager Don Adams said there could be a variety of explanations.

According to comments from Zimmer relayed by WCU Vice Chancellor for Administration and Finance  Mike Byers in an Oct. 22 email to Woody, silt fencing had been in place since the project began, with additional rows installed after the violation issued in June. In August, the company wrote, a large volume of water ran over the top of the silt fence due to the fact that the water flowed faster than the fence’s ability to filter it. A row of mulch was added afterward to aid the effort and the slope was seeded to establish permanent stabilization, with coir baffles installed as well. However, Zimmer said, the amount of rain received over the weekend of Oct. 19 served only to wash away the seeds. Once again, runoff from the site overwhelmed the silt fences to reach the houses below.

“In order to mitigate this from occurring again, the site contractor has retrenched the diversion ditch and increased its capacity,” the email reads.

However, the issue did occur again, less than two weeks later. 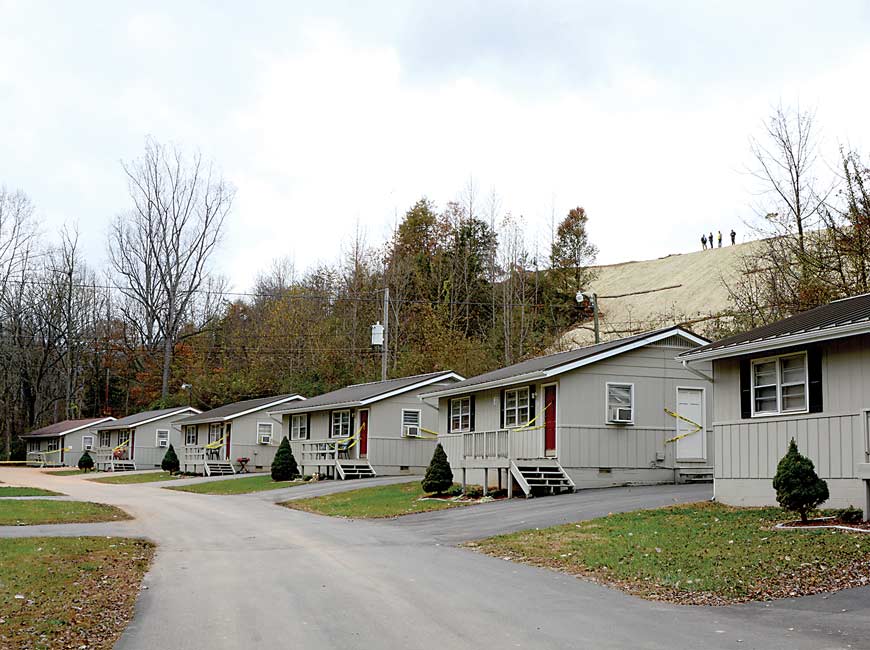 As of Nov. 7, four houses at Catamount Homes in addition to the condemned building were under evacuation orders. The Millennial Apartments site is visible above the horizon. Holly Kays photo

The county does have some capacity to act, though, and it is certainly looking to do so.

“As you know, your site located off of Dr. Killian Rd. in Cullowhee and identified as the WCU Millennial Apartments has had repeated instances of off-site sedimentation coming from your grading activities,” Elders wrote. “This is to inform you that continued instances of off-site sedimentation from your project may result in suspension of all building inspections on the site until the sediment damage has been remediated and the cause of the problem is remedied.”

Elders made good on that promise with a Nov. 4 letter stating that building inspections would be suspended until the evacuation order at Catamount Homes and any notices of violation were lifted.

In response to concerns from the Jackson County Planning Board, the county’s planning department has been combing through its subdivision ordinance, under which the Zimmer development falls. Staff has issued a notice of violation involving sections of the ordinance pertaining to requirements for adequate aboveground drainage and prevention of off-site sedimentation. Until the issues are addressed, the notice says, approval of the project is suspended, and a revised erosion control plan with installation of associated erosion control measures are required.

If the apartments aren’t ready to rent according to the original timeline of fall 2020, WCU could find itself in a bind where housing is concerned. The university plans to demolish the existing Scott and Walker residence halls beginning in May, taking 1,150 student beds out of commission until new dormitories can be built in their place. The 500-bed Zimmer project, together with a newly completed 600-bed residence hall, would replace most of that capacity, but a delay in completing the Zimmer project could complicate matters.

“The whole problem comes down to how we’re going to stop what’s been done. How are we going to take care of those who have been injured?” said Commissioner Boyce Deitz. “And hopefully this development can go on and make something we can all be proud of.”