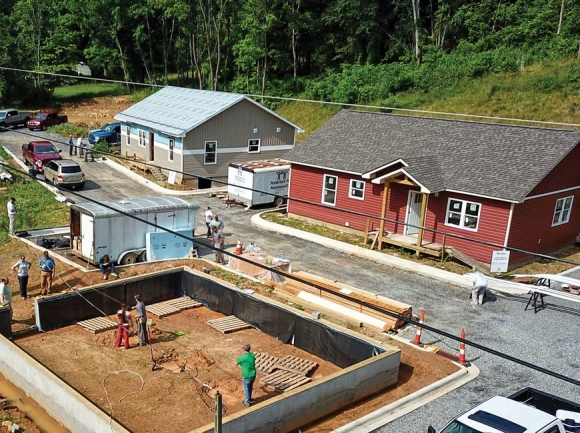 Haywood Habitat for Humanity is nearing completion of eight homes in the Walton Woods subdivision before starting a second community project in Chestnut Park.

The issue of homelessness has been a growing concern among Haywood County residents, businesses, law enforcement and government officials for the last several years.

Candidates running for the Waynesville Board of Aldermen recently attempted to address some of the concerns during a community forum held at Frog Level Brewing, but at the end of the night it was clear the forum was merely a starting point for a much bigger conversation about how all the different groups need to work together to solve the multifaceted problem.

As pointed out during the public forum, homelessness is just a symptom of a larger problem. Haywood County is experiencing a housing shortage, high rates of substance abuse and a lack of mental health and addiction recovery resources for low-income residents.

“The problem is there is no housing whether you have means or not,” said Jesse-Lee Dunlap at the forum.

Dunlap works with the N.C. Harm Reduction Coalition in Haywood County and sees firsthand the hurdles many people face when trying to overcome addiction and finding housing.

“There is a huge resource gap between here and Murphy, which means people will come here that are not from Haywood, but they come here because of the Balsam Center for substance use disorder. It’s Maslow’s hierarchy — without food, housing or shelter people won’t survive and they definitely won’t thrive,” they said.

The lack of housing, and affordable housing specifically, has been at the forefront of many countywide discussions in the last several years. An Affordable Housing Task Force was formed in 2016 after Patsy Davis, executive director of Mountain Projects, gave the Haywood County Board of Commissioners a presentation on the crisis going on in the county.

An initial study showed that by 2020, less than 25 percent of the 37,756 homes in Haywood County will be valued at less than $150,000, and minimum wage workers currently need to work 86 hours each week to afford a two-bedroom home.

The task force then developed a strategic plan to address the issue in 2017, proposing the goal of developing 400 affordable housing units by 2028. The plan would require the passage of a general obligation bond and the establishment of a land trust in order to meet that goal. Now that the task force has completed its work, it’s up to public and private entities to work together to make it happen — and progress is being made.

The Waynesville Board of Aldermen designated itself as a redevelopment authority in January 2019 and the authority’s first action was to designate an area on North Main Street as a “blighted community” that needed to be redeveloped. The advantage of doing so was to give Haywood County a better shot at being approved for state tax credits through the North Carolina Housing Finance Agency. The tax credits would allow Atlanta-based developer Landmark Asset Services to redevelop the old hospital building on the corner of North Main and East Marshall Street into 54 affordable units for seniors and veterans. After three attempts at qualifying for the credits, Haywood got the final approval in August. Though the project could take another year to be completed, it’s coming.

In the private sector, two large apartment complexes are being developed in Waynesville — one will be a 200-unit apartment complex off Plott Creek Road and the other will be a 210-unit complex at the former BI-LO shopping center on Russ Avenue. Those developments will not be considered “affordable” but will be considered “workforce” housing with rent prices above $800 a month.

Still, these multi-million dollar developments will mean more property tax revenue for the town of Waynesville, and town and nonprofit leaders hope the additional housing options will take some pressure off the market and free up more affordable units for people working lower wage jobs.

“I would think it would because the market is too tight right now and if some of those units are freed up for low- to medium-wage earners that has to help,” Davis said.

Haywood Habitat for Humanity is also working toward its second subdivision in Waynesville. The first subdivision — Walton Woods off Davis Cove Road — is nearing completion with eight families that now own their own home. The affordable development was made possible by a land donation from Sarah Jane League and her husband Gary Smith, corporate sponsorships, private donations, volunteer hours and revenue from the Habitat ReStore.

A second 10-unit development is now in the planning stages for Chesnut Park, just behind the Frog Level District. Habitat was able to purchase the 3 acres on Sylvan Street for $140,000 and is looking to raise about $1 million over the next few years to complete the project. The Chestnut Park property is an ideal spot for more affordable housing because it will place residents within walking or biking distance from main hubs like Frog Level, downtown Waynesville and Russ Avenue.