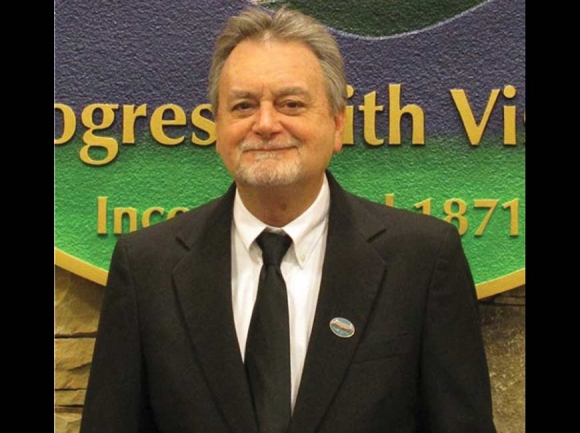 On Election Day, Waynesville voters could have chosen to send almost every single incumbent back to their seats, but when the new board is sworn in on Dec. 10, only two of the five will return to their previous positions.

“I’m very, very excited,” said Alderman Gary Caldwell, the only incumbent not seeking re-election to their seat. Caldwell instead ran for mayor against longtime incumbent Gavin Brown, and defeated him handily.

“I felt good about myself all along, and that’s not like bragging or nothing like that,” Caldwell said. “I didn’t have no idea I’d win by that margin. I thought it’d be a little closer than that, but I was really pleased.”

Caldwell took 57 percent of the vote against Brown, alongside whom he’s served for decades now, and admits replacing the professorial Brown will be no easy task.

“I’ll never say I could fill the shoes of an attorney. I mean, he’s awesome,” Caldwell said of Brown. “He’s got a photographic memory, and sometimes it made my day when he would ask me, ‘Gary, didn’t we do this years ago?’ I think both of us carry the past, and that helps when you move forward.”

“We’ve got an excellent board coming back and I think it’s just a good selection of different ideas from each person,” he said. “It’s going to be awesome, you know, with the new guys, Anthony Sutton and his Biltmore Farms experience, and then Chuck Dickson.”

With more than 1,300 votes, local attorney Chuck Dickson led the ticket; although considered a viable candidate with a good chance of victory prior to the election, many were shocked to see how well he actually performed at the polls.

“It’s hard to say exactly why the voters voted the way they did,” Dickson said. “But I think a large part of it was that I got out and talked to, and mainly listened to, citizens from all over the town. I think I probably traveled to every street in town and I knocked on over a thousand doors.”

Dickson said he learned “an awful lot” about Waynesville, and the extensive groundwork prepared him to represent citizens from diverse geographic and philosophical backgrounds.

“I just feel like he’s been there,” Caldwell said. “He’ll fit in probably quicker than maybe Anthony Sutton, because he has all that knowledge from being Maggie Valley’s town attorney and from being Clyde’s town attorney.”

Sutton’s no slouch, though — he’s spent several years on the town’s planning board and as such is familiar with how municipal boards operate, and with the issues facing the one he’s just been elected to.

“I think we’ve already started,” Sutton said. “We’re already starting to receive communications from the town, so I believe that we’ll be able to hit the ground running, right away.”

In 2015 Sutton ran for alderman but finished a disappointing sixth of seven with 590 votes, but this time around, he almost doubled that total.

“Anthony, all I see in him is a big ol’ heart,” Caldwell said. “I saw it when we had that forum down in Frog Level, that brought it out of him, and he just exploded down there. I think he means really, really well for the citizens of Waynesville. And that’s key, bringing that to the table.”

Joining Sutton and Dickson on the board and Caldwell in his new position are two familiar faces; returning for her third term will be Alderman Julia Boyd Freeman, and for his second term, Alderman Jon Feichter. Feichter finished just behind Dickson, and was followed by Freeman.

“John and Julia, they’re tops,” said Caldwell. “I am so happy for Julia because I feel like it’s great to have a woman on the board, and both of them are younger and they’re really energetic.”

The new board will definitely skew younger than the previous board, a double-edged sword — losing Brown and Alderman LeRoy Roberson, who finished last, means decades of institutional knowledge will also vanish from the board.

Retired DEA Agent Joey Reece finished just one vote ahead of Roberson, even though both pulled strong totals that would have kept them in the hunt for a seat in the 2015 election.

When asked about his first priority once he’s sworn in, mayor-elect Caldwell had an immediate answer.

The issue of homelessness has gained increasing prominence in Waynesville of late, especially in the Frog Level district, home to soup kitchen The Open Door. In the weeks before the election, homelessness emerged as probably the number one issue in the minds of many voters, especially after local businessman Clark Williams called for a community forum to address the problem.

All six aldermanic candidates were in attendance at Williams’ forum, as were both mayoral candidates, all of whom told a packed house their impression of the problem, and their ideas on solving it. Caldwell wants to continue the momentum from that forum.

“I’ve already spoken with [retired Waynesville Police Chief] Bill Hollingsed, and also I’ve talked to Sheriff [Greg] Christopher already and told him what I was doing,” he said.

Waynesville’s Assistant Town Manager Amie Owens will likely be tasked with filling the rest of the task force, according to Caldwell, who wasn’t yet sure if the task force would be Waynesville-only, or a countywide effort.

“I’d like to pull some folks from the soup kitchen, and from Long’s Chapel, and from Pathways, but honestly, I think the problem is in Waynesville,” he said. “I really do. It seems like everything is right here.”

Sutton supports the idea, but wants what he calls a task/action force to be as broadly constituted as possible.

“Homelessness doesn’t stop at the city limits,” said Sutton. “I definitely think that we should be countywide, and then we should also work with other homeless shelters and other task forces in the area, because I believe it is a county and a regional issue. Having it that way, you can get the best practices from other regions and areas to bring into Waynesville. Also, I would love it if Joey Reece was a part of that.”

Reece, a public safety-minded candidate, saw his “tough on crime” message gain a lot of traction during the election.

Dickson, too, seems to be on the same page as Caldwell and Sutton with the task force idea.

“It needs to be made up of all the stakeholders,” Dickson said. “Certainly, the people who are now helping homeless folks need to be talking, and we need the folks who are working on affordable housing. The mental health community. The court community. The district attorney’s office. Law enforcement of course needs to be a big part of it, and hopefully the new [Waynesville Police Department] chief will, when they are selected, be a big part of that.”

But Caldwell also wants regular citizens to be involved, to give the task force more credibility in the minds of residents — something Dickson also supports.

“We should ask for volunteers,” Dickson said. “It would be really great to get a healthy sample of the entire community, certainly some of the folks in Frog Level who indicated an interest in working on this problem. I think that there are plenty of people that would like to do something. We just need to be engaged and make it possible for as many people as possible to participate in this. This task force needs to be almost a multidisciplinary unit. You know, everybody needs to be at the table. So I’m really glad to hear that Gary wants to do that. I think that’s a great idea.”

Other priorities expressed by Caldwell include moving along on a proposed park off Craven Street, in Waynesville’s historically African-American district, and communicating better with residents who want to know what’s happening in town government, and when projects like Craven Street will begin and end.

With plans for replacing the town’s aging sewer plant well underway, there’s really just one more unresolved issue from Alderman Caldwell’s current board that will need to be addressed by Mayor Caldwell’s soon-to-be board.

“They should be down to five,” Caldwell said of the search process that will identify suitable candidates to fill the substantial shoes left empty by now-retired Chief Hollingsed. “I haven’t been questioning [Town Manager] Rob [Hites] too much about that, because I don’t want to think him to think that I’m stepping on his toes. Honestly, that’s his job to find someone.”

A search firm contracted by the town earlier this year will help narrow that field, with candidates eventually being put before the town board for final approval. Whoever ends up with the job, they’ll end up in the middle of the fight over the town’s homeless population — and in the middle of Caldwell’s task force — pretty quickly.

“There’s no way I would try to leave out the new chief,” he said. “They will definitely need to get their feet wet on that issue.”