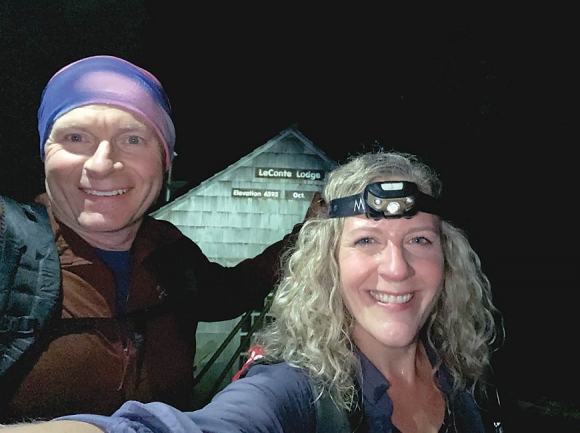 It was still pitch black during the first of Nancy East’s and Chris Ford’s three Mount LeConte summits on Friday, Oct. 25. Donated photo

The first time Nancy East visited the Great Smoky Mountains National Park, it was the 1990s and she was in veterinary school. But those squeezed-in backpacking excursions provided the catalyst for her later decision to move to Western North Carolina, and 25 years later, East finished hiking all 850 miles of trail running through the park’s 816 square miles of land.

East, 47, reached that milestone over Labor Day weekend, but the Waynesville resident swiftly found herself in need of a new challenge.

“I wanted to do something for the park, especially for the trails, but do more than writing a check of my own,” she said.

So, East decided to tackle the Tour de LeConte.

It’s not a decision that many have made. Completing the challenge requires hiking all six trails leading to Mount LeConte — a total of 44 miles by East’s count — within a 24-hour period. Only 35 people are known to have done it.

East wanted to do the hike as a fundraiser, setting up a donation portal through Friends of the Smokies where folks could give money toward rehabilitation efforts along Trillium Gap Trail, which is one of the routes to LeConte. Launched this spring, the two-year effort is supported by the Trails Forever program, a partnership between the park and Friends of the Smokies. The program aims to rehabilitate high-use and high-priority trails using private donations. With a maintenance backlog valued at $235.9 million as of September 2018, the park often lacks the federal funding it needs to address important issues like trail degradation.

She didn’t do it alone. East completed the hike alongside Chris Ford, 51, a retired Air Force veteran who lives in Knoxville, Tennessee. The two met through a hiking MeetUp group they’re both part of — they hike well together. With the leaderboard containing a record time for male hikers of 10 hours and 3 seconds, set by Dave Worth in August 2011, Ford didn’t post the fastest time on the men’s side. But he and East together set the fastest known time for a mixed-gender hiking team. While moving, they set an average speed of 2.91 miles per hour, with an overall average speed of 2.73 miles per hour.

For pretty much anybody, 44 miles in a day is a lot of miles. In the weeks preceding the hike, East and Ford trained. Each week, they’d go on a long hike of 30 miles or more, along with a “shorter” hike of 10 to 15 miles and some weight training in the gym. Conditioning her feet was the main thing, said East.

“My legs felt strong the whole time, but my feet definitely had to get toughened up to that kind of mileage,” she said. 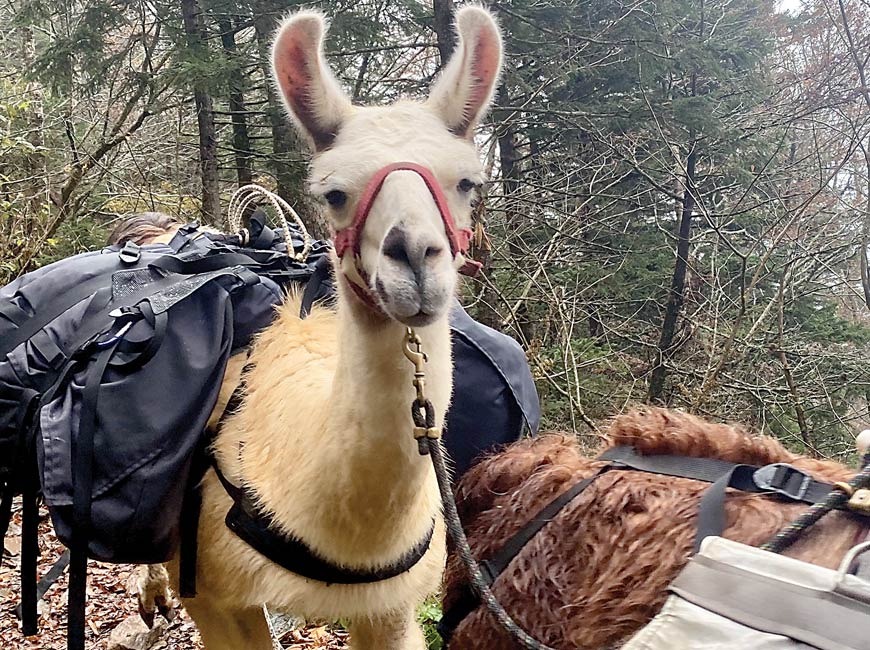 The hikers met some llamas on their way up Trillium Gap Trail. Donated photo

Hiking in the dark

“It was nutty,” she said. “And that was the hardest thing for me psychologically.”

After waking up from where they’d camped at Greenbrier Campground, the two ate some breakfast and drove to Cherokee Orchard, starting out on the Bullhead Trail by 2 a.m.

For East, Bullhead has long been the hardest of the six trails on the day’s itinerary. It’s 6 miles long with an elevation gain of 1,600 feet, and the wildfires of 2016 left it exposed to the sun and wind. In training hikes, done during sunnier parts of warmer days, East had found the trail hot and difficult, it was cool in the pre-dawn hours, the city lights of Gatlinburg spread out below.

“We just zipped up it, and it was wonderful,” said East. “It set a nice stage for the hike, knowing that one was over.”

By 4:18 a.m. they were on top of LeConte, where they took a seven-minute break to refill water bottles, use the bathroom and eat a quick snack before descending once more, this time via the Boulevard Trail.

Heading downhill, the cool air was a problem, causing East’s legs to cramp. A thick fog rolled in, but they pressed on, making it down to Newfound Gap by 7:08 a.m., where they’d left Ford’s car. From there, they stocked up on snacks and drove to the next trailhead, starting on Alum Cave Trail at 7:31 a.m. Despite having already hiked 14 miles that day, they finished the 5-mile trail just seven minutes slower than they had during a training hike the previous week, on fresh legs.

Once more atop LeConte, the two repeated their quick routine of bathroom break, water refills and snack time before taking the Rainbow Falls Trail down for their second descent, this time with the sun risen and the peak fall colors fully visible. It was while hiking Rainbow Falls that East felt the cramping in her legs subside and her spirits begin to lift. They “cruised” down the trail, before long reaching the parking lot to start their final ascent via Trillium Gap Trail at 11:44 a.m. 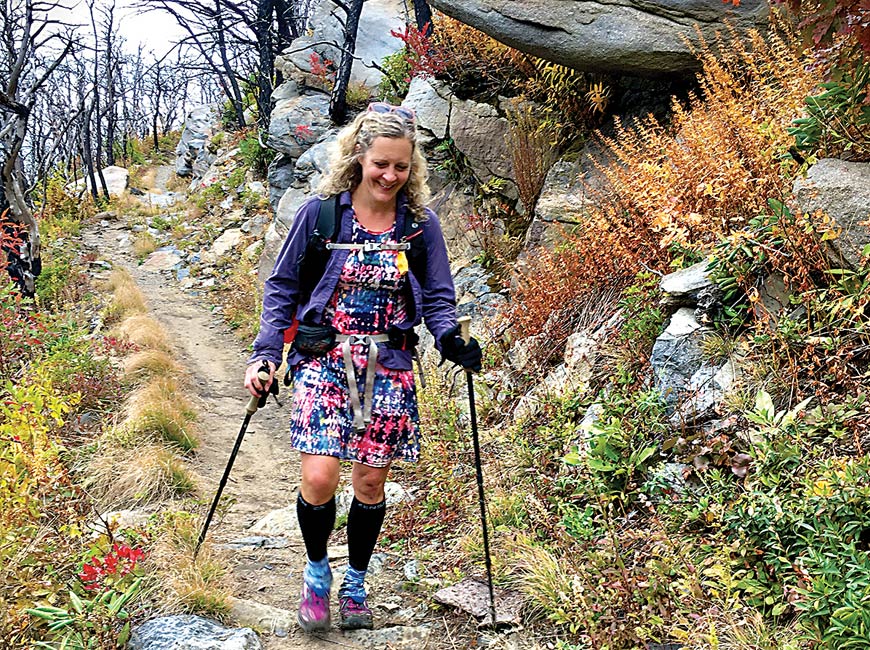 At 8.9 miles, it’s the longest trail of the six, and by the time they started it East and Ford had been awake for 12 hours, having hiked nearly 30 miles in that time. Around 1:45 p.m., the rain rolled in and fatigue was beginning to take its toll — at one point around 2 p.m., East recalls, she couldn’t even do the basic math in her head needed to figure out how much more hiking they had to do.

“Mentally I was definitely starting to get a little fuzzy, but as far as mental attitude I was positive and felt like we were both really in good spirits the whole time,” she said. “I think that’s so key.”

But if East’s spirits needed a boost, they got it when she summited LeConte for the final time that day. At the top of the mountain was her best friend, Diana Laursen, waiting in the drizzle for the hikers to arrive.

“It was this gift from the heavens coming out and greeting us,” East recalls.

She hugged her friend, took a picture, and was soon on her way once more. Laursen didn’t hike down with them — she didn’t want to slow down her friend’s pace.

By this time, East and Ford were in the final stretch, just a handful of miles away from completing the challenge they’d set out to conquer. Their spouses were supposed to come and pick them up, and seeing them waiting there, partially hidden beneath umbrellas, was the day’s biggest reward.

“It was one of those life moments you never forget,” said East. “The way the trail ends, there’s a long stretch that you could see that trailhead, so as we got closer we could kind of start making out those umbrellas and then the shape of those bodies, and then we realized, that’s them. So that was really special.”

East slept hard that night and enjoyed the Chick-fil-A salad and milkshake her husband had brought her. But she’s already itching for the next challenge.

“I need to regroup and think about it more, but something I’m sure will pop into my head,” said East. “I just need a good, long hike to figure it out.”

The Tour de LeConte is a challenging endeavor even for seasoned hikers, but those interested in attempting the feat can learn a lot by reading Nancy East’s account of her experience and FAQ page on her blog, www.hopeandfeathertravels.com. LeConte stories, including the leader board for the Tour de LeConte, are available at www.lecontelog.blogspot.com.

The fundraiser associated with Nancy East’s and Chris Ford’s Tour de LeConte effort is still open at www.friendsofthesmokies.org/product/nancy-east-chris-ford-fundraiser. Donations of all sizes are welcome.

“It doesn’t have to be a big amount,” said East. “We just need every person who loves the Smokies and loves LeConte to donate less than 10 bucks.”