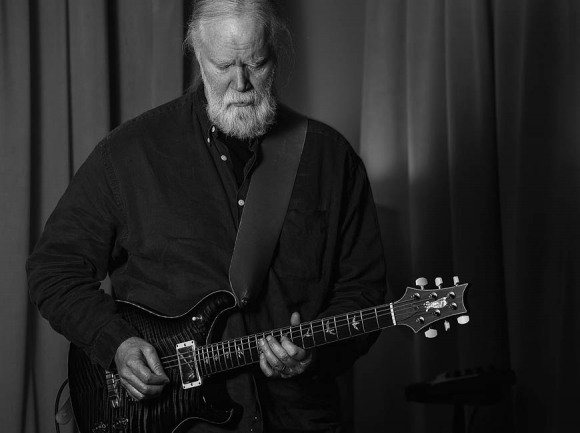 First coming to prominence in the Atlanta music scene of the late 1980s, Herring hailed from the school of cosmic thought that is the late Colonel Bruce Hampton. The duo (alongside Oteil Burbridge and Jeff Sipe) formed the iconic Aquarium Rescue Unit, a jazz fusion group that blurred the lines not only between melodies, but also what it truly means to explore a soundscape, and just simply let go.

Now 57, Herring is once again taking his bountiful solo endeavors on the road between Widespread Panic tours. With his latest band, The 5 of 7, Herring is sharing the musical wisdom and hard-earned truths of Hampton with audiences around the country and overseas.

And it’s that knowledge from the Colonel that Herring holds close to his heart and his attitudes toward playing, especially with this new project, where all the other musicians involved have at one time or another also played and collaborated with Hampton.

It’s about suspending your restless mind, your perceived notions of live performance, and to be present in the moment you find yourself currently immersed in. And when one can channel that Zen zone of no expectations with no limitations — a space Herring pursues and happily inhabits on a nightly basis — a true sense of endless sonic possibility comes to fruition.

Smoky Mountain News: Every member of this new group has played at one time with the late Colonel Bruce Hampton. Right out of the gate, you have this camaraderie that is pretty priceless.

Jimmy Herring: It is. And you know, the fact that we’ve all worked with Bruce, I wouldn’t call it a prerequisite. It didn’t have to be that way, but if it could be that way, it was a good thing in my mind. Because once you played with him and the other people that have played with them, even if it wasn’t at the same time, you share something in common with them. It’s sort of like an extended family, you know?

Bruce would teach you about things without actually saying, “OK, I’m going to teach you something now.” He led by example and you just had to be open and alert. And one of the things you learned from him is, “Don’t sweat the small stuff.” Get out on the road and things will go wrong and you can’t let it ruin everything. That’s one of the things I like about working with people that had been with him, because nothing breaks them — you’re playing for the cause, and the cause is not playing for the wrong reasons.

SMN: Well, I was watching some recent clips of The 5 of 7. And even though it is “your band,” it comes across very diplomatic. Is that what you intend for when fronting your own project?

JH: Yes. I’ve never really liked the idea of my name being out in front of anything. I’m kind of uncomfortable with that. The idea is that we’re all there. We all have the travel, we all have to be away from our families. So, to me, I just look at it like we’re all equal.

I’m the oldest guy — a lot older — but at the same time, they know that their opinions are just as valid as anyone else’s. Everybody gets to play and you play as long as you have something say. Nobody goes, “OK, you can take solo, but it’s only going to be 16 bars.”

SMN: To your point, legendary bassist Ray Brown once said, “It’s not about playing too fast or playing the solos, but to get a good sound and play in tune.” Do you take anything away from that statement as a guitar player?

Jimmy Herring: Absolutely. I see that as a musical statement that doesn’t pertain to any particular instrument. And a lot of us look at music that way. Nobody really cares about your “bitchin’ technique” if you don’t sound good and make things feel good. Sure, there’s going to be times when things are out of tune. And that’s all relative to “being in tune,” because guitars are probably never in tune — the instrument’s nature is probably never going to let it be totally in tune. Sounding good and being in tune, I would put that way above technique or anything like that.

SMN: And one of the beauties of improvisational music or improvisation within a structured song is that it eliminates complacency.

JH: Yeah. Every night when we go onstage, what we’re shooting for is to have it be different than it was the night before. We try to approach everything with no preconceived notion other than playing those songs. And when the improvised sections come in the music, all bets are off. Anything can happen — that’s the idea.

Jimmy Herring & The 5 of 7 will hit the stage at 8:30 p.m. Friday, Nov. 8, at The Orange Peel in Asheville. Roosevelt Collier will open the performance. Tickets are $25 in advance, $27 day of show. For more information and/or to purchase tickets, click on www.theorangepeel.net. For more on Jimmy Herring, go to www.jimmyherring.net.