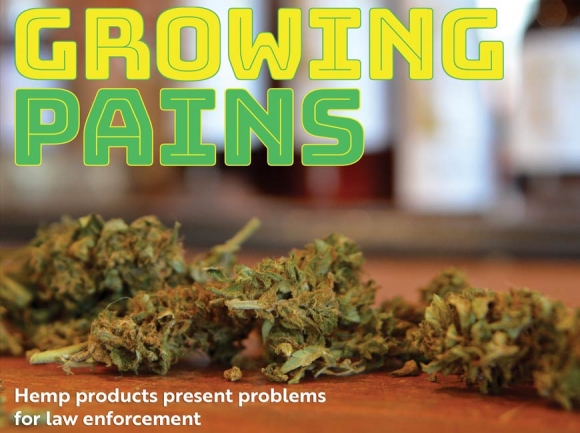 Abundant Labs CEO Chip Miller looked like a college chemistry professor as he started drawing diagrams and compound percentages on the blackboard while trying to explain what it is the new enterprise is doing in Canton.

The Abundant Labs partners announced this summer they would be opening the $12 million state-of-the-art hemp processing facility inside the NEO Corporation building off I-40 in Canton and has now been in production for a month.

It’s an exciting new venture for Miller and the rest of the growing staff, he said, but there is still so much misinformation around the budding industry of hemp. Part of Abundant Labs’ mission is to educate the community about the industry and all the beneficial products being made from the medicinal plant.

“The biggest challenge in this industry is the misinformation,” said Phil Ferguson, another Abundant Labs partner and a local real estate broker. “The education of the general population is critical to understanding the benefits of the plant.”

Ferguson, a Haywood County native, has long been fascinated with the history of hemp — Hemphill Bald for example — and the benefits the plant has provided to people of Western North Carolina. Hemp seed was grown in these parts to support the World War II effort and the first diesel train engine was designed to run off hemp oil. 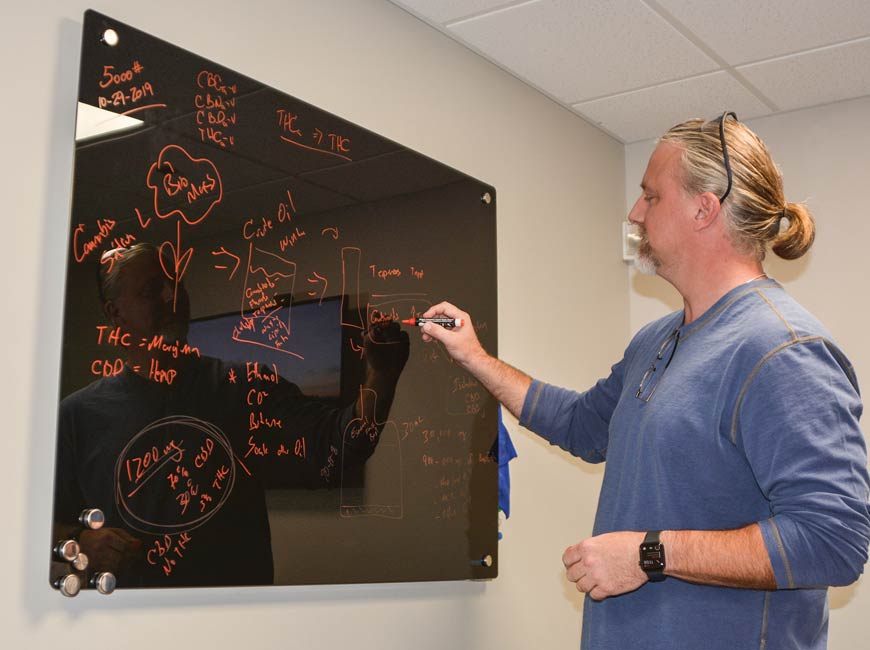 “With all the benefits, it never made sense to me why it was made illegal, so I’ve kept studying it,” Ferguson said. “I was definitely the hemp enthusiast of the group.”

Miller brings to the table a background in banking and finance, but through the process of bringing the investing partners together and leading the day-to-day operations, he’s also become well versed in all the scientific processes behind the business.

Back to Miller’s etchings on the blackboard — Abundant Labs receives hemp biomass at its facility from different growers and uses it to make a specific product for a client, which will either be a full spectrum extract or a CBD isolate from the plant. This is where it gets a little confusing for people, but first you have to understand the many components of the hemp plant. The hemp flower is made up of hundreds of cannabinoids, though their focus is on the big ones — CBD, CBG and CBN. THC is also a cannabinoid that’s in the plant and one of the main ones Abundant Labs is asked to extract from the plant before creating the final product for a client.

A full spectrum extract captures all of the available compounds from the trichomes and leaves behind the undesirable fats, waxes and lipids from the plant. A full spectrum extract maintains those other cannabinoids that work together to heighten the effects on the body for those taking the product. The final result is a crude oil that businesses can use in a wide range of products.

The CBD isolate, on the other hand, takes the process a step further by isolating only the CBD cannabinoid. The final product is a powder that contains only pure CBD.

Miller said the extraction process starts with using an ethanol solvent to begin separating the parts of the plant — waxes, fats and lipids are removed. Those waxes and lipids can then actually be sold separately and used to produce salves and other wax-based products.

Then there is a distillation process to further separate the components — the terpenes come out at a certain temperature and then other cannabinoids at a higher temperature.

“The full spectrum product is the end result of that process,” Miller said. “With that, we can create an isolate and separate just the CBD and that’s the powder product.”

The emerging industry is still experiencing growing pains as regulations are still rolling out, and the public is still learning about what’s legal, what’s illegal and what exactly they’re buying when they purchase a CBD oil or other hemp products. The percentages of CBD shown on the packaging can be deceiving, according to Miller. When you buy a 30 milliliter bottle of CBD oil, most of that is going to be the carrier oil — hemp seed oil, olive oil or some other essential oil — and the rest will either be the full spectrum extract or some kind of CBD isolate.

“We do our own testing in house so we’re sure of what we’re making. We’ve also tested products off the shelf and find out it’s not what it says it is,” Miller said. “There’s a chase to the bottom in the industry — everyone is trying to get into the market with the cheapest product possible and it’s a consumer beware market right now, but our specific customers are focused on long-term quality.”

Abundant Labs is a business to business company as not to compete with their clients. A majority of their clients thus far are well-established retailers who want to add value to their existing products by introducing a hemp component. Miller said Abundant Labs is able to produce a 99.2 percent pure CBD product.

Other key players at Abundant Labs include Gary Hughes, owner of WNC Urban Farms and the farmer who holds the industrial hemp grower license that enables the processing center to operate in North Carolina; Chief Science Officer Stephen Nerlick, who worked at a large blood lab before joining Abundant Labs; and Operations Manager Gary Hughes, who is an electrician and has experience working on large equipment. 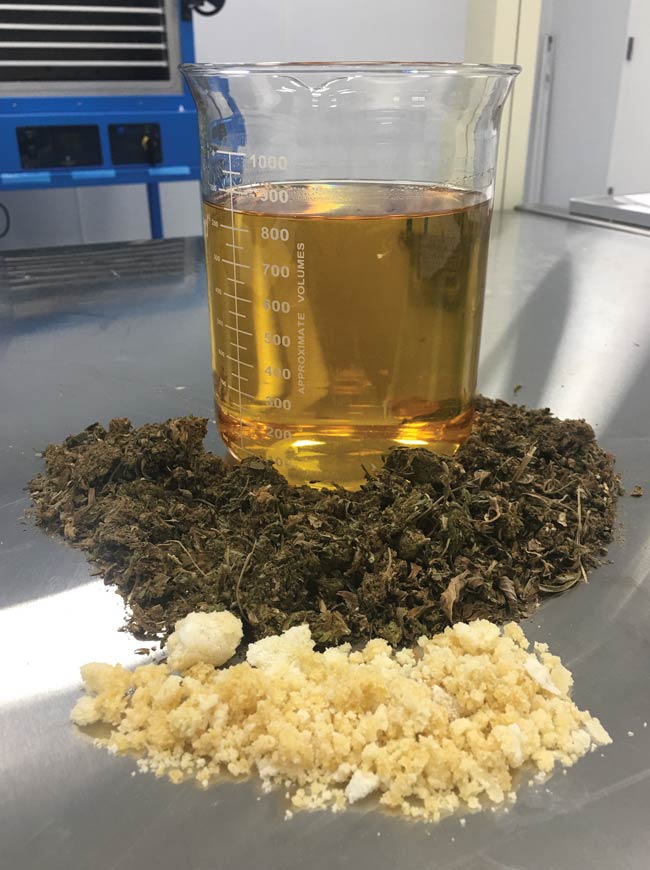 The Smoky Mountain News wasn’t allowed to take photos within the production facility because so much of the equipment has been fabricated specifically for their processes and they don’t want their trade secrets to be exposed.

Ferguson said their staff is also working on water soluble products as some of their clients are interested in different liquid products, including a dairy farm that’s interested in adding CBD to milk. Abundant Labs has found that the powder product works better in hot drinks while the liquid product works better for cold drinks though it adds a little different taste.

“The terpenes give it the taste and smell, but we can remove about 95 percent of that,” Miller said. “But some clients want that taste and smell. There’s a beer manufacturer actually looking into using terpenes to market a hemp beer.”

Other industries looking to infuse hemp into their products are makeup companies — Miller said CBD has been shown to reduce inflammation, which would make for a great eye cream. Athletes are looking to CBD products to reduce pain and inflammation but it has to be completely free of THC so it doesn’t show up in a drug test (even though hemp already contains 0.3 percent or less of THC).

Another part of their business is to help the increasing number of growers in the state move their biomass after the harvest, which has been a main concern for farmers interested in getting into the hemp business. However, Abundant Labs’ equipment and processes require larger batches than some local farms can currently provide. Each batch is different and parameters have to be altered each time. From start to finish, the process from hemp to final product takes two to three days.

“We feel like we have a social responsibility to help farmers,” Ferguson said. “But most of the hemp farms around here are small and we really need at least 500 pounds to do the extraction process — not 100 pounds,” Ferguson said.

As Abundant Labs ramps up production, Miller said the number of employees will also grow. While they currently have a dozen employees, he said that number is expected to grow to 45 in the next couple years. Several of the company’s employees are specifically skilled in different aspects of the business but there’s also room employees to be trained on the job for the lab’s specific processes.