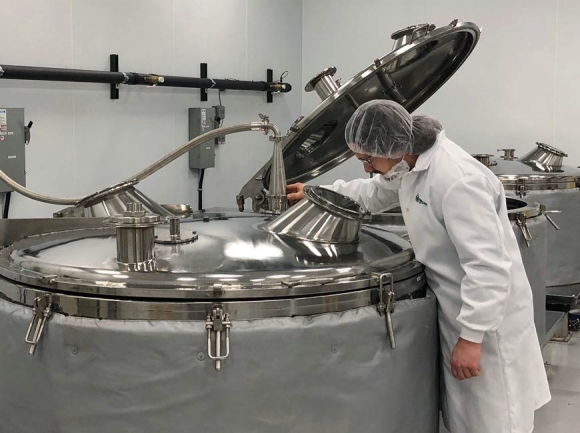 Abundant Labs in Canton is one of many processing facilities started up following the legalization of industrial hemp in North Carolina. Donated photo

Hemp is from the cannabis plant, and if hemp and marijuana are laid out side by side it’s almost impossible tell the difference between the two. They look the same and smell the same, but the hemp doesn’t have the THC concentration that produces the high like marijuana. That means law enforcement officers also have a hard time distinguishing between the two plants — as do police dogs.

“I foresee problems in the future. I’m surprised we haven’t had any problems yet, but the major problem I see occurring is with our dogs that are trained on marijuana and they will indicate on marijuana and hemp,” said Macon County Sheriff Robbie Holland. “In the future when we look for K-9s, we’ll have to make sure they’re not trained to detect marijuana. That’s not what we prefer to do but that’s how it is with today’s times.”

Not being able to distinguish marijuana from hemp makes it more difficult for law enforcement and prosecutors to build a case. Holland said the N.C. State Bureau of Investigations (SBI) lab won’t distinguish between the two plants when it involves minor charges — it has to rise to the level of felony charges.

“It will definitely make it difficult, but so far we’ve had no cases of this and no failed prosecutions because of it but we’re ready for it,” he said.

North Carolina joined 33 other states in legalizing Industrial hemp with the passage of the 2014 Farm Bill, which spurred the creation of the Industrial Hemp Pilot Program. According to the original legislation, the idea was to allow farmers to begin growing industrial hemp as a way “to promote and encourage the development of an industrial hemp industry in the State in order to expand employment, promote economic activity, and provide opportunities to small farmers for an environmentally sustainable and profitable use of crop lands that might otherwise be lost to agricultural production.”

Now there are more than 630 farmers growing hemp on about 8,000 acres and 3.4 million square feet of greenhouse space, including Appalachian Growers in Macon County and Gaia Arise Farm in Canton. There are also more than 400 licensed processors in the state, including a new processing facility in Canton — Abundant Labs.

Abundant Labs currently employs a dozen people with plans to grow to more than 40. Appalachian Growers employs up to 50 people during harvest season and Gaia Arise Farm will soon open a retail store in downtown Waynesville. Suffice it to say the industry is booming in Western North Carolina.

But with growth also comes growing pains. Those within the industry have compared it to the “Wild West” where anything goes right now as state and federal agencies try to rein it in with new regulations.

Legislators and law enforcement wanted to keep smokable hemp illegal, but that language didn’t make it into the final version signed into law. In the meantime, growers and suppliers have been able to sell smokable hemp. Customers can walk into the Gaia Arise Farms Apothecary on Depot Street in Waynesville and purchase a small baggie of smokable hemp or a “hemp stick” that looks nearly identical to a marijuana joint.

This raises a number of questions. Can I carry this around on me? Can I smoke this hemp in the car? What happens if I get pulled over and the officer thinks it’s pot? How can I prove it’s hemp? Will I get arrested?

These are good questions, but unfortunately no one really has a direct answer. Some law enforcement weren’t even aware smokable hemp is currently legal. When contacted for comment on the issue, Swain County Sheriff Curtis Cochran said he didn’t think it was legal and hadn’t been notified by the N.C. Sheriff’s Association to the contrary.

“I’ve received no notification that it’s legal,” he said. “We do have a drug store in Bryson City selling CBD oils, but with the Farm Act I thought they pulled smokable hemp out. That’s one thing we were all opposed to.”

Efforts to ban smokable hemp continue in Raleigh. Senate Bill 315, which would update the Farm Act to ban smokable hemp as of June 2020, is still working its way through committees in the General Assembly. A vote was expected next week before the measure goes to Gov. Roy Cooper’s desk for final authorization.

Lori Lacy, co-owner of Appalachian Growers in Macon County, understands law enforcement’s frustrations as the industry works on navigating the new frontier, but she also sees other ways of smoothing out the process without a blanket ban on smokable hemp. She said the technology exists to distinguish between hemp and marijuana — it just needs to be made available to law enforcement and/or the SBI lab’s hands.

“Definitely education and technology would be a plus,” she said when asked about possible solutions to the problem. “The cart got ahead of the horse a bit. Regulations are necessary, however our hope is that we are able to have some lead time to sell the current crop and plan for the future. I am at a Hemp Industries Association (meeting) In Charlotte and the whole industry is working on solutions.”

The North Carolina Industrial Hemp Growers Association has also been lobbying for an alternative solution to banning the smokable product. Executive Director Blake Butler was just leaving the same Hemp Industries Association meeting on Monday when contacted for an update.

“Our outreach efforts have included working on House members and appealing to the governor. As this point, I hate this has been thrown back and forth but we’d still like to see some stand-alone legislation for hemp so all our provisions are not hidden in the Farm Act. That would be a better way to approach it,” he said.

Butler said the SBI is currently looking at a short list of vendors provided by the Drug Enforcement Agency (DEA) that can potentially develop such a field test, but it could still be another four to six months before one is chosen.

In the meantime, hemp farmers are concerned the ban will leave them holding on to a bunch of product they can’t move.

“We don’t want to start our program with any kind of ban on a compliant plan. The federal law is specific that if it’s 0.3 percent or less THC, it’s an agricultural commodity and they’re still trying to treat it like a psychoactive drug,” he said. “This just popped on law enforcement’s radar this year and we need a chance to address it.”

The federal government is also working on regulations for hemp and related products. Just last week the U.S. Department of Agriculture released proposed interim rules on how hemp can be produced. The ruling includes provisions regarding the land where hemp is produced, testing the levels of THC, disposing of plants not meeting necessary requirements, licensing requirements and ensuring compliance with the requirements of the new part.

Butler said the proposed interim rules from USDA will be open for 60 days of public comment before a final vote. He said there is still a lot of concern about the strict testing protocols that could still be burdensome on southern hemp growers trying to move their product across state lines.

Stuart Titus, CEO of Medical Marijuana Inc., the first publicly-traded cannabis company in the U.S. and the first to sell hemp CBD across state lines and international borders, stated in a press release that the new regulations had received bipartisan support and would “soon become the fire that will ignite hemp to again become the crucial cash crop it once was when our country was founded.”

Bruce Perlowin, CEO of Hemp Inc., the largest industrial hemp processing center in the western hemisphere and future producer of KING OF HEMP pre-rolls — the first trademark registration for hemp cigarettes — said the industry has come a long way since the decades-long ban on hemp.

“From lifting the ban to the first harvest in 80 years, we will now gain clarity on an array of hemp-specific policies such as safety and quality control standards. Growers, especially small farmers, will benefit from the expansion of crop insurance, standards and infrastructure that can be built out based on the sheer certainty that comes with uniform regulations,” he said. “We’ve also been working to educate law enforcement. They are frustrated and we get it. We’re trying to satisfy their concerns but what they need is a reliable, mobile field test and that’s not there yet.”