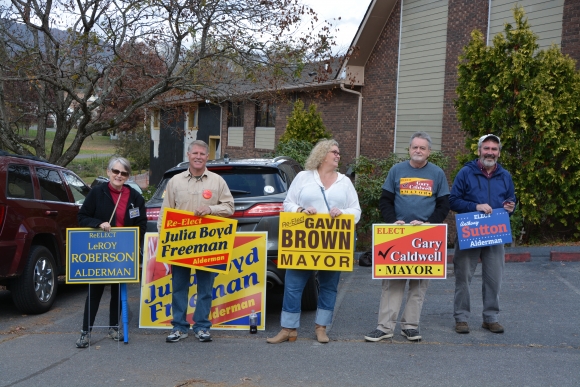 At 10:20 a.m., elections officials at Waynesville’s largest precinct, WS-1, reported 92 voters. Mayor Gavin Brown, along with aldermen LeRoy Roberson, Jon Feichter and candidate Anthony Sutton were gathered at the library, holding signs and shaking hands. In the 2015 election, WS-1 counted 1,864 votes by the end of the day.

Waynesville’s second largest precinct, WS-2, reported 82 voters as of 10:30 a.m., a far cry from the precinct’s 2015 total of 1,513 votes. Alderman Gary Caldwell, running for mayor against Brown, was there, along with Brown’s daughter Kim.

Check back for more on the General Election throughout the day, and look for final results tonight on www.smokyountainnews.com.